US President Donald Trump a public health emergency in relation to the rising instances opioid drug abuse in the nation.

The President called the pain-killer addiction a “national shame”.

The American government has historically waged a sustained campaign against drug abuse. The term that is used to describe the campaign is often called the War on Drugs. This term was especially popularized after 1971 during President Richard Nixon’s term. According to the Drug Policy Alliance, United States spends $51 billion annually on these initiatives. The Office of National Drug Control Policy, which is part of US’ executive branch, evaluates, coordinates, and oversees both the international and domestic anti-drug efforts.

Opioids are drugs that act on the nervous system to relieve pain. Continued use and abuse can lead to physical dependence and withdrawal symptoms.

It is estimated that more than 90 Americans die daily from overdose of opioids. The addiction to opioids akin to heroin and fame relievers is a serious matter. It affects public health as well as social and economic welfare.

According to Goldman Sachs, opioid abuse is one of the reasons why many people are not seeking work.  The Centre for Disease Control estimates that prescription drug abuse costs about $78.5bn (£61.5bn) annually. This cost is related to increased cost of health care, loss of productivity, and those associated to criminal activity. 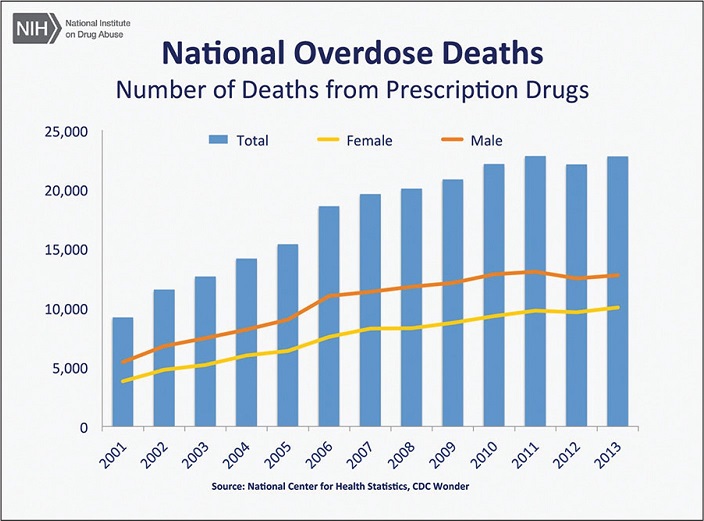 It is unclear whether opioid abuse is a symptom of economic malaise. Economists are perplexed over the decline in labour force participation rates, the share of people looking for jobs. This index has declined from 67% in the 1990s to 63% in 2017. The decrease is more pronounced among men. In the intervening period, the percentage of women who looking for jobs has increased from 42% to nearly 57%.

The US accounts for 5% of the global population but consumes 85% of all opioids. The US National Centre for Health and Statistics has revealed that in the year 2015, there were 50,000 drug related deaths in the US, of which 30,000 were related to the use of opioids.

US President Donald Trump has introduced a new plan to fight the rising opioid abuse. He has dubbed it a “national shame and human tragedy” and has ordered the declaration of a public health emergency. “The United States is by far the largest consumer of these drugs, using more opioid pills per person than any other country by far,” he said. “No part of our society – not young or old, rich or poor, urban or rural – has been spared this plague of drug addiction.”

He added, “Beyond the shocking death toll, the terrible measure of the opioid crisis includes the families ripped apart and, for many communities, a generation of lost potential and opportunity. Nobody has seen anything like what’s going on now. As Americans we cannot allow this to continue. It is time to liberate our communities from this scourge of drug addiction.” The President did not provide any further clarity on how the administration intends to do just that during his speech.

The Trump administration also did not provide clarity on how the Public Health Emergency Fund will fight the opioid crisis as it reportedly only contains $57,000. The Presidential memorandum he has signed orders all federal agencies to take measures to reduce the number of opioid deaths.

Additionally, federal agents have arrested billionaire pharmaceuticals entrepreneur John N. Kapoor.  He has been charged with leading a nationwide criminal conspiracy to illegally distribute an addictive prescription painkiller. He is the founder of Insys Therapeutics. William D Weinreb, acting US attorney in Massachusetts, said the charges, filed on Thursday, showed authorities are attacking the opioid problem at many levels. "We must hold the industry and its leadership accountable - just as we would the cartels or a street-level drug dealer," he said.

The company has not publicly commented on the indictment. Shares of the firm plunged by 20% after the charges were announced. The company was apparently bribing doctors to over-prescribe opioids in order to boost their own sales. The company and the Indian-origin Kapoor have been under investigation for years. Authorities have also taken action against employees of the company in the previous years.

Our assessment is that the continued use of opioids will affect public health safety. As predicted earlier, it will also lead to the rise in incidences of neonatal abstinence syndrome due to opioid use during pregnancy. We believe that Phencedyl and Corex containing the highly addictive opium base Codine Phosphate are the opioids mostly used in India. Use of opiates like Fortwin an analgesic Benzo Diazepine derivate drug valium is quite common in the country.  With the brain playing the role of a laboratory, the only thing the law can do is to play the catch-up game.