Nasa has warned that water shortages could be the major environmental challenge of the century. In a recent study, the organisation noted that global..

Nasa has warned that water shortages could be the major environmental challenge of the century. In a recent study, the organisation noted that global freshwater reserves had changed drastically in the last decade. These changes mirrored climate change models.

The world today faces a crisis of water availability. Only 1% of all fresh water in the world is freely available for use. According to the World Resources Institute, more than a billion people in the world live in water scarce regions, and approximately 3.5 billion could be living with water scarcity by 2025. The World Health Organisation estimates that 850 million people don’t have access to safe drinking water. As freshwater reserves are drained, sea levels continue to rise at an estimated 3.2 millimetres a year.

According to the World Bank, in 2014, the world on average withdrew a total of 9.2% of its internal freshwater resources: almost 4,000 billion cubic metres. To put this in context, the total global renewable freshwater resources in 2014 were approximately 43,000 billion cubic metres. Some experts speculate that by 2030, the global demand for fresh water will exceed the supply by 40%. This demand is primarily for agriculture and food production.

Early this year, it was announced that Cape Town in South Africa would become the first city in the world to run out of fresh water. It was estimated that the city would reach “Day Zero” by May 11th; however, the government has managed to push this date until 2019. Cape Town is not an anomaly. Analysts have speculated that a number of cities across the world could be susceptible to a similar crisis. The broad characteristics of these cities are high population density, poor water governance policies, and polluted or depleted local sources of water.

India holds 4% of the world’s freshwater but houses 16% of the global population. According to some studies, in 2011, India used 245 billion cubic meters of groundwater for irrigation: 25% of the total groundwater withdrawn that year. According to the Central Water Commission, rivers are a key source of freshwater in the subcontinent, for domestic, agricultural, and industrial use. 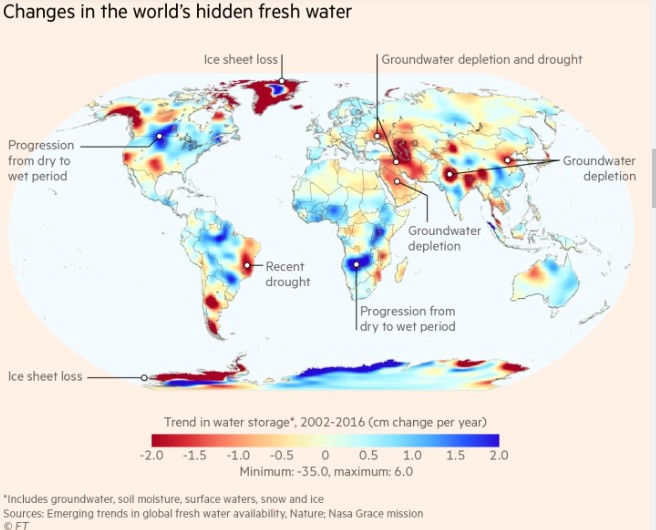 A recent NASA report based on data from Gravity Recovery and Climate Experiment (GRACE) satellites showed that the distribution of global freshwater reserves has changed dramatically since 2002. Regions including northern and eastern India, Middle East, California, Australia, North-Eastern China, and the Caspian Sea have seen a drastic decline in freshwater availability. The study named 34 areas across the world that have seen such changes; in 14 places, the changes were due to direct human activity, and in 8 where they were due to changes in climate.

“What we are witnessing is major hydrologic change. We see for the first time a very distinctive pattern of the wet land areas of the world getting wetter, in the high latitudes and the tropics, and the dry areas in between getting drier,” said co-author Jay Famiglietti.  “Within the dry areas we see multiple hotspots resulting from groundwater depletion… Any of these spots on the map are potential ‘Cape Towns’ in future,” Famiglietti said. “Fresh water availability is changing and water insecurity is much closer than we think.” Famiglietti noted that the pattern of “wet-getting-wetter, dry-getting-drier” matches common climate change patterns, which is a cause for concern.

The study was based on data from 2002-2016, from gravitational satellites that measured the presence of water. It noted that the major changes occurred due to ice sheet and glacier losses. However, the study also emphasised the human role in these changes. Water withdrawal for human use was a primary cause of drying in densely populated regions such as north India and central Asia.

Irrigation and groundwater pumping was one major factor across the globe, particularly in northern India. Some key challenges faced in India include drought and the depletion of groundwater reservoirs, alternating with destructive floods and heavy monsoon rains. Data acquired from GRACE satellites from 2003 to 2014 showed that the greatest amount of water replenishment occurred in west and south India, particularly the states of Gujarat and Andhra Pradesh. According to some studies, this was primarily due to policy changes in groundwater management and conservation.

“In Andhra Pradesh, farmers have been trained in sustainable groundwater management practices, and there has been a discernable increase in irrigation via surface water,” NASA’s Earth Observatory noted. “Despite continuing groundwater storage depletion in some parts of the country, sustainable management strategies could help preserve the precious natural resource.”

Our assessment is that freshwater shortage is a global challenge. As stated previously, growing uncertainty of the hydrological cycle caused by climate change, combined with poor governance and management of freshwater reserves, has resulted in a global water crisis. We believe that more populous regions such as India could be among the first to be hit in such a crisis. We feel that food production and agriculture is a major area where implementing more sustainable policies could help reduce water stress.