As the U.S. embassy staff in Bogota display symptoms consistent with the Havana syndrome, the mysterious ailment has captured global headlines yet again. Although its causes remain unknown, speculations are rife that it may be a new form of energy weapon developed by adversarial powers.

Connoting a range of mental health symptoms experienced by intelligence and embassy officials, the Havana Syndrome is not a new phenomenon. True to its name, its roots can be traced to the capital city in Cuba.

As can be recalled, in 2016 - a year after the U.S. had opened its embassy in Havana, some diplomats had experienced troubling sensations like headaches, disorientation, insomnia and sudden bursts of pressure in their brains. Many of them had also reported unusually high and low-pitched sounds in their ears. This caused the embassy to be shut down a year later, as concerns grew over the welfare of the staff.

At the time, there were competing theories about the origin of the syndrome. While some ascribed it to a psychological illness, others hypothesised that it was a form of weapon deployed by nefarious actors. Both these theories, however, were never conclusively proven. 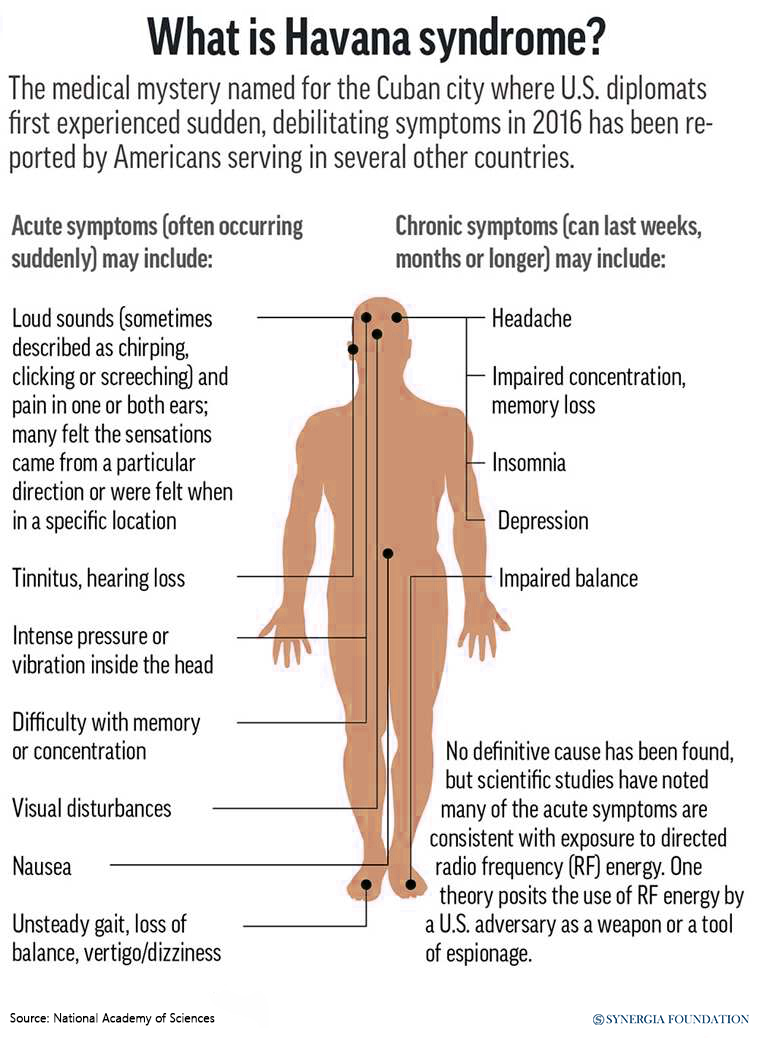 Following the events in Cuba, the Havana syndrome and its debilitating conditions were detected in American and Canadian diplomats around the world. The victims were mainly posted in countries like China, Taiwan, Russia, Kyrgyzstan, Uzbekistan, Georgia, Serbia, Austria, Berlin, Poland, Colombia and the United Kingdom. More recently, the symptoms were observed in two officials at the U.S. embassy in Hanoi, delaying Vice President Kamala Harris' trip to Vietnam in August 2021. Similarly, a CIA officer who travelled to India a month later also experienced something comparable.

Now, with the latest reports trickling in from Havana, it is estimated that around 200 officials have been diagnosed with the syndrome worldwide. While many of them are CIA agents and their families, the rest are split between employees of the State and Defence Departments.

In most cases, the illness appears to start with a peculiar sound, which has been variously described as ‘buzzing’, ‘piercing squeals’ or ‘grinding metal’. For others, the onset of the affliction manifests as a sudden pulse of pain. This is often followed by distressing symptoms like nausea, dizziness, earaches, fatigue, vertigo, headaches and vision problems.

According to a 2018 study published by experts at the University of Pennsylvania, patients diagnosed with Havana syndrome are severely impaired in their cognitive, motor and sensory abilities. Apart from the suddenness of the symptoms, they are caught unawares by the after-effects that persist for quite some time. In fact, many people have reported long-term issues like headaches, insomnia, and hearing problems, which effectively hinders their performance of regular duties.

This has significantly impacted the U.S.’ overseas operations, prompting the current administration to treat it as a ‘national security’ issue. Although officials are scrambling to ascertain the source of the disease, it remains as elusive as ever. There are some, however, who favour the age-old theory that it is induced by high-intensity microwaves, weaponised by geopolitical opponents.

Such lingering suspicion is a legacy of the Cold War era, where super-power rivalry had provoked scientific research into areas like mind control. It is worth remembering that the U.S. Defence Intelligence Agency had published a report in 1976, which flagged the possibility of the Soviet Union disrupting intelligence operations through the use of microwaves.

This intrigue has now carried over to the post-Cold War period, with American analysts suspecting a Russian hand in the recent Havana syndrome. Even the role of China has been scrutinised in certain sections of the media, owing to its alleged forays in microwave research. As can be recalled, in November 2020, the Asian power had been accused of using microwave weapons against Indian troops in a disputed border region. Although the report was later dismissed as ‘fake news’ by the Indian government, the recent events in Bogota have brought this issue to the limelight again.

Adding to these speculations is a report by the National Academies of Sciences, Engineering and Medicine, published in December 2020, which attributes the symptoms of the Havana syndrome to a ‘directed, pulsed radiofrequency (RF) energy device’. In any case, the U.S. has officially desisted from pointing fingers at any country. However, the issue has received top priority, with the Biden administration stepping up its efforts to investigate the matter. The Senate has also passed a ‘Havana Act’ with bipartisan support, which seeks to enhance financial and medical resources for American officials suffering from the syndrome.

Despite five years of experimentation and examination of victims, the U.S. has no definitive proof about the deployment of a microwave weapon. Repudiating this theory, many medical experts have suggested the alternate possibility of a mass psychogenic condition, more popularly known as mass hysteria. This is a condition where people in a group feel sick because they think they have been exposed to something dangerous, even though there is no physical or environmental reason to support the same. As a result, it is argued that the Havana Syndrome should be approached as a ‘mental health issue’, as opposed to being treated as an ‘energy weapon’ with political and security implications.