Mozambique’s government is scrambling to contain the fallout from a U.S. investigation into the country’s $2 billion hidden-debt scandal, ordering a series of high-profile arrests in early February 2019.

Mozambique is a country located in Southeast Africa bordered by the Indian Ocean to the east, Tanzania to the north, Malawi and Zambia to the northwest, Zimbabwe to the west, and Eswatini (Swaziland) and South Africa to the southwest.

Mozambique is endowed with rich and extensive natural resources. The country's economy is based largely on agriculture, but the industry is growing, mainly food and beverages, chemical manufacturing and aluminium and petroleum production. The tourism sector is also expanding. South Africa is Mozambique's main trading partner and source of foreign direct investment, while Belgium, Brazil, Portugal and Spain are also among the country's most important economic partners.

Since 2001, Mozambique's annual average GDP growth has been among the world's highest. However, the country is still one of the poorest and most underdeveloped countries in the world, ranking low in GDP per capita, human development, measures of inequality and average life expectancy. Mozambique’s government debt stood at 102% of its GDP, which is considered to be “manageable” by the IMF. 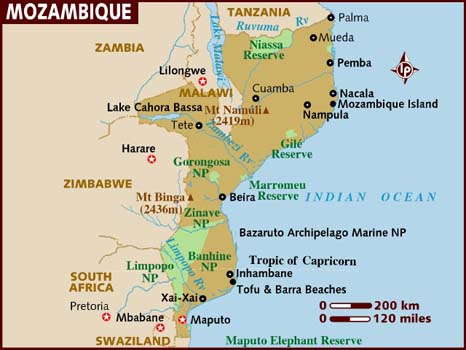 The detentions signal concern among Mozambican authorities that the U.S. probe may reveal more corruption by ruling Frelimo party officials as they prepare to compete in general elections in October. Those arraigned so far include the ex-head of intelligence and a son of former president and high-ranking Frelimo official Armando Guebuza.

Since Feb. 14 2019, Mozambique authorities have detained at least six people in connection with the case. Making the arrests will enable President Filipe Nyusi to tell the electorate that those suspected of corruption have been apprehended, said Domingos do Rosario, a political science professor at Eduardo Mondlane University in the capital, Maputo. They may also be an attempt to appease foreign donors that the state is acting to stamp out graft, he said.

“The main idea is to clean the image of the party, not only because of the general elections but also before the Americans and donors,” Do Rosario said. The strategy could backfire if it causes major fissures in Frelimo, he said. The party didn’t respond to an email seeking comment.

The detentions follow the arraignment of former Mozambican Finance Minister Manuel Chang, by South African authorities, in December on a U.S. indictment. Chang is accused of taking at least $5 million in bribes and conspiring to commit securities fraud in connection with the hidden-debt scandal.

None of those arrested has been found guilty of wrongdoing. Guebuza senior hasn’t been formally accused of wrongdoing. Arguments in the Johannesburg case for the extradition of Chang, who last week lost his bid to be granted bail, are scheduled for Feb. 26. Mozambique has since also formally requested Chang’s extradition, said Max Mpuzana, a spokesman at South Africa’s department of justice. The request to have Chang sent home may be an attempt to limit further political damage.

How the extradition applications are dealt with could depend on whether Mozambique is deemed to be a so-called “associated African state,” according to Anton Katz, a Cape Town-based advocate who specializes in extradition law. For requests from associated states, the magistrate decides on whether or not to grant extradition, Katz said. For an unassociated state, such as the U.S., the magistrate decides whether the accused person is extraditable, and the justice minister makes a final decision on the request, he said.

The timing of the competing requests does not matter under the law, and it’s up to the prosecutor which to pursue more vigorously. “The one with the less risk of not succeeding is the one I’d pursue,” Katz said. The recent arrests in Mozambique “should have absolutely no bearing whatsoever” on the nation’s bid to have Chang sent home, he said.

Our assessment is that an explosion in Mozambique’s debt levels will greatly impact one of Africa’s most promising economies. We believe that a political scandal of this size will result in a major reform, which will ultimately be beneficial for the country in the long run.