Indian Prime Minister Narendra Modi and Chinese President Xi Jinping are scheduled to meet at the end of April, for informal one-on-one talks. Officials have reportedly..

Indian Prime Minister Narendra Modi and Chinese President Xi Jinping are scheduled to meet at the end of April, for informal one-on-one talks. Officials have reportedly stated that the two leaders will discuss “specific differences and sensitive issues.” It is believed that Modi and Xi Jinping will discuss bilateral as well as global issues, including trade and border disputes. Both India and China may be concerned by shifting geopolitics in Asia.

India and China have a long history of cultural exchange and trade. There are records of Chinese travellers in India through the medieval ages. While India was under British rule for over a century, China was also adversely affected by British Imperialism, particularly in trade. The British played a huge role in the spread of opium and the resulting instability in China. China went to war against Britain in two Opium Wars in the mid-19th Century. The British Empire colonised the island of Hong Kong in 1842.

India’s contemporary relationship with China began in 1950. Between 1960 and 1987, India and China were involved in three major military conflicts: the Sino-Indian war of 1962 centred in Aksai Chin, the Chola incident in 1967 over Sikkim, and the 1987 military skirmish in Sumdorong Chu Valley in Arunachal Pradesh. The tension between the two nations began to thaw with Rajiv Gandhi’s historic visit to China in 1988. This was the first visit by an Indian Prime Minister in 34 years.

A bilateral relationship has since been established, however, the two countries have never completely resolved their border problems and there is general sense of mistrust. India and China still have multiple border disputes. The two countries are geopolitical rivals as both vie for influence in South Asia. China has improved ties with several of India’s neighbours, including Nepal, Bangladesh, Sri Lanka, and the Maldives. China is also a long-term ally to India’s rival, Pakistan. Beijing has opposed India’s membership of the Nuclear Suppliers Group.

India has refused to participate in China’s Belt and Road project, since part of the Pakistan-China belt runs through disputed territory in Kashmir. India has taken an adversarial stance on issues such as Tibet and the South China Sea dispute. In 2017, tensions between the neighbouring countries escalated again, when a skirmish broke out between Indian and Chinese troops at the Doklam Plateau. The area is a disputed territory between Bhutan (an Indian ally) and China. The stand-off was called off almost three months later in August, through diplomatic channels. Read more on the stand-off here.

In recent months, the Indian government has made strides towards improving relations with China. Prime Minister Modi personally called Chinese President Xi Jinping to congratulate him on his re-election earlier this year. The two heads of state reportedly agreed to improve relations during this phone call, and to consult each other on regional and international issues. In March, India cancelled a Tibetan rally marking 60 years of exile in India. The event included an interfaith prayer led by the Dalai Lama. Shortly after, China removed its objection to placing Pakistan on a grey list for terror financing. Some observed that this may have been a quid pro quo gesture. 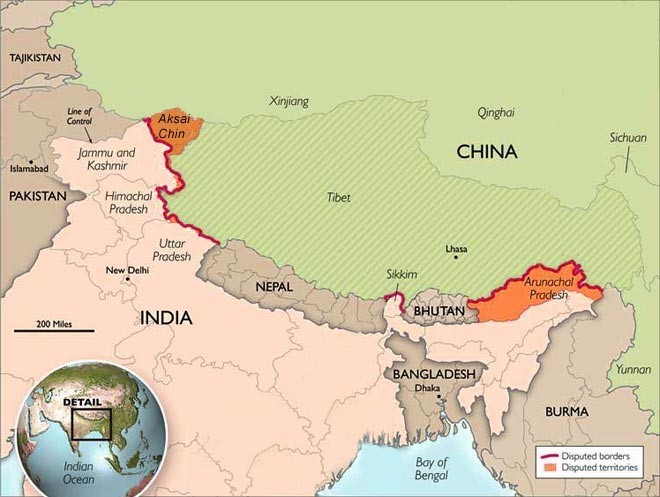 At a ministerial meeting of the Shanghai Cooperation Organisation, it was announced that the Indian and Chinese heads of state will meet on 27th April. Prime Minister Modi and President Xi Jinping were already scheduled to meet at a summit in June, making this visit all the more unusual. Since the visit was announced, there has been immense speculation on the purpose of this one-on-one, informal meeting. The two countries have agreed not to release any official joint statements at the meeting, according to Chinese officials.

Indian External Affairs Minister Sushma Swaraj said that the summit will allow the leaders to “exchange views on bilateral and international matters… with the objective of enhancing mutual communication.” Her Chinese counterpart Wang Yi said that the meeting would involve “communications of a strategic nature concerning big changes happening in the world.”

Analysts have pointed out that China is currently facing challenges on multiple fonts. China is engaged in a potential trade war with the United States. American protectionism is on the rise and Washington has imposed tariffs targeting multiple Chinese industries. US is headed towards a summit with North Korean President Kim Jong-Un. Beijing may be suspicious of a nuclear deal between the US and North Korea that excludes China. Furthermore, the US has considered renegotiating other trade ties such the Trans-Pacific Partnership, of which China is not a member. Concurrently, China’s keystone OBOR has faced potential setbacks as 27 out of 28 EU ambassadors to China signed a report criticizing China’s Belt and Road Initiative.

Some commentators have speculated that China is working to prevent another Asian power from strengthening its ties to the US. “Whenever China feels that US-India relations are improving, China does some kind of signalling, and calls for ‘multipolarity’ to counter the United States’ ‘unipolar’ position,” said Srikanth Kondapalli, professor at Jawaharlal Nehru University. Last year, India joined the Quadrilateral Security Dialogue, with the US, Japan and Australia.

Additionally, it has been noted that improved Sino-Indian ties, particularly any progress on the border issue, will benefit Prime Minister Modi ahead of next year’s general elections. “Modi has recognised that an adversarial relationship with China brings few benefits and mostly problems that India will find difficult to solve with its own resources,” said Zorawar Daulet Singh, from the Centre for Policy Research. India may be also uncertain of its own relationship with US, in light of unfriendly policies such as the sweeping steel tariffs introduced earlier this year.

Critics have maintained that the relationship between India and China is still mired with strategic distrust and suspicion. In April this year, China reiterated its policy on Arunachal Pradesh. “China’s position on the Sino-Indian boundary issue is consistent and clear. The Chinese government has never acknowledged the so-called Arunachal Pradesh,” Foreign Affairs spokesperson Geng Shuang said.

Chinese ambition in the Indian subcontinent is also not favourable for Indian security interests. “The Chinese have a finer understanding of the structural realities of international politics and realize that India as an equal partner in Asia is not conducive to their own ambitions,” wrote China Analyst Jabin Jacob. He added that India’s trade deficit with China remains significant and is “unlikely to go away soon.”

At the ministerial meeting of the SCO earlier this week, India maintained its stance on BRI, and declined to endorse China’s keystone project. Ahead of the high level meeting between Modi and Xi Jinping, Beijing was also quick to reassure its ally Pakistan that their relations would “never rust.”

Our assessment is that both India and China are increasingly uncertain of their relations with Washington. A more stable economic and diplomatic relationship would benefit both nations. As the two countries navigate changing geopolitics in the world today, it would be important for New Delhi and Beijing to ensure that crises such as Doklam do not emerge again. However, India and China also disagree on numerous issues, and neither nation is likely to compromise on matters such as the Line of Actual Control. Could the upcoming summit in Wuhan be a fresh start for Indo-China relations?