Miller is the highest-level aide still working at the White House known to have talked to investigators.

Robert Mueller is an American lawyer and civil servant who was the sixth Director of the Federal Bureau of Investigation from 2001 to 2013. After J Edgar Hoover, he is the longest serving chief of the FBI. He was appointed by President George W. Bush and his original ten-year term was given a two-year extension by President Barack Obama. He is currently head of the Special Counsel investigation of Russian interference in the 2016 United States elections.

In March 2017, then FBI director, James Comey said that the agency was investigating possible links between Russian government and Trump campaign aides. He was dismissed from his position by US President Donald Trump shortly thereafter. The US Department of Justice (DoJ) has appointed former head of the FBI, Robert Mueller, to investigate this matter. Additional information was leaked that Trump himself was under investigation for “obstruction of justice” having fired Comey on May 2017.

Stephen Miller is a senior advisor for policy for the current White House. Prior to joining the White House, he was the communications director for then-Alabama senator, Attorney General Jeff Sessions. He has also served as a press secretary to Republican U.S. Representatives Michele Bachmann and John Shadegg. Miller is a polarizing figure in American politics. He has acted as Trump’s chief speechwriter and is credited authoring the President’s inaugural address – speech that was criticized for being too dark. He has also been credited for being the chief architect of Trump's executive order restricting immigration from several Middle Eastern countries. Miller rose to national prominence on February 12, 2017, when, during a morning of television appearances defending the travel ban, he appeared to question the power of the judiciary to limit the executive's role in setting immigration policy. 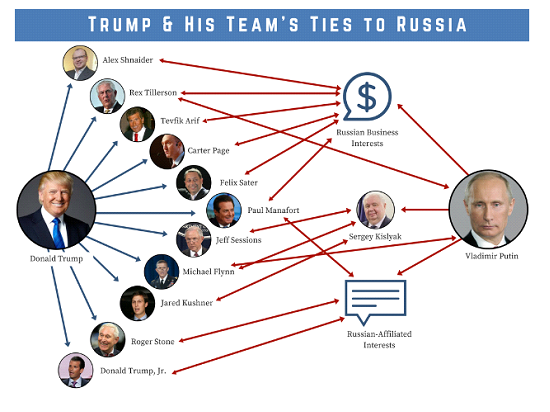 Former Chairmen of the Trump presidential campaign, Paul Manafort and his former business associate Rick Gates have surrendered to Federal authorities. They have been indicted on 12 counts, including conspiracy against the United States, conspiracy to launder money, false statements. They have posted bonds presently for their release and have pleaded not guilty. For a detailed overview on their charges. In addition, George Papadopoulos became the first person to plead guilty in Special Counsel Robert Mueller's investigation of Donald Trump's Presidential Campaign. He confessed to lying to the FBI about his contacts with Russia.

In November 2017, it was reported that White House senior policy adviser Stephen Miller had been interviewed as part of special counsel Robert Mueller's Russia probe. Miller is the highest-level aide still working at the White House known to have talked to investigators. He is also an early member of Trump's campaign staff.

At the heart of Miller’s questioning may be connected to the firing of former FBI chief, James Comey. It has been reported that Miller had helped Trump draft a memo which explained why Comey was being let go. The New York Times has stated that at the time White House counsel Don McGahn overruled the memo because the content was problematic. The White House counsel had reportedly feared that the memo would have caused Trump problems, legally. However, the memo didn’t disappear. In September 2017, the Justice Department had turned over a copy of this memo to Mueller. The version of the memo that became public, criticized Comey over his handling of the investigation over Hillary Clinton’s private email server. In addition to Miller, Mueller is also seeking to interview other top White House aides. This includes counsel McGahn, Josh Raffel, who is Jared Kushner’s communications’ aide and communications director Hope Hicks.

Our assessment is that contents of the controversial memo that was scrapped could likely bring trouble for Stephen Miller and US President Donald Trump. If the content implicates them, then Trump could be charged with obstruction of justice for firing Comey. The Russian probe by Mueller is threatening to derail Trump’s Presidency.