The Markets in Financial Instruments Directive II - MiFIDII officially came into force on January 3rd, 2018. Thus, any firm that engages and conducts business within the European Union especially dealing in shares, bonds, commodities and derivatives must now adhere to these rules. These firms will also be expected to provide highly detailed information regarding their transactions in Euros.

Will these rules prevent another financial crisis?

Post the September 11, 2001 attacks, the US Federal Reserve stimulated the struggling U.S. economy by cutting interest rates to historically low levels. This resulted in a boom in the real estate market. Lenders began to extend mortgages to millions who couldn’t qualify for traditional bank loans. Housing prices therefore peaked in early 2006 and began to decline in 2006 and 2007. Many of the subprime mortgages were affordable in the beginning but rates spiked in 2007. In the meltdown that occurred in the wake of this crisis, several banks in Wall Street had to declare bankruptcies and a global recession followed. The financial crisis that occurred between 2007 and 2008 is often referred to as the Great Depression.

MiFID II is a revamped version of the Markets in Financial Instruments Directive. It is an ambitious set of regulatory reforms that was introduced by the European Union. Its primary goal is to ensure increased protection for investors. It is also meant to create a system that encourages greater transparency in varied asset classes starting from exchange traded funds to foreign exchange.  The European Union worked on the legislation for close to seven years and it consists of 1.7 million paragraphs consisting of just rules. The original MiFID was in force since 2008. One of the issues in the original drafts was that the regulatory approach to third country firms was left up to each member state, and that led to some firms outside the EU having a competitive advantage. This issue has been addressed through MiFID 2, which promises to harmonize the rules for all firms with EU clients. 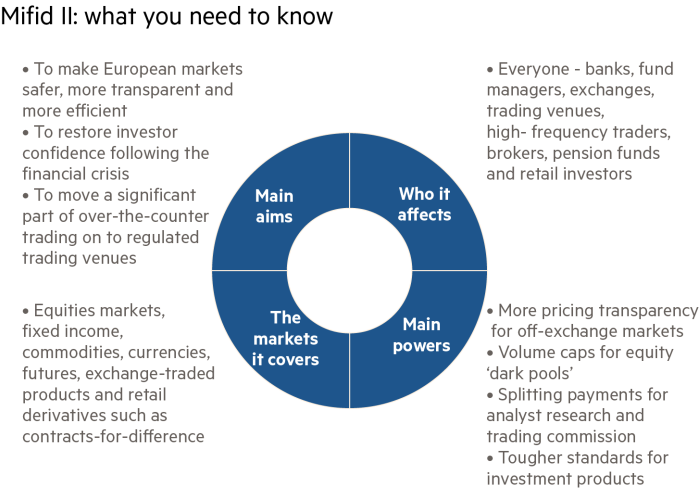 The Markets in Financial Instruments Directive II - Mifid II officially came into force on January 3rd, 2018. Thus, any firm that engages and conducts business within the European Union dealing in shares, bonds, commodities and derivatives must now adhere to these rules. These firms will also be expected to provide highly detailed information regarding their transactions in Euros.

"Will there be people who sit back and watch and see how markets develop? Absolutely, there will be. But it is important to recognize the longer-term change that this represents for the industry," Rebecca Healey, head of EMEA market structure and strategy at Liquidnet, told CNBC. In November, Erste Bank CEO Andreas Treichl said the introduction of Mifid II was "incredibly patronizing" and akin to treating both banks and clients "like little kids who don't know what they're doing."

These new rules will force fund managers to pay brokers and banks separately for research and trading services. However, the roll out of the new rules occurred without any major upset. Nicholas Russell, chief financial officer of financial services group Canaccord Genuity in London, said his firm did not experience any glitches internally or with clients. “It’s a light relief for those of us who have given up the past 12 months of our life working on this,” he said.

George Godber, fund manager at Polar Capital, however spoke about the additional work that will be piled on those working within the industry and the vast changes these rules will bring about. He noted, “We have to rate every single transaction through software that we have with every provider of research. If I have a 90-second phone call, I have to rank (log) that almost as a lawyer does and pay for it.”

Our assessment is that these large-scale reforms that have been introduced by the European Union will affect not only big conglomerates but also anyone who pays into or draws a pension as traders will now have to justify investment decisions to investors. Barring few hiccups, experts do expect these rules to introduce greater transparency which is crucial in the prevention of another global financial crisis and recession.