The Midterms Impact on American Politics

The United States has just voted in the 6 November Mid Term elections and the Republicans have retained control of the Senate, while the Democrats have gained the house of representatives. Their victory could bode well for both parties and could play a pivotal role in changing the current toxic..

The United States has just voted in the 6 November Mid Term elections and the Republicans have retained control of the Senate, while the Democrats have gained the house of representatives.

Their victory could bode well for both parties and could play a pivotal role in changing the current toxic political landscape.

The House of Representatives is vital for forming and passing bills through the US Government. Bills are introduced and then voted on in the chamber and are later passed to the Senate for official assent before they reach the President. A majority of votes in the House are required for them to be passed.

On November 6, 2018, Americans voted in the midterm elections. The Republicans continue to hold the Senate, while Democrats are on track to take the house. 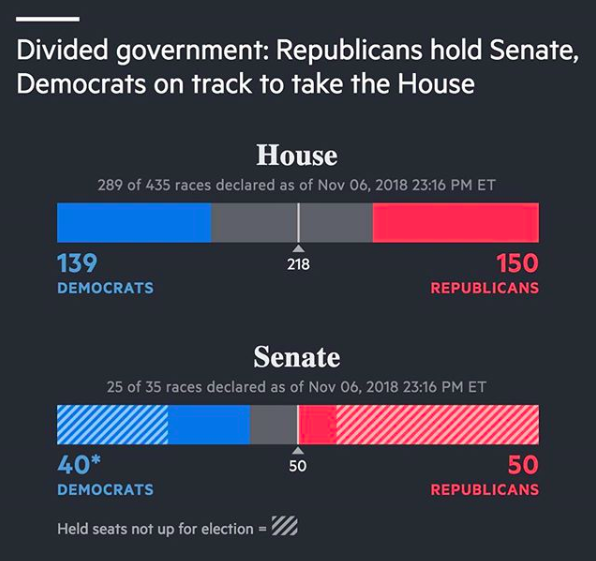 On the eve of the United States midterm elections, the country is more polarised than it has been in years. Recently, a supporter of President Trump has sent bombs to 14 of his opponents; a white supremacist murdered 11 worshippers at the Tree of Life Synagogue in Philadelphia in the worst attack on Jews in Americas’ history.

In the years since the last mid-terms, toxic politics has marred the landscape of American political discourse. It has turned into a weakness that impedes action on pressing issues such as immigration, welfare, healthcare and foreign policy.

U.S President Donald Trump did not begin this trend, but he has taken advantage of it and made it his own. The Washington Post reported that in the two years since he took office Mr. Trump has lied over 5,000 times; he has done so very effectively, as many of his supporters take his word above all others, especially the media. This suits the president but is dangerous for America: democracy cannot function where reasoned debate loses its power to win arguments. It is also harmful to the foundation of healthy politics, by making compromise difficult within and between parties.

The American democracy is strong, but has fallen prey to polarisation. The media is prone to partisan scepticism, and the supreme court is increasingly perceived to be partisan as well. This has not been an overnight development, and restoring a healthy spirit of debate and compromise will be a long process. The results of the midterm elections could go a long way in beginning that process.

The house of representatives switching into democrat control could be a good starting point, as it would subject Mr. Trump to congressional oversight. The house of representatives has so far refused to investigate the president's tax returns. When intelligence services reported Russian intervention in the presidential election, the house subpoenaed the officials overseeing the investigation to make their work harder. A continuation of this could imperil the rule of law in the long run.

The divisions in the government do not always lead to an impasse; the President and congressional Democrats have proved they can agree on certain important issues, such as reinforcing infrastructure, addressing the confrontation with China and fighting America’s opioid epidemic. This demonstrates a capacity for setting aside their mutual contempt in the pursuit of policies that are in everyone’s best interests.

Our assessment is that the Democrats winning control of the house of representatives would be beneficial to both parties in the long run. Losing the house would encourage some Republicans to work on a new conservative alternative to the president’s politics, while the status quo would reinforce Mr. Trump’s takeover of the party.

Meanwhile, the Democrats, who are in the midst of an argument between the centre and radical wings of the party, risk being sent careening leftward in the event of another loss. A house takeover would benefit the Democrats by emboldening the party’s moderates.