Mosquito larvae have been observed ingesting microplastics that can be passed up the food chain, researchers at the University of Reading claim in a new study. Microplastics are small pieces of plastic that pollute the environment. While there is some contention over their size..

Mosquito larvae have been observed ingesting microplastics that can be passed up the food chain, researchers at the University of Reading claim in a new study.

Microplastics are small pieces of plastic that pollute the environment. While there is some contention over their size, the U.S. National Oceanic and Atmospheric Administration (NOAA) classifies microplastics as less than 5mm in diameter. They come from a variety of sources, including cosmetics, clothing, and industrial processes.

Two classifications of microplastics currently exist: primary microplastics are manufactured and are a direct result of human material and product use, and secondary microplastics are derived from the breakdown of larger plastic debris like the macroscopic parts that make up the bulk of the Great Pacific Garbage Patch. Both types are recognized to persist in the environment at high levels, particularly in aquatic and marine ecosystems. However, as plastics do not break down for many years, they can be ingested and incorporated into, and accumulated in, the bodies and tissues of many organisms. 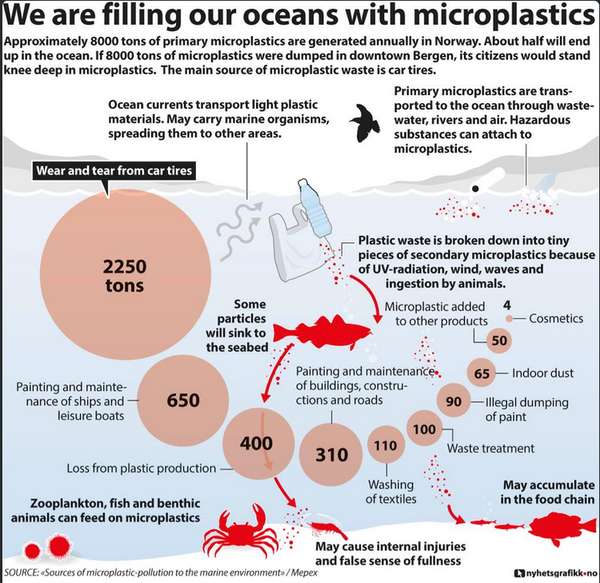 Hard to spot and harder to collect, microplastics can seriously harm marine wildlife and are believed to pose a significant risk to human health as they move through the food chain and contaminate water supplies. Researchers at the University of Reading believe they have proof for the first time that microplastics can enter our ecosystem by air via mosquitoes and other flying insects.

The team observed mosquito larvae ingesting microscopic plastic beads — similar to the tiny plastic balls found in everyday cosmetic products — before monitoring them through their life cycle. They found that many of the particles were transferred into the mosquitoes’ adult form, meaning whatever creatures then ate the flying insects in the wild would also ingest the plastic.

“The significance is that this is quite possibly widespread,” Amanda Callaghan, a biological scientist at Reading and the lead study author said. “We were just looking at mosquitoes as an example but there are lots of insects that live in water and have the same life-cycle with larvae that eat things in water and then emerge as adults.

The animals known to eat such insects include several species of birds, bats and spiders, all of which are hunted in turn by other animals. “It’s basically another pathway for pollution that hadn’t been considered previously,” Callaghan said. Although the team observed the mosquitoes in lab conditions, she said it was “highly possible” the process was already happening in the wild.

Several countries including Britain have banned products containing microbeads, but Callaghan said the scale of the problem was still being discovered. “It’s a major problem and those plastics already in the environment are going to be with us for a very, very long time,” she said.

Our assessment is that we require stricter regulation against single-use and non-biodegradable plastic. The world’s oceans have enough floating plastic to cover an area as large as France. We believe that the recent steps to halt the sale of single-use plastic is a step in the right direction for the world. However, we also feel that the study hints at an imminent threat to our food supply and therefore we require a more comprehensive approach to food security.

India’s rising middle class will consume more resources in the coming future. One way of mitigating the generation of such large volumes of plastics is to curb its use as much as possible. Coupled with the government’s clean India drive and focus on Solar energy, the central government can frame a uniform, sustainability-oriented energy and waste management policy which will reduce the use of plastics.