As the frequency of victims to the Mexican war on drugs increases, Mr.Obrador, the incoming president will focus on the social roots of the crime. Mexico is the second largest economy in Latin America and is a major oil producer and exporter. However, there is a deep socio-economic..

As the frequency of victims to the Mexican war on drugs increases, Mr Obrador, the incoming president will focus on the social roots of the crime.

Mexico is the second largest economy in Latin America and is a major oil producer and exporter. However, there is a deep socio-economic divide between the affluent and the poor. Much of the rural area in the country is underdeveloped and the cities are home to large slums. This inequality has played a role in the rise of crime and drug trafficking in the region.

The drug trafficking business from Mexico to the US is worth an estimated $13 billion a year. The northern border especially experiences high levels of violence. Apart from violence between drug cartels, the country has one of the highest rates of kidnapping in the world.

On 10 December 2006, Felipe Calderón launched Mexico’s war on drugs by sending 6,500 troops into his home state of Michoacán, where rival cartels were engaged in tit-for-tat massacres over territory. The surge in violence had started in 2005, and a string of police and military operations by his predecessor Vicente Fox had failed to stem the bloodshed.

2017 was one of the most violent years in the history of the country. In the month of May, there were 2,186 homicides. Figures show that a person was murdered every 20 minutes in May. Much of the violence is because of the ongoing drug war between the various gangs. According to a report by the International Institute for Strategic Studies (IISS), Mexico is the second deadliest conflict area in the world after Syria.  In 2016, 23,000 people died and the numbers are likely to be more this year. The death toll has surpassed countries like Afghanistan and Somalia. 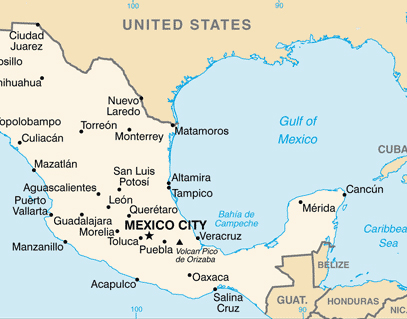 Tecomán, a Mexican city, which was once a tranquil coastal community has witnessed the most futile and ferocious implications of the war on drugs. Last year its murder rate of a reported 172.51 deaths per 100,000 inhabitants resembled that of a war zone. The inhabitants of Tecomán receive bodies with nauseating frequencies, making it Mexico’s most murderous municipality.

“Sometimes we don’t even know who they are,” admitted Arturo Bautista, administrator of Tecomán’s cemetery and the final custodian of the victims of this town’s relentless killing machine. Elías Lozano, Tecomán’s mayor-elect, said he was determined to revive an agricultural town once famed for its limes. “People are crying out for security,” he said. “Tecomenses are decent people and we deserve to live differently.”

After an estimated 200,000 deaths, Mexico’s incoming president has pledged to overhaul that “failed strategy.” “You cannot fight violence with violence,” Andrés Manuel López Obrador vowed this week in Ciudad Juárez, one of Mexico’s most notoriously violent cities.López Obrador, or Amlo as most call him, only takes power in December and the precise details of his approach to public security remain unclear. But early indications suggest he will rely far less on militarised repression and focus more on the social roots of crime.

Mr Obrador’s proposed pacification roadmap includes holding nationwide “listening forums”, where victims of violence, academicians and religious leaders will be consulted on security policy. He is considering the decriminalisation of marijuana and a limited amnesty for non-violent crimes.  He will also create truth commissions to investigate the worst episodes of violence.

Benjamin Lessing, the author of Making Peace in Drug Wars, said he was encouraged by Amlo’s willingness to consider taboo policies such as decriminalisation and amnesty, even if the latter word was needlessly inflammatory. One of the biggest problems with debating drug policy was that too many options were rejected because of prejudice, he said, “Instead we get caught up in a kind of hysteria – that we have to fight to the death and that all the traffickers have to be eliminated.”

Experts blame Mexico’s militarized assault on the drug cartels, launched in 2006, for fragmenting them into smaller, warring factions. As this sparked a turf war that has turned Tecomán and neighbouring municipalities along its strategic west coast into some of the country’s deadliest.

Our assessment is that the incoming President’s strategy of focussing on the social roots of the crime will be an effective scheme to combat drug violence in Mexico. We feel that the city of Tecomán has fallen prey to such carnage due to corrupt politicians who placed their economic benefits above upholding the city’s law. We believe that Mr Obrador should adopt a violence minimisation strategy designed to cut down  Mexico’s homicide rate by targeting cartels that are the perpetrators of violence.