German Chancellor Angela Merkel’s fourth term may be in doubt as exploratory talks to form Germany’s next coalition government collapsed when Free Democratic Party (FDP) walked out of marathon negotiations.

In 2005, she had become the first female Chancellor of Germany. By 2013, during the general election, Merkel was seen as a reliable leader in Germany. Her party won the election with 41.5% of the vote. It was a landslide victory. She is the longest-serving incumbent head of government in the European Union.

Martin Schulz, the leader of the center-left Social Democratic Party (SPD), was seen by some as a notable opponent for Merkel.

Founded in 2013, the euroskeptic Alternative for Germany party led by Alice Weidel and former CDU politician Alexander Gauland has sparked concern and controversy in Germany. The party is a populist right-wing platform that is anti-immigrant and has been accused of peddling Islamaphobia. It also has opposed gay marriage and is a climate change denier.

Merkel’s conservative CDU/CSU bloc was able to retain its majority during the federal elections held in September 2017. However, it witnessed its worst results in almost 70 years. It won 33% of the votes. This is a sharp decline from the 2013 elections when it won 41% of the votes. Voter turnout however had increased to 76%.  Merkel said that she had hoped for a “better result” adding, “Today we can say that we now have a mandate to assume responsibility and we're going to assume this responsibility calmly, talking with our partners of course.” 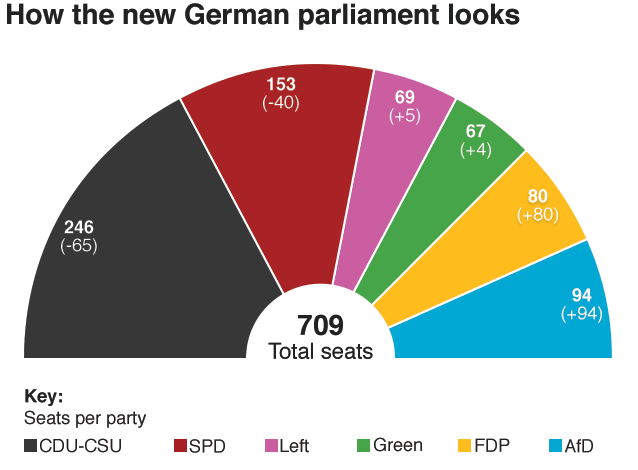 German Chancellor Angela Merkel’s fourth term may be in doubt as exploratory talks to form Germany’s next coalition government collapsed when Free Democratic Party (FDP) walked out of marathon negotiations.

The free-market liberal FDP pulled out after four weeks of talks with Mrs Merkel's CDU/CSU bloc and the Greens. “The four discussion partners have no common vision for modernisation of the country or common basis of trust,” the FDP leader, Christian Lindner, announced after the four parties involved missed several self-prescribed deadlines to resolve differences on migration and energy policy. “It is better not to govern than to govern badly.”

Merkel acknowledged that the talks had failed and said that she would stay on as acting Chancellor. She also said that she would consult with President Frank-Walter Steinmeier on how to move forward, adding that a deal had been within reach. "It is a day of deep reflection on how to go forward in Germany. As chancellor, I will do everything to ensure that this country is well managed in the difficult weeks to come.” Co-leader Simone Peter of the Greens, meanwhile, said the FDP had been "irresponsible, dubious and calculating".

The possibility of calling for fresh elections is unlikely. Mainstream parties are concerned that populist right-wing party, Alternative for Germany might gain more clout and more votes in a future election. In the general election held in 2017, AfD as the party is called, received 14% of the vote and will be participating in the German parliament. This is the best result a far-right party has witnessed in Germany since the end of World War II.

Our assessment is that this is clearly the biggest political crisis that Angela Merkel has faced in the past 12 years in her role as the nation’s Chancellor. She has often been seen as the beacon of stability in Europe. This coalition was Merkel’s only shot at forming a government and with it being gone, her future as the Chancellor is also uncertain. This crisis might also influence European politics – Merkel had not attended did not attend a summit of EU leaders in Sweden that was held recently due to the domestic problems.