German Chancellor Angela Merkel has noted that she is optimistic about forming a successful coalition government with Social Democratic Party (SDP). It has been three..

German Chancellor Angela Merkel has noted that she is optimistic about forming a successful coalition government with Social Democratic Party (SDP).

It has been three months since the German general elections. Recently, exploratory talks for creating a coalition between Merkel’s political party and Free Democratic Party (FDP) collapsed plunging Germany into a political crisis.

In 2005, she had become the first female Chancellor of Germany. By 2013, during the general election, Merkel was seen as a reliable leader in Germany. Her party won the election with 41.5% of the vote. It was a landslide victory. She is a strong proponent of transatlantic economic relations and seen as flagbearer for free trade. She is the longest-serving incumbent head of government in the European Union.

She has faced heavy criticism she has faced domestically regarding the issue of refugees, she has remained steadfast with implementing her agenda. In 2015, she came under fire for opening Germany to asylum seekers. At the time, she told the Germans that “we will manage” and did not change course.

In September 2017, Merkel’s conservative CDU/CSU bloc was able to retain its majority during the federal elections. However, it witnessed its worst results in almost 70 years. It won 33% of the votes. This is a sharp decline from the 2013 elections when it won 41% of the votes. Voter turnout however had increased to 76%.  Merkel said that she had hoped for a “better result” adding, “Today we can say that we now have a mandate to assume responsibility and we're going to assume this responsibility calmly, talking with our partners of course.” This also meant that she couldn’t form a government without forming a coalition.

The center-left Social Democratic Party (SDP) came in second during the elections. However, it posted its worst result since 1949. 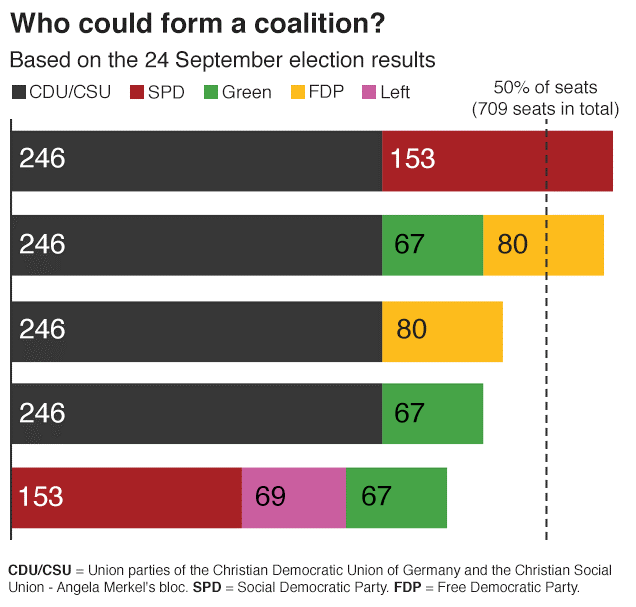 The German political landscape was plunged into crisis when exploratory talks to form a coalition government between Merkel’s CDU and the Free Democratic Party (FDP) and Green Party collapsed. After marathon negotiations, the free-market liberal FDP pulled out. “The four discussion partners have no common vision for modernization of the country or common basis of trust,” the FDP leader, Christian Lindner, announced after the four parties involved missed several self-prescribed deadlines to resolve differences on migration and energy policy. “It is better not to govern than to govern badly.”

For a while it seemed that any hope for forming a government was diminishing. However, major parties were also wary of a new set of elections. There were fears that populist right-wing party, Alternative for Germany, which did surprisingly well in the 2017 elections, might gain more clout and more votes.

Despite talks collapsing with FDP, it emerged that Merkel was hopeful to forming a new coalition, this time with the Social Democratic Party (SDP). Speaking to reporters in January 2018, she said that all parties were optimistic about reaching an agreement. She noted, “I think we can do it. We will work very quickly, very intensively. I'm going into these talks with optimism, indeed it's clear that in these few days we have a huge amount of work ahead of us, but we're willing to take on this work and achieve a good outcome."

Speaking after the end of the meeting on Sunday, Lars Klingbeil, SPD general secretary, said: “We are all aware of the joint responsibility that we have, for the future of Germany, of Europe.”

Our assessment is that German political landscape has always looked upon as the beacon of stability by the rest of Europe. Nations such as France and other allies within the European Union will want to have this crisis resolved. However, talks could still break down between the two parties. SDP, which lost a lot of its support in 2017, would perhaps be wary of joining a major political coalition again in fear of backlash from voters. Immigration, taxation, healthcare and the role of Germany in Europe will be important points that will be discussed by the two political parties.