During a press briefing US Secretary of State, James Mattis reiterated his belief that, despite the claims being made by the North Korean leadership, their ability to..

During a press briefing US Secretary of State, James Mattis reiterated his belief that, despite the claims being made by the North Korean leadership, their ability to launch successful nuclear strikes against anywhere in the continental United States is still far from becoming a reality.

North Korea has been on a long road to achieving its goal of developing its own nuclear weapons program ever since it withdrew from the Nuclear non-proliferation treaty (NPT) in 2003 while under the leadership of Kim Jong Il. However, since 2013 the North Korean government has pursued its nuclear program more aggressively than ever before and appears to have made a great deal of progress in a relatively short span of time; from restarting its missile program to having what it claims are long range Inter-Continental Ballistic Missiles (ICBMs) capable of reaching as far as the Eastern seaboard of the United States. To date North Korea has launched 23 missiles of varying design over a span of 16 tests in 2017 alone. 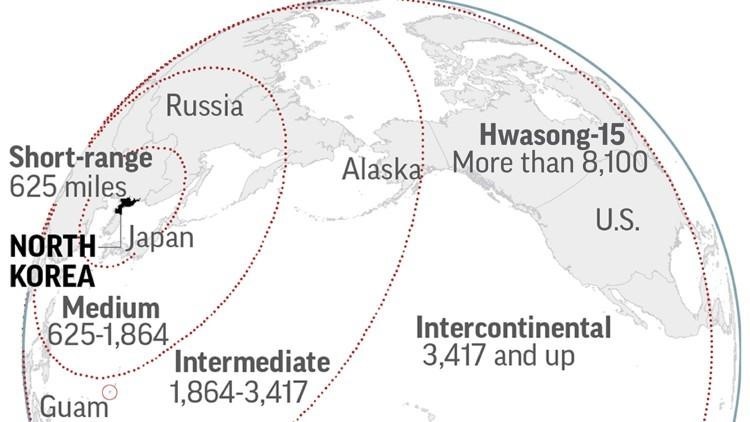 The statement from the Secretary of Defense comes just two weeks after North Korea conducted the first tests of its new Hwasong-15 ICBM which it claimed has a range of over 8100 Miles (13,000 Km). The opinion expressed by Secretary Mattis aligns quite closely to what most experts also believe regarding the North’s true nuclear strike capabilities. Although the progress made by North Korea’s missile program has been undeniably impressive, from the tests that have observed, most argue there is no way to truly confirm if the claims made by Pyongyang are accurate. One reason for this skepticism is that the tests that have taken place are launched straight upwards rather than the long-range, stable flight in a wide parabolic arc that is required of an ICBM. It is also unknown what the weight of the test payload was and whether under real world conditions the Hwasong-15 missiles would be able to successfully deliver a nuclear payload with acceptable accuracy and stability. There are also questions over the survivability of the test missiles as it is currently unknown whether they would be able to tolerate heat and mechanical stress of re-entry while remaining operational.

For its part the North Korean regime has insisted that the Hwasong-15 was tested with a heavy payload and will be fully capable of carrying a nuclear payload to any part of the continental United States.

The latest round of missile tests come at a time when U.S. – North Korean ties are at, or close to, an all time low, with President Donald Trump entering a war of words with the North Korean Leader Kim Jong Un on more than one occasion. Secretary Mattis also took the opportunity to allay growing concerns, especially from key regional allies South Korea and Japan, over the apparent mixed messages coming from the American Government, stating that despite continued provocation from the North, diplomacy remains their primary strategy for resolving the growing crisis in the Korean Peninsula.

Meanwhile, United Nations Security Council is set to impose more sanctions on North Korea. There is a US-drafted resolution that seeks to toughen sanctions on North Korea in response to its latest intercontinental ballistic missile launch. The draft, seen by Reuters on Thursday, seeks to ban nearly 90 percent of refined petroleum product exports to North Korea by capping them at 500,000 barrels a year and demand the repatriation of North Koreans working abroad within 12 months.

Our assessment is that North Korea’s pursuit of a nuclear program is as closely tied to its internal political climate as it is to its foreign policy. For this reason, it is highly likely that despite punitive sanctions and increasing political pressure even from China, which remains its sole ally in the region, the North Korean leadership is unlikely to be deterred from continuing to develop its nuclear program.

However, it is possible that once North Korea has proved the extent of its capabilities to those nations that it perceives to be a threat, they may be willing to provide some degree of compromise. Using the offer to de-escalate hostilities as a bargaining chip in order to secure additional food aid, resources or the lifting of trade sanctions; a strategy that Pyongyang has used in the past, often to good effect.