With the Taliban having assumed the reins of power in Afghanistan, India apprehends a resurgence of cross-border terrorism. Amidst the attempts to re-evaluate its counter-terrorism strategies, the country’s Home Minister Amit Shah has indicated that the National Intelligence Grid (NATGRID) will be launched soon. In a speech delivered at the 51st Foundation Day event of the Bureau of Police Research and Development (BPRD), he has clarified that the “final synchronisation and testing” of the long-pending electronic database is currently underway.

Conceptualised in 2009, NATGRID is an integrated intelligence grid that connects the databases of core security agencies under the Government of India. It was initiated by former Home Minister P. Chidambaram after the devastating terror attacks on Mumbai in November 2008.

As can be recalled, the infamous 26/11 attacks had been attributed to several vulnerabilities in India’s intelligence gathering and action networks. In particular, the country’s security agencies had been criticised for failing to track real-time information about terrorist operatives like David Coleman Headley, who visited India for several reconnaissance missions between 2006 and 2009. In the absence of an integrated database like NATGRID that could reveal the unusual patterns in his travel itinerary, Headley’s trips had not raised any suspicion, allowing him to share vital information about potential Indian targets to Pakistan-based terrorist group Lashkar-e-Taiba.

Against this backdrop, the NATGRID project was launched with an initial budget of ₹2,800 crore. It sought to create a seamless and secure database that prevented terrorist attacks with real-time access to intelligence across different state agencies. Later, the budget was increased to ₹3,400 crore by the Cabinet Committee on Security (CCS) in 2010. 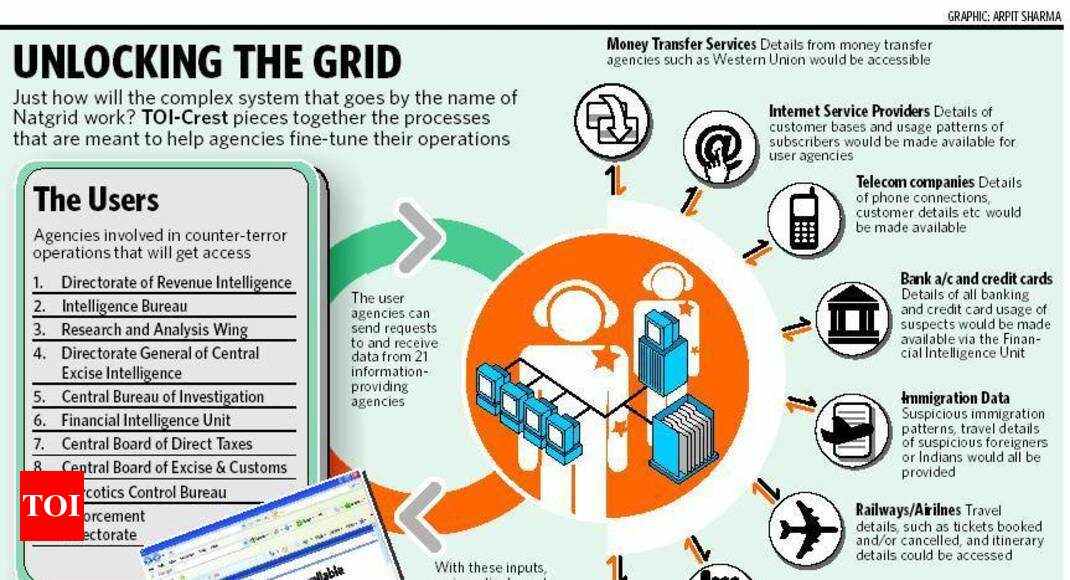 Over the years, the concept of NATGRID ran into several controversies. Privacy concerns dominated this discourse, as the integrated database could potentially function as a surveillance tool in the hands of the government. Moreover, security agencies were engaged in their own turf war, unwilling to exchange information with each other. As a result, the project considerably slowed down by 2012.

Four years later, there was a leadership change in NATGRID, with IB officer Ashok Patnaik being appointed the Chief Executive Officer (CEO). According to reports, this gave a fresh lease of life to the impending project.

Today, the NATGRID is envisioned as an integrated intelligence database that collates vital information such as banking and financial transactions, credit/debit card payments, stolen vehicle records, air and rail travel itineraries, immigration details, property records, driving licenses, telecommunications etc. By virtue of a Memorandum of Understanding (MoU) signed with the National Crime Records Bureau, it will also have access to the Crime and Criminal Tracking Network and Systems (CCTNS) - a database that links crime information, including First Information Reports (FIRs), across 14,000 police stations in India.

As per the ‘first phase’ plan, ten user agencies will be connected with the NATGRID, including the Central Bureau of Investigation, Directorate of Revenue Intelligence, Enforcement Directorate, Central Board of Indirect Taxes and Customs, Central Board of Direct Taxes (for the Income Tax Department), Cabinet Secretariat, the Intelligence Bureau, Directorate General of GST Intelligence, the Narcotics Control Bureau, the Financial Intelligence Unit and the National Investigation Agency. In the later phases, more organisations will be brought on board, eventually integrating around 1,000 departments under the NATGRID.

Already, agencies like the Intelligence Bureau are believed to be testing the NATGRID database. The formal launch is expected soon, with Prime Minister Narendra Modi unveiling the final platform. It is expected that this cutting-edge technology will enable intelligence agencies to coordinate with each other and piece together relevant information with actionable outputs for investigating officers. Moreover, a pattern search and recognition system will potentially help to extract information while weeding out 'cock and bull intelligence' that is deliberately put out by malicious actors to mislead agencies.

Finally, it is believed that NATGRID will ensure a more robust lawful interception process, together with mechanisms like the Central Monitoring System (CMS) and the Network Traffic Analysis (NETRA).

Although recent developments in Afghanistan have underscored the need to strengthen counter-terrorism efforts, platforms like NATGRID need to be tempered with privacy safeguards. They cannot be exempt from public scrutiny merely because they are a part of the defence and intelligence infrastructure. In the absence of adequate oversight, such digital databases can potentially facilitate the illegal collection and analysis of personal data. This is particularly disquieting for India, at a time when the alleged use of Israeli spyware Pegasus to conduct state surveillance has triggered a political storm.

Moreover, the MoU signed with the National Crime Records Bureau has been criticised for infringing the federal principles of the Constitution. This is because the data pertaining to FIRs of a particular police station fall under the ambit of a ‘state subject’.