US markets fell as Paul Manafort, former Chairman of the Trump Presidential campaign, was charged with money laundering and conspiracy. The markets also..

US markets fell as Paul Manafort, former Chairman of the Trump Presidential campaign, was charged with money laundering and conspiracy.

The markets also seem to have reacted to news that the US House of Representatives was planning on gradually decreasing the corporate tax.

Dow is a stock market index. It, along with other stock market indexes, goes through periods of general increase or general decline. A period when there is an increase is referred to as the bull market and when there is decline, it is called a bear market. There are also phases of stagnation. The first period of bull market experienced by Dow was between 1885 and 1890. It reached its peak of 78.38 on June 4, 1890. Almost immediately, the index experienced a bear market and Dow plunged up to 63% in a period of six years.

In 2017, the market gains have occurred even though economically US is forecast to have less than expected growth. Traders have reportedly shrugged off the data and focused on strong earnings growth. Low inflation and rising global growth could also be attributed to the longevity of this bull market.

For the first time in its 121-year history, Dow Jones Industrial Average broke the 22,000 barrier on August 2017. US President Donald Trump has often taken credit for the robust performance of the stock market since he assumed office. He has often linked it to the growth of the US economy as well as the reduction of the nation’s debt. This is breaking with precedent as Presidents of the past have rarely linked stock market performance with their own. Stock markets follow a cyclical 10-year pattern. According to experts, nearly every American president in the past 70 years has eventually encountered a stock market storm.

Trump has repeatedly promised tax breaks while campaigning. Many note that the anticipation of a tax break has also boosted the stock market in 2017. In September 2017, the White House and GOP leaders released a new tax framework calling for cutting the corporate tax rate to 20 percent from 35 percent -- to provide U.S. companies estimated annual tax savings of roughly $200 billion. 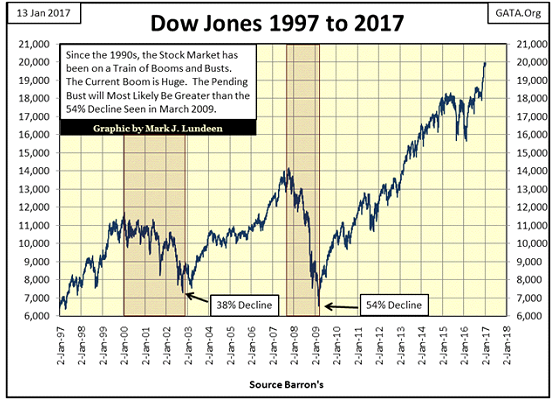 On October 30th, 2017, former Chairmen of the Trump presidential campaign, Paul Manafort and his former business associate Rick Gates were asked to surrender to Federal authorities. Manafort and Gates have been indicted on 12 counts, including conspiracy against the United States, conspiracy to launder money, false statements. In addition, news emerged that former Trump foreign policy adviser George Papadopoulos had already pleaded guilty to lying to the FBI about his contacts with Russia.

But Peter Cardillo, chief market economist at First Standard Financial, said that current political uncertainty within the Trump administration has possibly concerned investors noting, "The market could be awakening to the fact that the political situation is coming back into focus ... that could cap the market from moving higher."

In addition to the developments in the Russia investigation, reports have also emerged about a change in the proposed tax cuts. The US House of Representatives is reportedly planning on only gradually decreasing the corporate tax. Bloomberg reported that the discussions aren’t final but there is a possibility that the House would leave the corporate rate at 20 percent by 2022. That report "is absolutely hitting the market," said Dave Lutz, head of ETF trading at JonesTrading. "We started reversing as soon as the headline hit."

Rick Meckler, president of LibertyView Capital Management in Jersey City, New Jersey also agreed that reports about the corporate tax resulted in the dip in the markets. He said, “A lot of people are looking to that corporate tax cut as a reason for the next leg up in stocks. We are in a market that has just been on an absolute low-volatility, steady climb for quite a while, so you don’t need much of a reason for it to take a periodic step back, particularly a small step back.”

In addition, key groups like the National Association of Home Builders, have announced that they will be oppose the Republican tax bill casting the future of the bill into doubt.

Our assessment is that the Trump White House might be losing the trust of investors and financial institutions in Wall Street. The political chaos within the administration as the investigation headed by Mueller progresses is massive obstacle to Trump’s agenda. This also affects the larger Republican mandate as the political party has long promised tax cuts. The future of the Trump Presidency and the Republican party is now ambivalent.