Maldives opposition presidential candidate Ibrahim Mohamed Solih declared victory in the country's presidential elections on Sunday. The vote, seen as a referendum on democracy, will decide whether the country's President Abdulla Yameen will win a second five-year term. The Maldives is an Islamic..

The vote, seen as a referendum on democracy, will decide whether the country's President Abdulla Yameen will win a second five-year term.

The Maldives is an Islamic republic which lies off the Indian sub-continent. It is made up of a chain of nearly 1,200 islands, most of them uninhabited. The tiny region can be described as a mixed economy which is based on the principal activities of tourism, fishing and shipping. Development of the infrastructure in the Maldives is mainly dependent on the tourism industry and its complementary tertiary sectors, transport, distribution, real estate, construction, and government.

The first multi-party elections held in the Maldives took place in 2008, following a 30-year rule by Maumoon Gayoom. Mohamed Nasheed was the first democratically elected President of the country. Protests broke out in 2011 over the administration’s inability to operate effectively. After an escalation of protests in February 2012, Nasheed resigned. He later said that he was forced to resign with a “gun held to his head” in a coup. Nasheed was succeeded by Abdulla Yameen after a highly contested election in November 2013.

In 2015, Nasheed was convicted on charges of terrorism and sentenced to 13 years in prison.

In February 2018, the Yameen government declared a 15-day state of emergency. Soon after, security forces stormed the Supreme Court. The Supreme Court judge, chief justice and chief judicial administrator were arrested, as well as Gayoom, now a member of the opposition who had expressed support for the ruling.  Mohamed Nasheed, in a Twitter post, said Yameen has "overrun the judiciary and legislature, arrested hundreds of unlawfully and introduced a "new normal" in the Maldives - full dictatorship".

The President of the Maldives is elected using the two-round system; if there are more than two candidates, and no candidate receives a majority of the vote in the first round, a second round will be held. The recent Presidential elections were held on 23 September 2018. Incumbent President Abdulla Yameen ran for re-election. In June 2018 the Maldivian Democratic party selected Ibrahim Mohamed Solih as its candidate after Nasheed withdrew his candidacy. 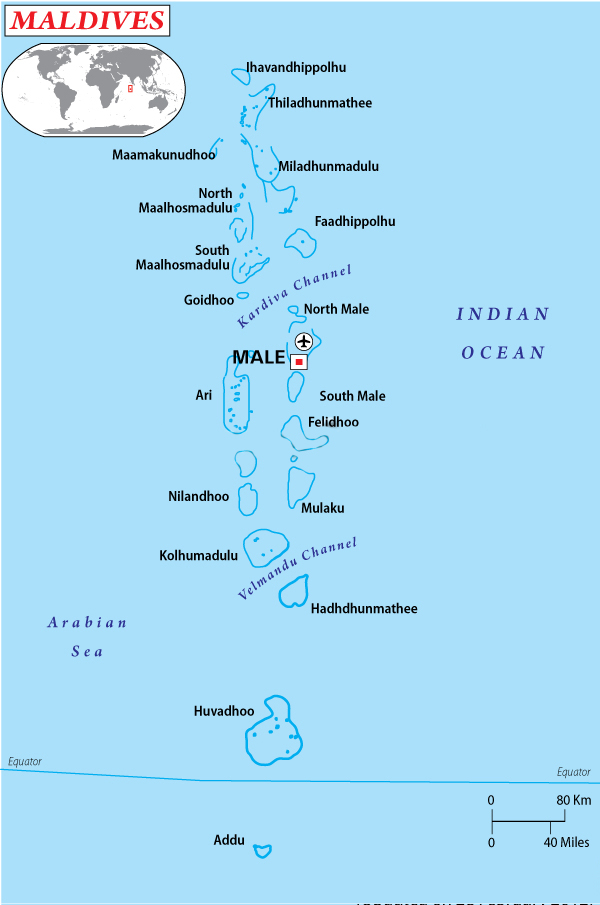 Read more of our extensive analysis of the political crisis in the Maldives here, and here

Voters in the Maldives have thrown out the incumbent president, Abdulla Yameen, in an extraordinary rebuke to a leader who jailed political opponents and judges and drew his country closer to China during a tumultuous five-year term.

With more than 80% of the ballots counted on Sunday night, Ibrahim Mohamed Solih, popularly known as Ibu, was ahead by an unassailable 17 points in an election viewed as a referendum on democracy in the Indian Ocean archipelago.

More than a quarter million people, out of a population of nearly 350,000, are eligible to vote in the island nation, which has been in turmoil since its first democratically elected leader, Mohamed Nasheed, was forced out of office in 2012.

At a final rally in Male on Saturday, Yameen said the choice on Sunday was between Islam and "infidelity". Yameen, 59, is yet to concede but Solih has claimed victory in the capital, Male. “This is a moment of happiness, a moment of hope, a moment of history,” Solih told an audience of journalists and members of his campaign team. “For many of us this has been a difficult journey, a journey that has led to prison cells or exile. It’s been a journey that has ended at the ballot box. I must thank all those people who have struggled for this cause.”

Transparency Maldives, a local monitoring group, said its early results had shown Solih was the victor “by a decisive margin”. “We call on all stakeholders to maintain an environment conducive for a peaceful transfer of power,” the group said. Most poll monitors, including those from the European Union and the United Nations, declined the government's invitation to observe the election, fearing their presence might be used to endorse Yameen's re-election even after possible vote rigging.

Analysts had said Yameen was in a tough contest to win a second term against an opposition of disparate parties united by the goal of removing him from office. But few were willing to predict his downfall given his control of the country’s election commission, its supreme court and the public broadcaster. The US and EU had both threatened sanctions against Yameen and members of his government if they were seen to be interfering in Sunday’s poll.

Monitors said a record number of people voted on Sunday, with lines snaking around the blocks of many polling booths and the voting deadline extended by three hours to accommodate the demand.

Nasheed, who is in exile in Sri Lanka, told reporters in Colombo that the vote was for democracy and freedom.

Our assessment is that should Solih become president, he will face challenges in keeping his disparate coalition together and in striking a balance between India, the country’s traditional patron and protector, and China, which has the wealth and willingness to fund the small country’s development.