In 2018, in a surprising ruling, a court in the Maldives threw out the "terrorism" conviction against the island nation's former President Mohamed Nasheed. He was the nation’s first democratically..

In 2018, in a surprising ruling, a court in the Maldives threw out the "terrorism" conviction against the island nation's former President Mohamed Nasheed. He was the nation’s first democratically elected President. The court also ordered the release of several other jailed politicians.

However, the President has refused to release his political prisoners further plunging the region into chaos. Furthermore, security forces sealed off the country's parliament and arrested two opposition lawmakers.

The Maldives is an Islamic republic which lies off the Indian sub-continent. It is made up of a chain of nearly 1,200 islands, most of them uninhabited. Only 198 of the islands part of Maldives have human habitation. It lies southwest of Sri Lanka and India. The chain of 26 atolls stretches from Ihavandhippolhu Atoll in the north to the Addu City in the south.

The tiny region can be described a mixed economy which is based on the principal activities of tourism, fishing and shipping. Development of the infrastructure in the Maldives is mainly dependent on the tourism industry and its complementary tertiary sectors, transport, distribution, real estate, construction, and government. Taxes on the tourism industry have been plowed into infrastructure and it is used to improve technology in the agricultural sector.

On 29th June 2010, Nasheed's 12 cabinet ministers resigned en masse, protesting the behaviour of opposition MPs who they said were “hijacking” the powers of the executive and making it impossible for the cabinet Ministers to discharge their constitutional duties and deliver the government’s election manifesto.

In 2011, peaceful protests broke out against the administration. They would continue, eventually escalating into the resignation of President Mohamed Nasheed in disputed circumstances in February 2012. In 2012, Nasheed resigned after the protests turned violent and military and opposition also joined in. He said that he was forced to resign in what he described as a coup. 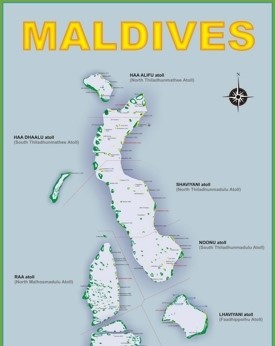 In 2015, Nasheed was convicted on charges of terrorism and was sentenced to 13 years in prison after being found guilty of terrorism. “The prosecution’s evidence proved beyond reasonable doubt that Nasheed ordered the chief judge’s arrest or forceful abduction and detention,” the judge, Abdulla Didi, said in the court in the capital, Malé.

Nasheed reacted at the time by calling on the people of the Maldives to “to confront the dictatorial power of this regime” and “to take all of your lives in your hands and to go out on to the streets”. “Do not consider either the security of your personal lives or the transitory happiness of your wives, husbands, children, parents and relatives; for the security of all of your children and their children is in jeopardy,” he said. At the time, the UN called the trial unfair.

In 2018, in a surprising ruling, a court in the Maldives threw out the "terrorism" conviction against former President Mohamed Nasheed, and ordered the release of several other jailed politicians.

In addition, 12 parliament members who had been stripped off their seats back in 2017 were also reinstated by the court. These members had been stripped from power after they collectively defected to the opposition party. The main opposition Maldivian Democratic Party (MDP) hailed the ruling, describing it as a "death knell for President Yameen's corrupt and criminal dictatorship". Yameen had come into power in 2013 after a disputed election.

This will result in the opposition party ending up with majority control in the parliament and the powers to impeach the President. Yameen is a half-brother of Maumoon Abdul Gayoom. He has been accused of corruption.

The crisis has further escalated in recent days. After President Abdulla Yameen refused to free his jailed opponents, the Maldives Supreme Court has hit back. Judges of the nation’s top court said there should be "no legal barrier" in freeing the prisoners. On Sunday, security forces sealed off the country's parliament and arrested two opposition lawmakers.

Our assessment is that political uncertainty in Maldives has resulted in the erosion of the nascent democracy in the region. However, the court’s ruling to release political prisoners could change the political landscape. This development may pave way for a more conducive environment for a competitive presidential election in 2018.

Maldives reaches out to China