The second round of voting clearly went to the centrist President Emmanuel Macron, giving him a respectable victory margin over his far-right rival, Marine Le Pen. However, with Europe in turmoil, questions are being asked, both inside France and outside the Republic, what does Macron’s win mean for France and for Europe?

The world was waiting eagerly to see what would happen. Would Macron be the first French president in decades to be re-elected, or would the far-right see a resurrection in Europe? President Macron was losing popularity for his poor economic performance, with spiralling inflation pushing up the cost of living. On the other hand, a far-right resurgence in one of the most powerful nations of Europe would have significantly more profound consequences and implications on the European landscape. 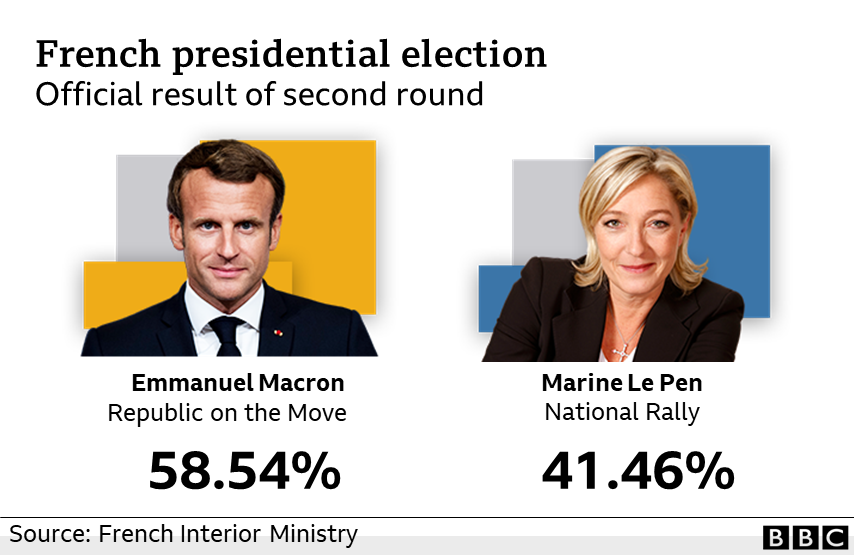 The Ifop predicted that this race would end 51 to 49 in favour of Macron, but when the votes were finally tallied, the victory margin was 17 per cent. President Macron had broken the jinx, becoming the first president in the last two decades to be re-elected. In his victory speech, he acknowledged the sentiments of the far-right voters, saying, “An answer must be found to the anger and disagreements that led many of our compatriots to vote for the extreme right…It will be my responsibility and that of those around me.”

While he may have won the Presidential elections, the real work for President Macron starts now. In June, he will face the first test during the national assembly elections. There is little time available to him to turn the large portion of the disgruntled electorate in his favour. A loss in these elections could potentially lose him his majority and the ability to form a government. It must be understood that, firstly, many citizens voted for him in the second round only to stop Le Pen from coming into power and secondly, voter turnout for this election was the lowest in 50 years, with 28 per cent of eligible voters choosing not to vote. In fact, as per a BBC survey, 63 per cent of voters would want to see him lose his majority and share power with the opposition in a coalition.

If Macron wants to retain his majority government, he needs to act fast and change the public perception. Experts see him taking a significant move, replacing the current prime minister with labour minister Elisabeth Borne as she has a strong record on social issues. Macron also wants a woman to be Prime Minister. Among young voters, important issues include the environment, education and health. Over 40 per cent of voters between the ages of 18 and 24 did not vote, so by making moves on these issues, Macron may be able to secure some younger voters.

However, the critical issue for the French people remains the cost of living. If the current government hopes to regain popularity, it must act quickly on this issue. The finance minister has already promised to keep price caps on petrol and electricity.

Internationally, President Macron’s victory was well received by both the Americans and Europeans. Of course, European leaders did not want Le Pen to win due to her anti-EU sentiments.

Although Marine Le Pen and her party have taken another loss, this result can still count as a win for the far-right. The National Rally has only made it to the presidential runoff a total of three times and are yet to win; however, their score has been improving dramatically. She jumped by over 7 per cent from the last election, while Macron fell by 8 per cent.

Many people believe that the name Le Pen itself is a stain. Marine Le Pen herself had removed her surname from her campaign ads. Her last name is rooted in an ideology that she has tried to distance herself from. Fifty per cent of the French Public still views her as a fundamental threat to democracy. The more significant questions remain: What is the future for Le Pen? Will she be replaced? And what is the future path for the National Rally? Will they continue to do what they are doing or try to make allies with nationalists and/or the centre-right?