Pharmaceutical giant gears up for a wave of incoming lawsuits which may amount to billions in damages. Monsanto is an agrochemical and agricultural biotechnology corporation headquartered in Creve Coeur, Greater St. Louis, Missouri. Monsanto was one of four groups to introduce genes into plants in 1983 and was among..

Pharmaceutical giant gears up for a wave of incoming lawsuits which may amount to billions in damages.

Monsanto was one of four groups to introduce genes into plants in 1983 and was among the first to conduct field trials of genetically modified crops in 1987. It was one of the top 10 U.S. chemical companies until it divested most of its chemical businesses between 1997 and 2002.

Monsanto is also one of the first companies to apply to agriculture, techniques developed by biotech drug companies. The US Department of Justice has approved the controversial takeover of Monsanto by rival Bayer Corporation. The deal, which was under scrutiny due to competition concerns, was also approved by the EU in March this year.

Monsanto developed Roundup, a glyphosate-based herbicide in the 1970s, and became a major producer of genetically engineered crops. Roundup is the herbicide that was proven to have caused cancer in a California farmer – who was recently awarded $289 million in damages. 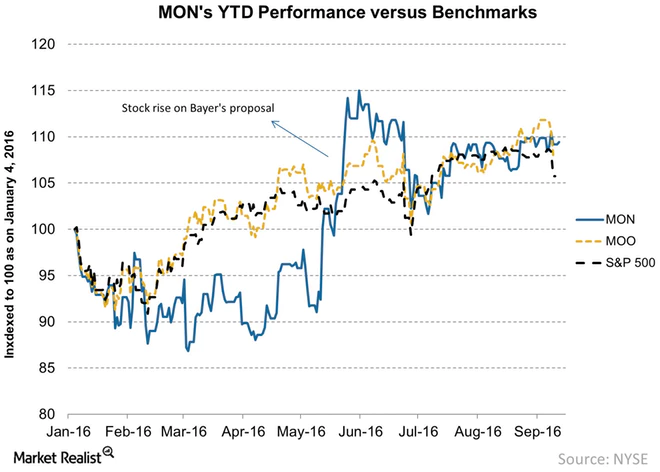 Read more about the lawsuit against Monsanto here.

American agro-chemicals company Monsanto is facing a surge in lawsuits that may cost its new owners, Bayer, billions in damages. Monsanto manufactures glyphosate-based weedkillers which some believe are carcinogenic. Last month it lost a $289m (£225m) court case that alleged its products Roundup and RangerPro had led to a Californian man's terminal cancer. Bayer said the number of outstanding cases had risen from 5,200 to 8,000.

The German firm's shares have lost 11% of their value since it lost the case in a California court to groundskeeper Dewayne Johnson, who claimed Monsanto herbicides containing glyphosate, had caused his non-Hodgkins lymphoma. Bayer shares fell another 1.7% on Thursday. Chief executive Werner Baumann said that when it bought Monsanto, Bayer "could not foresee the scope of the current lawsuits." The $63bn deal was completed earlier this month.

"In the course of the acquisition, we carried out due diligence as is standard practice when taking over a listed company. In doing so, we of course also considered the legal risks," he said in an interview with Germany's Handelsblatt newspaper.

Mr. Baumann added: "Our view is that the number is not indicative of the merits of the plaintiffs' cases". Mr. Baumann reiterated Bayer's stance that the court's verdict was not in line with the approach taken by regulators in the US and elsewhere, which allow the use of glyphosate-based weedkillers.

However, scientific opinion is divided. The U.S. Environmental Protection Agency last September concluded that glyphosate is not likely to be carcinogenic to humans. But the World Health Organization in 2015 classified glyphosate as "probably carcinogenic to humans." Bayer said it will try to have the Californian verdict reversed and, if that fails, it would take the appeal process further.

Mr. Bauman said the company would defend all the cases brought against Monsanto rather than settle them out of court. Liam Condon, head of Bayer's Crop Science division said: "Nothing whatsoever has changed in the regulatory status of the product. There is simply very high demand and has been for many decades, for glyphosate. It is an invaluable tool for growers."

Chief Financial Officer Wolfgang Nickl said that Bayer's next financial results, due next month, would set aside money for legal defence costs but not for any possible future damages. With over 8,000 outstanding legal cases, Monsanto (and therefore, Bayer) stand at the cusp of a massive legal battle which will shape legal precedents for decades.

Bayer’s decision to fight the cases instead of settling them out-of-court implies that the company will largely deploy a defence revolving around the scientific conclusion that a majority of lymphoma cases are idiopathic - meaning the cause is unknown; it is not necessary to link every disease to a causative test.

Our assessment is that Monsanto’s legal troubles are a beginning in a new era where pharmaceutical and biotech companies are being held publicly accountable. For decades, herbicides have caused damage, directly or indirectly to humans. People who work on farms or consumer products from a farm using these herbicides have reported irreversible damage and this wave of lawsuits will set a defining precedent which will help thousands of people get justice. We also feel that companies have to be extremely careful during potential acquisitions, mindful of the track record of the target company. We feel that in this case, the chequered history of Monsanto was known.