A series of laws introduced by the new administrator of Lakshadweep, Praful Khoda Patel, has kicked up a storm in the islands, generating much unease and dissent.

The Lakshadweep Islands, previously known as the Laccadive, Minicoy and Amindivi Islands, was deemed a union territory in 1956. They have predominantly been a matrilineal community, mostly dependant on fishing and coconut cultivation for their livelihood. The official language is Malayalam (similar to the state of Kerala) and the majority religion is Islam. It is the smallest union territory of India with a population of less than One Lakh. 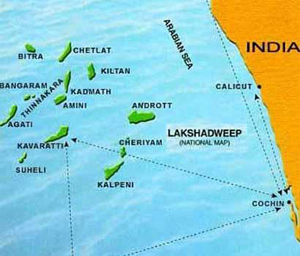 The recent controversy in this region has been sparked off by a decision of the administrator to ease strict quarantine rules, leading to a plethora of Covid-19 cases where previously none had existed. While this has caused massive outrage, it is not the main bone of contention in these islands.

In a move to generate income and make the island a thriving tourist spot, the current administration has spearheaded three new high-octane legislations.

Firstly, the Prevention of Anti-Social Activities Regulations 2021 was introduced in the wake of protests stemming from the mishandling of the pandemic. This legislation has provisions which makes it legal to preventively detain someone without trial for ‘maintenance of public order’. This law is set to be passed despite the 2019 National Crime Records Bureau stating that Lakshadweep has the lowest crime rate in the country.

The second regulation is the Lakshadweep Panchayat Regulation 2021, which is set to have a direct impact on the democratic structure of the island. Under the law, there is a significant curtailing of the powers of local governments, especially in areas of education, health, fisheries etc. This, in turn, has vested more power in the hands of the central administrator. The law has also mandated the 50% reservation of women in local panchayaths, which was hitherto not implemented.

The third and the most ire-provoking legislation is the Draft Lakshadweep Development Authority Regulation (LDAR). This regulation aims to bring about a future wherein Lakshadweep will be like its close neighbour Maldives, a modernised island with a flourishing tourism industry.

Such legislative reforms have been on the central government’s agenda since 2017, when the Island Development Agency (IDA) was constituted. Under the proposed IDA (with the CEO of Niti Aayog being its convenor), the Lakshadweep islands is set to to bring in more private players and foreign direct investments. Three water villa projects are already being planned in Minicoy, Kadmat and Suheli. The revenue generated will create more job opportunities for the native youth, so that they need not migrate to find attractive prospects elsewhere. Another move towards modernisation is the introduction of submarine optical fibre cable to improve internet connectivity and reception, which will help in further digitization of the island. This project is expected to be completed by 2023-24.

However, it gives overarching powers to the planning and development authority as well as the central administrator to directly interfere with the property rights of the native population. It can remove, modify, and even relocate the property of the people for proposed developmental projects. These projects also threaten the ecologically sensitive nature of these islands, which host multiple flora and fauna, including marine species.

These projects are said to be based on the larger vision of sustainable development, as approved by the Integrated Island Management Plan (IIMP) of the Ministry of Environment, Forest and Climate change. The IIMP is a project to better manage islands and their socio-ecological resources by learning and borrowing from existing indigenous structures and systems as well as modern-day science.

Such initiatives, however, are criticised for over-riding indigenous ways of livelihood. The imposition of a beef ban in an island where the majority population follow Islam and/or are members of the Scheduled Tribes community has raised red flags. Moreover, the undemocratic nature of rail-roading these projects without proper consultations with stakeholders; the arbitrary dismissal of native employees working in state-owned tourist spots; the onslaught of new regulations without democratic participation, all have raised questions about the ability of the government to deliver on its promise of sustainable development.