The Kurdistan Regional Government has announced that it is willing to freeze the results of the recent referendum calling for its independence..

The Kurdistan Regional Government has announced that it is willing to freeze the results of the recent referendum calling for its independence.

The Iraqi Kurds have offered to suspend the results of their recent independent referendum in a symbolic gesture that signals the temporary shelving of their aspiration to establish their own state.

The Kurds are a Northwestern Iranic ethnic group in the Middle East. They have historically inhabited the mountainous areas to the South of Lake Van and Lake Urmia, a geographical area collectively referred to as Kurdistan. Over the millennia, numerous ethnicities have migrated, settled or natively inhabited the area including Turks, Persians, Arabs, Kurds, Armenians, Assyrians, Chechens, Azeris and others.

Between 25 and 35 million Kurds inhabit a mountainous region straddling the borders of Turkey, Iraq, Syria, Iran and Armenia. After World War I, many Kurds began to consider the creation of a homeland. The Western allies who won the war even made provisions for a Kurdish state. However, Treaty of Lausanne, which set the boundaries of modern Turkey removed that provision.

In Iraq, there are about 5 million Kurds in the nation. The region is Kurdistan has been given autonomy and has a regional government in place. In 2014, Iraqi Kurdistan President Massoud Barzani said that his government intended to hold a referendum on independence that year. It was cancelled as a new government came into place in Iraq and relations between main Iraqi government and Kurdistan improved.

On September 25th 2017, another referendum was held in Kurdistan despite the fact it was condemned by the UN. 78% of the 5 million Kurdish population voted in the elections and more than 92% voted in favor of independence. This resulted in a political crisis in Iraq. Turkey announced that it would shut down all exports from Kurdistan. Iraq also threatened an embargo if Kurdistan did not hand over control of the international airports in the region. 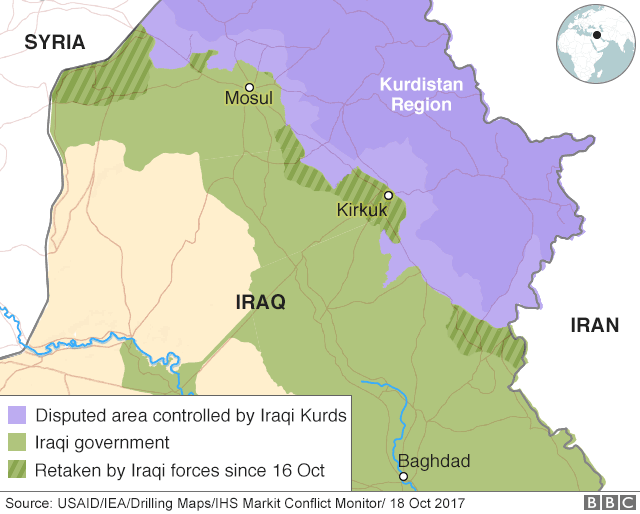 In October 2017, Iraqi government initiated a military offensive to take control of a disputed region called Kirkuk. In 2014, Kurdish forces took control of oil-rich Kirkuk after the Iraqi army fled a major offensive by ISIS. Neither Iraq nor the local government of Kurdistan have been able to agree on who gets to control the area - and also benefit from its vast oil wealth.

Kurdistan lost the control of Kirkuk within a day. This was because the region wasn’t only home to the Kurds and had a diverse population of other ethnicities as well. Additionally, the opposition government in Kurdistan did not support the referendum and troops that were loyal to that faction did not fight the Iraqi forces. Only days after losing Kirkuk, the Iraqi government announced that it had frozen the results of the referendum and was willing to participate in a diplomatic dialogue with Baghdad.

The regional government announced in a statement, “As Iraq and Kurdistan are faced with grave and dangerous circumstances, we are all obliged to act responsibly in order to prevent further violence and clashes between Iraqi and Peshmerga forces.”

It also stated the following, “Therefore, in order to fulfill our responsibilities and obligations towards the people of Kurdistan and Iraq, we propose the following to the Iraqi Government and the Iraqi and world public opinion:

1. Immediate ceasefire and halt all military operations in the Kurdistan Region.

2. Freeze the results of referendum conducted in the Iraqi Kurdistan.

3. Start an open dialogue between the Kurdistan Regional Government and Iraqi Federal Government on the basis of the Constitution.”

In September 2017, Iraqi Prime Minister Haider al-Abadi called for a dialogue between Kurdistan and Iraq. At the time he said that the vote was a threat to the "peaceful co-existence among Iraqis, and is a danger to the region", adding that he would "impose Iraq's rule" in the area.

US Secretary of State Rex Tillerson made a recent stop to Iraq. The Iraqi as well as the Kurdish troops are key allies for the US in its fight against ISIS. The country has been advocating a resolution in fears that this conflict would further destabilize the region.

Our assessment is that the latest move of the Kurds is in deference to the intervention of world powers that wanted to avert any further escalation of conflict between key allies in the fight against Islamic State group that has sealed more than thirty combatants killed. The Kurds also wanted to ensure no further loss of territory to the Iraqi army. We believe that, the Kurds will now negotiate for greater independent powers during dialogues with Bagdad.