Koreas: Committed to era of no war

North Korea said it would close a key missile test facility in the presence of international experts and potentially destroy its primary nuclear complex if the United States agrees to corresponding measures. The Korean peninsula was divided post World War II in 1945. In 1950, North Korea..

North Korea said it would close a key missile test facility in the presence of international experts and potentially destroy its primary nuclear complex if the United States agrees to corresponding measures.

The Korean peninsula was divided post World War II in 1945. In 1950, North Korea, supported by China and Russia, invaded South Korea. The United Nations and US forces intervened on behalf of the South and the invading army was driven out during the Korean War. The two nations signed an armistice in 1953, however, there has been no peace treaty and they are technically still at war.

US President Donald Trump had earlier taken an aggressive stance while countering North Korea. Both Kim Jong Un and Donald Trump were locked in an extended war of words in 2017, with both threatening wars.

In 2018, the tide turned in the ties between the US and North Korea. It began with the North Korean leader announcing that he was willing to enter into diplomatic discussions with South Korea. Since then, the relationship between South Korea and North Korea has exponentially improved. North Korea sent across a delegation to participate in the Winter Olympics held in Seoul. In March 2018, a South Korean delegation headed to North Korea to partake in historic talks to ease the tensions that have built up in the Korean peninsula. 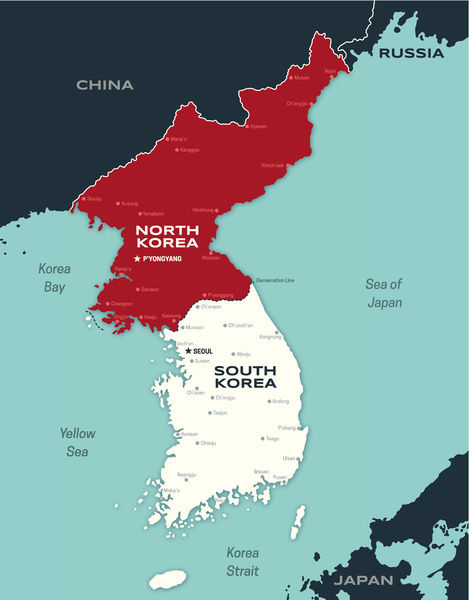 South Korean president Moon Jae-in has announced in a joint press conference with Kim Jong-un that North Korea will shut down key missile test facilities in the presence of “international experts” and is willing to close its only known nuclear complex if the United States makes reciprocal measures.

The two leaders also agreed during a three-day summit in Pyongyang to connect two rail lines, on the east and west side of the peninsula, across one of the most militarised borders in the world. Kim also said he would visit Seoul in the “near future”, a move that would make him the first North Korean leader to visit the South’s capital.

North and South Korea agreed that the Korean Peninsula should turn into a “land of peace without nuclear weapons and nuclear threats”, Moon said. Any transport links would require the approval of the US-led United Nations Command, which oversees the border region. “There is not only going to be a smooth road ahead, there will be challenges and trials, but the more we overcome them the stronger we will become,” Kim said. “We are not afraid of future challenges.” The agreement signed in Pyongyang “will open a higher level for the improvement in relations” between the two Koreas, Kim added.

The two countries also pledged to Submit a joint bid to host the 2032 Summer Olympics, create rail and road links between the North and South within the next year, stop military drills aimed at each other along the Military Demarcation Line, which divides the two countries, by November 1, remove 11 guard posts in the demilitarized zone by the end of the year and normalize the Kaesong Industrial complex and Kumgang tourism project as soon as the conditions allow.

The two sides will also establish a permanent venue for families divided by the 1950-53 Korean war to meet more frequently. In the past, most families could only see relatives for only a few hours, and usually only one time.

The trouble with North Korea is its unpredictability during negotiations. Despite the pledge made by Supreme Leader Kim Jong-Un, there is no guarantee of North Korea de-nuclearizing without the sanctions being lifted. Seoul and Pyongyang can issue many joint statements on cooperation, but the involvement of the US implies a nod of approval from Washington for every small act of cooperation between the two countries.

Our assessment is that President Moon hopes to break an impasse in talks with the US over North’s denuclearisation and push for a reversible and permanent peace between the two countries. We also believe that President Moon will encourage business tycoons, including Samsung, to expand cross-border business projects.