Over 130 people have died in Kenya and 300,000 have been displaced because of heavy rains and floods across the equatorial country. The WEF has estimated ..

Over 130 people have died in Kenya and 300,000 have been displaced because of heavy rains and floods across the equatorial country.

The WEF has estimated that natural disasters cost the world $1.5 trillion in damage between 2003 and 2013. They caused more than 1.1 million deaths and affected the lives of over 2 billion people.

Kenya is a country on the east African coast bordered by Somalia and Ethiopia in the North, South Sudan and Uganda in the west, and Tanzania in the south. The country is known as “the cradle of humanity”, due to archaeological evidence of what may be the earliest of human ancestors dating from 3.3 million BC. Some of the earliest known inhabitants of the region are the Bantu people. Kenya has historic trade ties to the Arab world, Persia, and India. European exploration in the region began in the 1800s, and the British Empire established the East Africa Protectorate in 1895. In 1920, it became the crown colony of Kenya.

Kenya gained independence in 1963. The country was a de facto one-party state from 1969 until 1982. The country began political liberalisation in 1991. The country held peaceful, multiparty elections in 2002 when President Daniel Moi stepped down. Kenyan elections have been marred by ethnic violence and allegations of fraud. The current Kenyan President, Uhuru Kenyatta, won a hotly contested but largely peaceful election last year. Kenyatta is the son of Jomo Kenyatta, independence leader and the country’s first President.

Kenya has been called the “economic, financial, and transport hub of East Africa.” GDP has averaged at 5% since 2012. Kenya remains a largely agrarian economy, with agriculture contributing approximately 35% of the GDP. Today, the country has a population of over 47 million, of which over 60% works in the agrarian sector. According to estimates, the unemployment rate is 40%, however, available figures are often unreliable. Kenya’s primary exports include petroleum products, tea, coffee, and other horticultural products. India is one of its primary import partners, second to China.

Kenya houses over 450,000 refugees and asylum seekers from Somalia, South Sudan, DRC, and Ethiopia. Additionally, there were approximately 135,000 Internally Displaced Persons as of 2016, a result of ethnic and political violence, and land disputes. 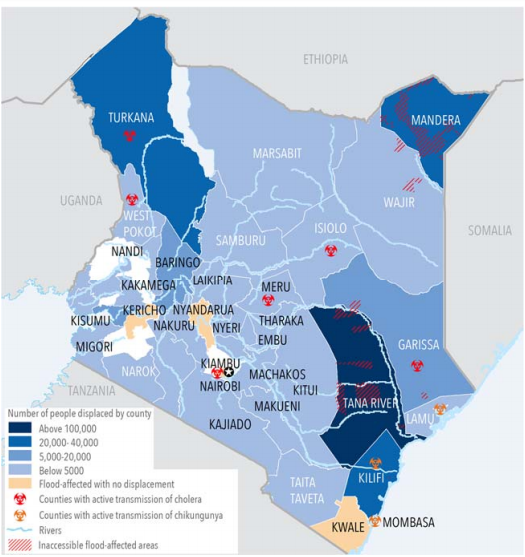 Kenya is facing widespread floods after months of heavy rains. According to the UN Office for the Coordination of Humanitarian Affairs, (UNOCHA), 311,100 people have been displaced and the death toll stands at 132.

Most recently, the Patel Dam in the Nakuru County in the Rift Valley region burst its banks, killing over 40 and displacing approximately 2,500 families. "Moving forward, we are taking every possible measure so that we don't see the situations we have seen," said government spokesperson Erick Kiraithe, adding that the present situation had taught "bitter lessons that warrant remedial actions." "We have deployed various institutions from the interior ministry which are actively executing rescue operations across the country," Kiraithe added.

Tana River was the worst affected county, with over 70% submerged. Other severely affected areas include Kilifi, Garissa, Wajir, Kisumu, Mandera, Isiolo, Turkana, Samburu, Baringo and Kajiado. Over 205 schools have been closed across these counties due to flooding, and approximately 8,000 hectares of farming land have been destroyed.

Additionally, the counties of Kilifi, Lamu, and Mombasa have reported cases of the chikungunya disease, and other regions have reported instances of cholera. Rift Valley Fever has been identified in animals in Baringo County. The Kenyan Ministry of Health has reportedly mobilised resources and response plans to contain the outbreaks.

“The national and local governments, together with the KRCS and humanitarian partners, are assisting flood affected people. Search and rescue of people marooned by floods is ongoing in several counties and the Government has called on people living in flood prone areas to move to higher ground,” UNOCHA reported. The Ministry of Devolution, county governments, Kenya Defence Forces, and the Red Cross are also involved in rescue operations.

Euloge Ishimwe from the International Federation of Red Cross and Red Crescent Societies (IFRC) noted that the floods came after a widespread drought last year. 2.7 million Kenyans were affected by food insecurity because of the droughts. “The livelihoods and resilience of the affected communities had already been weakened… With the flooding, we are worried that these communities will be further rendered more vulnerable,” Ishimwe said.

Unseasonal rains have also affected Somalia and Rwanda.  In Somalia, flash floods and river flooding has affected over half a million people and displaced over 200,000.

Our assessment is that natural disasters have enormous economic and humanitarian consequences. These floods could have a devastating impact on Kenya’s agrarian economy. We believe that governments could implement early warning and risk management strategies to limit the destruction caused by natural disasters such as floods.