Jobs on the line

The chief executive of Deutsche Bank, John Cryan, has hinted the bank could cut tens of thousands more jobs as it turns to technology to bring costs into line with sharply..

The chief executive of Deutsche Bank, John Cryan, has hinted the bank could cut tens of thousands more jobs as it turns to technology to bring costs into line with sharply lower revenues.

Automation and better technology have been labelled as the main culprits for future unemployment. This is because robots and automation will be able to do the jobs that were previously held by human beings.

Developing nations like India with a growing labor force will also face a massive challenge in the years ahead. According to research by human resources (HR) solutions firm PeopleStrong, by 2021 nearly a quarter of people in India will be losing their jobs to automation. “These job cuts due to automation will not happen immediately, but the impact will become prominent by 2020. The change has started, with companies introducing bots for customer service, managing warehouses, etc.,” said Pankaj Bansal, co-founder and chief executive officer of PeopleStrong.

Deutsche Bank AG is a German banking and financial services company with over 100,000 employees from across the world. The bank has a presence in over 70 countries with a large footprint especially in Europe and the Americas as well as emerging markets like India. 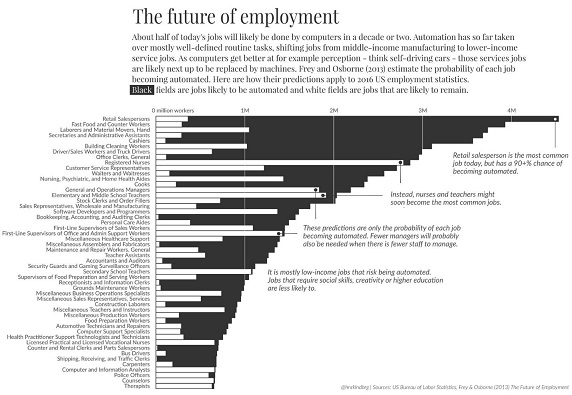 The bank had already signaled that it will be streaming its operations in 2015. As part of its five-year restructuring plan, it had announced that it will be cutting 9,000 of its 100,000 direct employees. In addition, 6,000 of its 30,000 indirectly employed contractors would also be let go.

At the time, John Cryan, Co-Chief Executive Officer said, “In April, we announced Strategy 2020. Since joining the Management Board in July, I have been working together with my colleagues to draw up plans to stabilise the bank and to turn around its long-term performance. Sadly, this also means closing some of our branches and country locations, and reducing some of our front-office and infrastructure staff too.”

Cryan has been criticized in the past for his blunt language with some stating that his words might demoralize staff. However, he has continued noting that the company will be cutting down on thousands of jobs due to the advent of automation. In an interview with Financial Times he said, “We employ 97,000 people. Most big peers have more like half that number. There we’ve got the most to gain. We’re too manual, which can make you error-prone and it makes you inefficient. There’s a lot of machine learning and mechanization that we can do.”

Cryan has justified his argument by stating that there are far too many employees doing redundant jobs. He said, “Every bank at the moment has a huge and burgeoning department of people who are doing the same stuff. It’s not a source of competitive advantage and you’re exposed to making your own mistakes. The truth is if I went to a load of branches, I’d wait quite a lot of the day before I encountered [any] customers. They just don’t come in as often as they used to.”

In October 2017, Deutsche promised savings of €900m from integrating its retail network with that of Postbank, its German retail banking subsidiary. Deutsche has already made 4,000 cuts of the 9,000 promised job cuts.

Our assessment is that automation will continue to result in job loss not only in banking but other sectors as well. Manufacturing sector is the most vulnerable. In order to ensure unemployment rates do not rise, governments should begin investing in skill development.