Chinese President Xi Jinping has solidified his position of power at the 19th National Party Congress. However, has the President been using his anti-corruption campaign..

Chinese President Xi Jinping has solidified his position of power at the 19th National Party Congress. However, has the President been using his anti-corruption campaign to weed out political challengers to ensure his power remains unquestioned?

Xi Jinping is the current President of China. He is also the current General Secretary of the Communist Party of China and he is the Chairman of the Central Military Commission. Jinping assumed power in China in 2012. From the time he came into power, the political landscape in China has also become decidedly more authoritarian. He is expected to stay in power until at least 2022, however, there are reports that he could seek an additional term. He has been front and centre of China's push to cement its position as a global superpower and a development of its military. Despite growing up in an illustrious family, Jinping’s father was purged in 1962 prior to the Cultural Revolution and imprisoned.

There have been those who have compared to another strongman in the nation’s history – Mao Zedong. He was the Chairman of the Communist Party of China from its establishment in 1949 until his death in 1976. The modern history of China would be incomplete without a mention of Zedong. For a brief history of China, click here.

Under the leadership of Jinping, China has become a more isolated nation. He has launched crackdowns on corruption and freedom of speech. In fact, tackling of corruption is one of his main governing agendas. In 2016, the government announced that in the span of three years, one million officials had been punished for corrupt practices. Those caught in the past range from low ranking officials to the top brass.

There has also been moves by the government to suppress freedom of speech. Internet is heavily censored and communication through messaging applications such as WeChat is closely monitored by the government. Details on the nation’s crackdown on individual privacy can be found here. 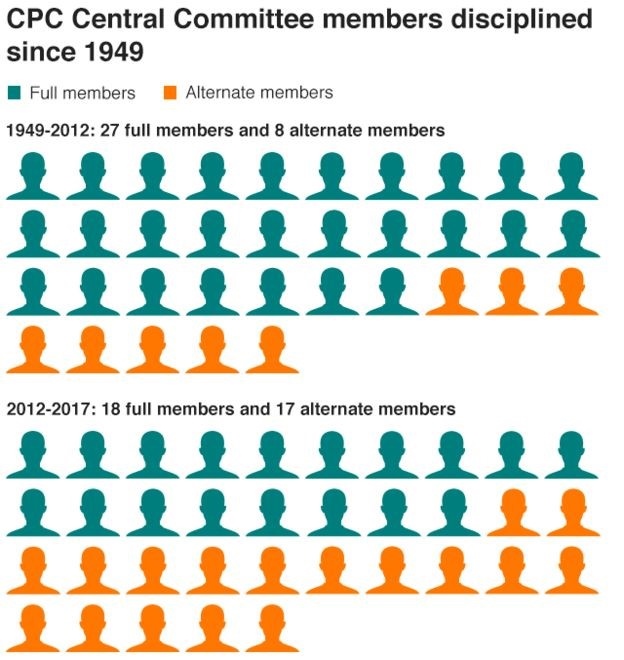 In the recent years, critics have consistently alleged that Jinping has used the anti-corruption campaign to remove anyone within the party who could be a political threat. The Central Commission for Discipline Inspection (CCDI) is one of the most powerful bodies and it has stated that more than 210,000 Chinese officials were punished on charges of corruption in the first half of 2017. CCDI also stated that it received 1.31 million complaints in 2017.

A recent BBC study has revealed that more than 170 ministers and deputy-minister level officials have been purged from their positions and jailed. Under the stewardship of Jinping, these officials have been punished for various charges including corruption, misconduct and violation of party discipline.

Two of the most politically high profile members who fell victim to the purge are: Sun Zhengcai and Yao Gang. Zhengcai was seen as many as the rising star within the party. Some had even labelled him as a possible successor to Jinping. However, in 2017 he was abruptly removed from office and charged with corruption. He is currently under investigation by the CCDI. Gang was the former vice chairman of China’s securities and a senior member of the party.

Wang Qishan, the anti-graft tsar in China, is also considered the second more politically powerful man in the country. By all accounts, he is fiercely loyal to Jinping and his mandate. There are those who have accused the Chinese President of filling positions of power with people who are loyal to him.

Dr Lee Wei Ling, the daughter of Singapore’s founding father Lee Kuan Yew, has been critical of Jinping. She recently said, “Xi is playing a game where he appears to weed out ‘corrupts’” while replacing them with “his own people. However, Chinese authorities maintain that the anti-corruption campaign has been thoroughly successful. Authorities have stated that Beijing had recovered 2.3 billion yuan (HK2.56 billion) from losses to corruption.

Our assessment is that Jinping has initiated every political move within his arsenal to ensure he remains the unquestioned leader of China in the immediate future. In order to protect his vision for the country, he has also seemingly picked out his own successor – Chen Miner. He is the party secretary of Chongqing. By some accounts, the man who is loyal to Jinping is being primed to take the mantle in the future. The question however remains on when Jinping is willing to give up his power.