As Japanese Prime Minister Abe celebrates his decisive win in the nation’s snap general elections in October 2017, the leader may be facing a grave threat – his own economy. 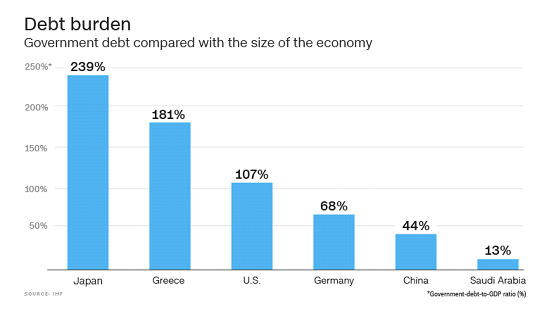 Despite the good prognosis, there are concerns about the actual state of the Japanese economy. Much of Japan’s growth has been on the backs on massive manufacturing industry. The nation is known for the products that many of its big companies manufacture such as electronics and automobiles.

In the recent years, the manufacturing sector in Japan in particular has taken a significant hit due to a series of scandals. One of the largest scandals was the Takata Corporation admitting to having covered up facts. The company’s airbags were directly linked to a number of deaths and injuries that had occurred across the world. This resulted in legal action against Takata. In 2017, Takata filed for bankruptcy protection in the US and Japan. It is facing billions of dollars in liabilities over its airbags. In August 2017, it was reported that Mitsubishi Motors missed employee warnings about widespread cheating on fuel economy data over 25 years. Additionally, Suzuki Motor has admitted to having exaggerating the fuel economy of its vehicles by cheating on tests.

In October 2017, Kobe Steel revealed that it had falsified data that resulted in affecting 19,300 tons of flat-rolled and extruded aluminum products, 19,400 units of aluminum casting and forgings, and 2,200 tons of copper products. This amounts to 4% of Kobe’s output from September 2016 to August 2017.

Japanese Prime Minister Shinzo Abe came into power in 2012 on the promise of rejuvenating the economy. Japan, while a developed nation, had been going through a period of near zero growth. Abe introduced a series of economic reforms that were called Abenomics. It is based on "three arrows" of monetary easing, fiscal stimulus and structural reforms.

Abe has decisively won the Japanese general election that was held on October 22nd, 2017. The Prime Minister now has to deal with a nation that is heavily in debt. Abe believes that by firing up the economy, the debt would be addressed. Experts do not necessarily ascribe to that view. Stephen Nagy, a professor at Tokyo's International Christian University said, “The view [is] growth is more important than dealing with the fiscal problem in the short-to-mid term.”

In addition, the manufacturing sector is undergoing a number of crises and this could also cause a slowdown in the economic growth as it may affect the exports. Professor Thomas Clarke, director at the center for corporate governance at Sydney's UTS Business School said, “The worry might be that the competitiveness and standards of Japanese corporations is slipping.” 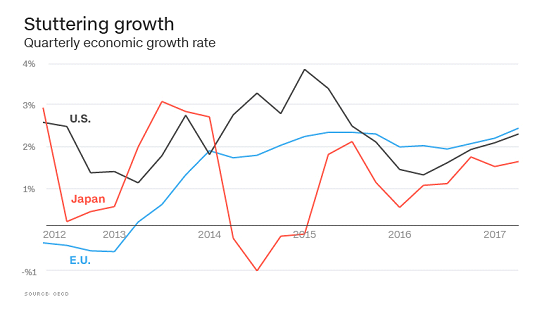 From the time Abe has come into power in 2012, Japan has fallen from 14th to 26th among Organization for Economic Cooperation and Development members in the World Bank's Ease of Doing Business report. "There's not much dynamism in the business sector," said Capital Economics' Thielient.

Abe will also have to deal with an ageing population that will also affect the economy. Despite the fact the unemployment rate in Japan is relatively low at 2.8%, the wage increases in companies are also low. Thus, the spending habits of the Japanese people is not extravagant.

Our assessment is that Abe will have to deal with two major agendas in his next chapter as the leader of Japan. The first agenda would be constitutional reform and the second agenda would be the economy. Abe faces a number of threats from the struggling manufacturing sector to an ageing population. Will there be another iteration of Abenomics? Will it propel Japan to continue its growth? We believe that the biggest threat to the Japanese economy and its sovereignty would be a war in the Korean peninsula.