Japan on the rise?

Japan has logged in its seventh quarter of economic growth in a row. The economy grew at an annualized pace of 1.4 per cent in the third quarter of 2017.

Japan has logged in its seventh quarter of economic growth in a row. The economy grew at an annualized pace of 1.4 per cent in the third quarter of 2017. This is the longest run of growth the country has recorded since 2001.

Rob Carnell, chief Asia-Pacific economist at ING told Financial Times that this growth was not due to any flukes. He notes, “This was not one of those flukey one-offs that was caused by a surge in inventories that will be worked down in coming quarters, or one of those random spikes caused by exports and imports growing out of sync.” Recently, Abe re-shuffled his cabinet and noted that economy would be his primary focus. 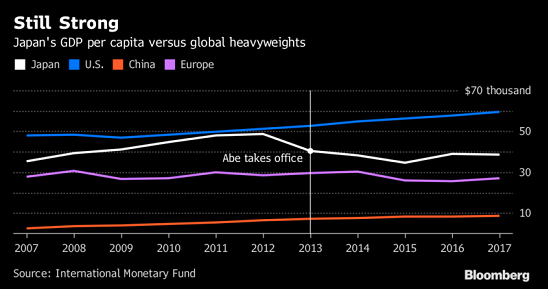 Japan has logged in its seventh quarter of economic growth in a row. The economy grew at an annualized pace of 1.4 per cent in the third quarter of 2017. This is the longest run of growth the country has recorded since 2001.

However, it slowed from a 2.6 percent annualized rate of growth in April-June. Even though the pace of expansion was slower than in the second quarter, it was well above Japan’s long-run trend of about 0.5 per cent.

“Household incomes continue to grow at a solid pace and external demand is holding up,” said Marcel Thieliant, senior Japan economist at Capital Economics in Singapore. “However, the economy is running into capacity constraints which suggests that growth will start to slow next year.”

"The bigger picture is that wages are not rising any faster this year than they did last year even though the labor market has continued to tighten," Capital Economics said in a recent report. "With Japan's population set to shrink further in coming years, expanding sales destinations overseas makes good business sense," it said.

There are other concerns as well. Much of Japan’s growth has been on the backs on massive manufacturing industry. The nation is known for the products that many of its big companies manufacture such as electronics and automobiles. In the recent years, the manufacturing sector in Japan in particular has taken a significant hit due to a series of scandals. Japan will also have to deal with an ageing population that will also affect the economy. Despite the fact the unemployment rate in Japan is relatively low at 2.8%, the wage increases in companies are also low.

Our assessment despite sustained growth, there are red flags that the government has to address. Currently, the rate of inflation is flat and employers remain reluctant in raising base wages. In addition, the nation’s ageing and shrinking population will be a cause of concern as well.