James Gordon Brown, the former UK Prime Minister has said that rogue bankers should be held accountable and jailed if found guilty. Post the September 11, 2001 attacks..

James Gordon Brown, the former UK Prime Minister has said that rogue bankers should be held accountable and jailed if found guilty.

Post the September 11, 2001 attacks, the US Federal Reserve stimulated the struggling U.S. economy by cutting interest rates to historically low levels. This resulted in a boom in the real estate market. Lenders began to extend mortgages to millions who couldn’t qualify for traditional bank loans. Housing prices therefore peaked in early 2006 and began to decline in 2006 and 2007. Many of the subprime mortgages were affordable in the beginning but rates spiked in 2007.

When America’s housing market turned, a chain reaction exposed fragilities in the financial system. In the meltdown that occurred in the wake of this crisis, several banks in Wall Street had to declare bankruptcies and a global recession followed. It is considered one of the worst financial crises.

The global financial crisis that stemmed from the subprime mortgage crisis in the US in 2007, is generally considered as one of the worst financial crisis to hit since the Great Depression in 1930s. It ultimately led to the collapse of the Lehman Brothers in 2008 and the banking industry only survived due to government bailouts that were arranged. However, that crisis quickly led to the European debt crisis which crippled the European economy as well. In order to prevent the banks and the economy from collapsing, governments across the world began introducing stimulus packages to aid banks. The British government put together a bank rescue package totaling approximately $850 billion was announced by on 8 October 2008.

James Gordon Brown is a former British politician who was Prime Minister of the United Kingdom and Leader of the Labour Party from 2007 to 2010. 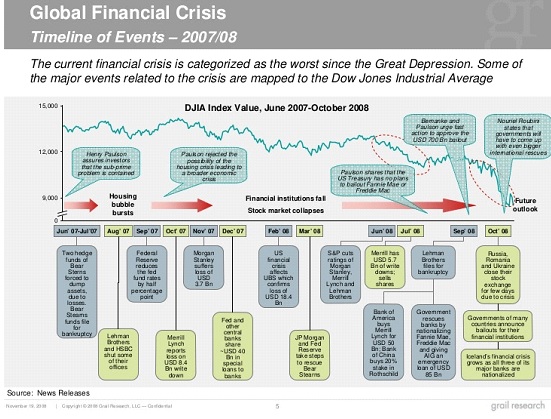 In 2017, a number of European based banks have settled on criminal investigations. In October 2017, the Royal Bank of Scotland agreed to pay $44 million as a settlement for an ongoing US criminal investigation. The bank has been accused of lying to its clients regarding investments between 2008 and 2013. In order to resolve the ongoing US investigation into the Libor scandal, Deutsche Bank has agreed to pay $220m (£150m). Royal Bank of Scotland, HSBC, Deutsche Bank, JP Morgan Bank, and Citibank have also been connected to the Libor scandal. For a detailed overview on the criminal proceedings, click here. In addition, in 2015, Deutsche has paid out £227m to the UK’s Financial Conduct Authority, $775m to the US Department of Justice, $800m to the Commodity Futures Trading Commission and $600m to the New York Department of Financial Services.

James Gordon Brown, the former UK Prime Minister has said that rogue bankers should be held accountable and jailed if found guilty. He has written a new memoir about his political career and has spoken extensively about the financial crisis. He writes, “If bankers who act fraudulently are not put in jail with their bonuses returned, assets confiscated and banned from future practice, we will only give a green light to similar risk-laden behavior in new forms.

Brown has also accused Conservatives of being too soft on bankers since taking office in 2010, Brown says: “Little has changed since the promise in 2009 that we bring finance to heel. The banks that were deemed ‘too big to fail’ are now even bigger than they were. With many banks backstopped by the taxpayers, they make their profits at least in part because of the government guarantee. The risks they are taking is often not with their money but with ours.”

He harshly notes that bankers are often rewarded for failure noting, “And often bankers are not being compensated for risk but rewarded for failure. It cannot be right that Fred Goodwin walked away with all of his past bonuses untouched, a tax-free lump sum … and even after he agreed to halve his pension it still was said to amount to £300,000 a year.”

Brown suggested provisions in the Fraud Act might be a tool for this to happen adding, “The Fraud Act 2006, which criminalizes fraud by false representation, failing to disclose information and abuse of position, may be more relevant.”

Our assessment is that experts across the world have begun voicing concern over the possibility of another financial crisis and a credit bubble. As we have stated earlier, the culture within financial intuitions have to change across the world. There are lessons to be learnt from the 2008 financial crisis – banks and investors were chasing profits rather than serving their customers.