Alassane Ouattara, President of the Ivory Coast, is planning to seek a third five-year term in next year’s presidential polls as his ruling coalition is set to face stronger competition for votes. Ivory Coast or Côte d'Ivoire is a country located in West Africa. Ivory Coast's political capital is...

Alassane Ouattara, President of the Ivory Coast, is planning to seek a third five-year term in next year’s presidential polls as his ruling coalition is set to face stronger competition for votes.

Ivory Coast or Côte d'Ivoire is a country located in West Africa. Ivory Coast's political capital is Yamoussoukro, while its economic capital and largest city is the port city of Abidjan. It borders Guinea and Liberia to the west, Burkina Faso and Mali to the north, Ghana to the east, and the Gulf of Guinea (Atlantic Ocean) to the south.

Ivory Coast is a republic with strong executive power vested in its president. Through the production of coffee and cocoa, the country was an economic powerhouse in West Africa during the 1960s and 1970s, though it went through an economic crisis in the 1980s, contributing to a period of political and social turmoil. In the 21st century, the Ivorian economy is largely market-based and still relies heavily on agriculture, with smallholder cash crop production being dominant.

Alassane Dramane Ouattara is an Ivorian politician who has been President of Ivory Coast (Côte d'Ivoire) since 2010. An economist by profession, Ouattara worked for the International Monetary Fund (IMF) and the Central Bank of West African States, and he was the Prime Minister of Côte d'Ivoire from November 1990 to December 1993, appointed to that post by President Félix Houphouët-Boigny. Ouattara became the President of the Rally of the Republicans (RDR), an Ivorian political party, in 1999. 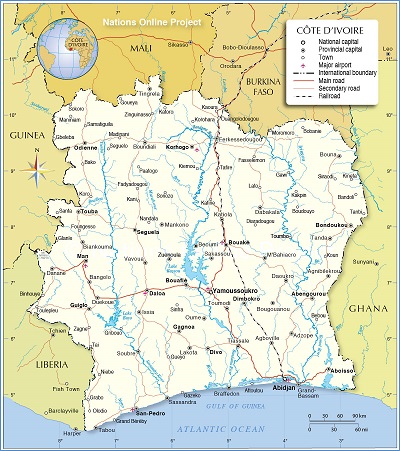 President Alassane Ouattara has informed his inner circle in the Rally of Houphouetists for Democracy and Peace coalition about his intentions, even though he hasn’t decided when the plan will be announced, said the people, who asked not to be named because they’re not authorized to speak publicly about the matter. Ouattara told his confidants that he is the strongest candidate to secure victory for the party in the election, said one person.

Ouattara “has said several times he will not seek a third mandate,” Massere Toure, his spokeswoman, said. “We have to take his word for it.” Mamadou Toure, a spokesman for the party, said by text message that it’s “not true.”

Ouattara was sworn in as president in 2011 following almost a decade of political instability in the world’s biggest cocoa producer. The RHDP is facing rising competition from the Democratic Party of Ivory Coast, a former coalition partner whose leader, ex-President Henri Konan Bedie, supported Ouattara in exchange for fielding his preferred candidate in the 2020 vote. The two men joined forces in the second-round of 2010 elections to defeat then-President Laurent Gbagbo and kept the alliance intact through 2015. Bedie then decided to break with Ouattara last year.

After Ouattara initially said he wouldn’t seek re-election, he surprised many by telling the weekly Jeune Afrique last year that he was still deciding whether to run again, saying a constitution adopted in 2016 allows him to extend his time in office. Ivory Coast has a limit of two presidential terms.

Gbagbo, whose refusal to accept defeat in the 2010 vote triggered six-months of fighting that resulted in at least 3,000 deaths, was last week acquitted by the International Criminal Court in The Hague of committing crimes against humanity committed during the crisis. His release has been postponed pending a possible appeal by the prosecution.

Ivory Coast has witnessed leadership battles since the 1993 death of the West African nation’s first leader, Felix Houphouet-Boigny, who ruled with an iron grip for 33 years.

Ouattara’s first term saw record economic growth that averaged 9 per cent from 2012 to 2016. His second term has been roiled by a series of army mutinies and a general strike by civil servants over pension payments. Even so, the economy expanded 7.8 per cent in 2017 and was forecast to grow at least 7 per cent last year and this, according to the International Monetary Fund.