Iraqi government has captured key military positions outside the disputed city of Kirkuk from Kurdish fighters. The Kurds are a Northwestern Iranic ethnic group in the Middle East..

Iraqi government has captured key military positions outside the disputed city of Kirkuk from Kurdish fighters.

The Kurds are a Northwestern Iranic ethnic group in the Middle East. They have historically inhabited the mountainous areas to the South of Lake Van and Lake Urmia, a geographical area collectively referred to as Kurdistan. Most Kurds speak Northern Kurdish (Kurmanji) or Sorani, which both belong to the Kurdish languages.

Historically, the Kurdish region has seen a long list of invaders and conquerors. This includes ancient Persians from the east, Alexander the Great from the West. In the 7th Century Muslim Arabs invaded the region. In the 11th Century it was Seljuk Turks and it was the Ottoman Turks in the 16th Century. Most recently, in 2003, the United States invaded Iraq.

In recent decades, Kurds have increasingly influenced regional developments. There has been a movement within Turkey for autonomy. Kurdish troops have also played a vital role in fighting Islamic State (IS) jihadist group in Iraq and Syria.

The Kurds form about 20% of the Iraqi population. The region became autonomous after decades long political and military efforts for self-rule. In 2014, Iraqi Kurdistan President Massoud Barzani said that his government intended to hold a referendum on independence that year. However, there was a change in the main leadership in Iraq and this resulted in better relations. At the time, the referendum was called off. It caused an alarm in the neighboring states as they feared that their Kurdish population may also seek independence.

In 2014, Kurdish forces took control of oil-rich Kirkuk after the Iraqi army fled a major offensive by ISIS. Neither Iraq nor the local government of Kurdistan have been able to agree on who gets to control the area - and also benefit from its vast oil wealth. 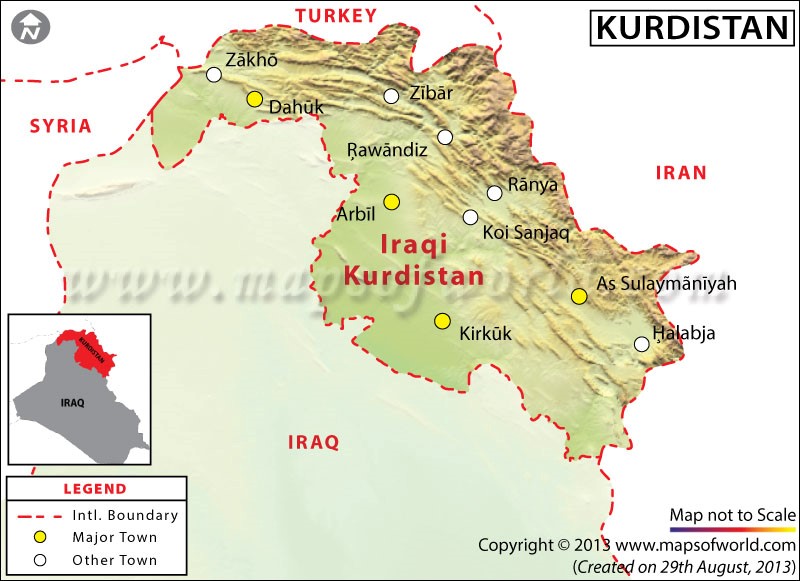 The Kurdish local government held a referendum for independence on September 25th. According to authorities, over 78% of the 5 million Kurdish population voted in the elections. More than 92% of voters in Iraqi Kurdistan have opted for independence. The referendum has been denounced not only by the Iraqi main government but also by Turkey and the UN.

"It is my constitutional duty to work for the benefit of the citizens, and to protect our national unity that came under threat of fragmentation as a result of the referendum that was organised by the Kurdish region," Abadi said. He added, “The referendum came at a time where the country is fighting against terrorism that has come in the form of ISIL. We tried to urge (the Kurds) not to violate the constitution and to focus on fighting ISIL, but they did not listen … They chose their personal interests over Iraq's interests. We are only performing our duty in keeping the city safe for Iraq's various factions. We urge all citizens to cooperate with our heroic armed forces … in implementing security in the area. We call on the Peshmerga forces to perform their duties under the central command of the Iraqi armed forces.”

The Iraqi army has now revealed that they have been able to capture key installations in the region. A military statement said units had taken control of the K1 military base, the Baba Gurgur oil and gas field, and a state-owned oil company's offices.

The Kurdistan Region Security Council said in their statement that the "Peshmerga will continue to defend Kurdistan, its people and interests. This was an unprovoked attack following days of Iraqi military deployments to Kurdistan's borders."

Peshmerga spokesman Brig Gen Bahzad Ahmed told the Associated Press that the fighting south of Kirkuk had caused "lots of casualties". Ahmed also has stated that homes have been burnt.

Thousands of residents in Kirkuk have fled the city as the violence escalated.

Our assessment is that the stand-off between the Kurdish Peshmegaras and the Iraqi forces does not bode well for the region. The Peshmegaras have been key in the fight against ISIS and any protracted dispute will weaken the coalition against ISIS.

We feel that the oil prices will continue to rise, dollar will move northward following a rise in US treasury bill. Oil prices have spiked on increased tension in Kirkuk. Iraq is one of the largest producer of Oil in the world and the Kurdish - controlled region in the north of the country produces significant proportion of Iraqi oil. Brent crude will most likely breach the $60 per barrel mark.