Iran has announced that it has successfully test launched a new-medium range missile. The Khoramshahr missile has a range of 2,000 km. United States and Iran do not have any..

Iran has announced that it has successfully test launched a new-medium range missile.

The Khoramshahr missile has a range of 2,000 km.

United States and Iran do not have any formal diplomatic relations or ties. The two nations share an acrimonious relationship.

US President Donald Trump has been extremely critical of the nuclear deal and has threatened to revoke it multiple times.

In July 2017, Iran announced that it had successfully tested a rocket that can deliver satellites into orbit. US imposed fresh sanctions against Iran at the time. Additionally, United States, France, Germany and Britain released a joint statement noting that Iran had violated a UN resolution that prevented it from conducting such tests. 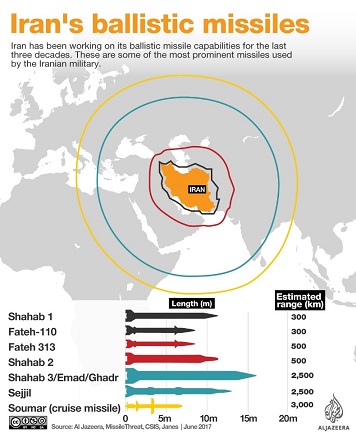 During his recent address to the UN General Assembly, Trump said, “The Iranian government masks a corrupt dictatorship behind the false guise of a democracy. It has turned a wealthy country, with a rich history and culture, into an economically depleted rogue state whose chief exports are violence, bloodshed, and chaos.”

Hassan Rouhani, the President of Iran shot back noting, “The ignorant, absurd and hateful rhetoric filled with ridiculously baseless allegations that was uttered before this august body was not only unfit to be heard at the United Nations.”

Shortly afterward, Iran announced that it had successfully tested a new-medium range missile. The missile in question is a Khoramshahr missile. It has a range of 2,000 km and it can carry multiple warheads. Given the missile’s range, it can easily reach Saudi Arabia or Israel if it were deployed.

Iran’s local television channel broadcast the launch. However, details are not currently available on where the test took place but it took place during a military parade. Rouhani struck a defiant note while speaking to reporters. He said, “We will promote our defensive and military power as much as we deem necessary. We seek no one's permission to defend our land. Whether you like it or not we are going to help Syria, Yemen and Palestine, and we will strengthen our missiles."

The United States and the UN are yet to respond to the launch.

Our assessment is the Iran sending a clear signal that they would develop their defensive and military power in a manner they deem fit. Iran has very clear geopolitical aspirations in the Persian Gulf. We feel that President Trump’s veiled threats on Iran would be counterproductive as reinforcing nuclear-related sanctions will lead Iran to end its compliance with the deal and revert to rapid Uranium enrichment.