Foreign Minister Zarif terms the US’s “addiction” to sanctions a disease and bemoans the landmark nuclear deal. In 2015, Iran agreed to a long-term deal on its nuclear programme with the P5+1 group of world powers - the US, UK, France, China, Russia and Germany. It came after years of tension over Iran's alleged efforts to develop...

In 2015, Iran agreed to a long-term deal on its nuclear programme with the P5+1 group of world powers - the US, UK, France, China, Russia and Germany. It came after years of tension over Iran's alleged efforts to develop a nuclear weapon. Under the accord, Iran agreed to limit its sensitive nuclear activities and allow international inspectors in the country, in return for the lifting of crippling economic sanctions.

President Trump has been openly critical of the agreed Joint Comprehensive Plan of Action (JCPOA), colloquially known as the ‘Iran deal’ and withdrew the US from the agreement in May 2018. In effect, sanctions were re-imposed on Iran by early August 2018, with both sides not willing to return to the negotiation table.

On August 16th, 2018 the US Department of State created the ‘Iran Action Group’ which is tasked with “changing the behaviour of the regime”. 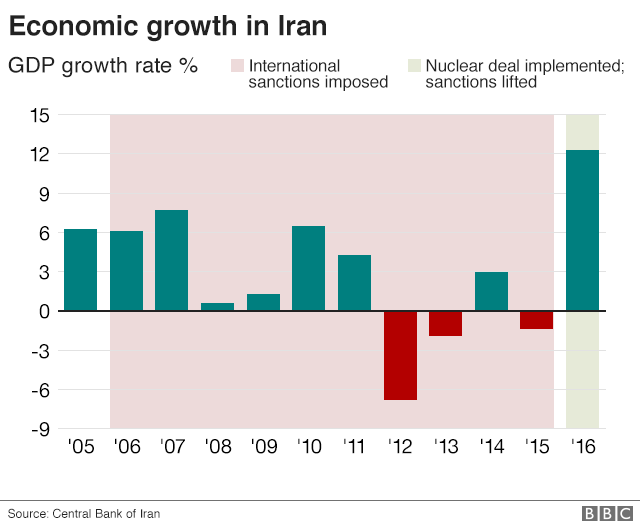 Read more about our extensive analysis on recent developments related to the US and Iran here, here and here.

Iranian Foreign Minister Javad Zarif said the US has a "disease" in that it's addicted to sanctions. Some of the American economic sanctions, suspended under the 2015 JCPOA (Joint Comprehensive Plan of Action) agreement in exchange for Iran curbing its nuclear program. But even before that, Zarif said, Washington's hands were itching to slap Tehran with economic penalties.

Foreign Minister Zarif chose not to spare even President Trump’s preceding administration, calling the Obama presidency adamant on keeping the sanctions on, despite popular beliefs. He then mused that signing the agreement might have been a mistake on Iran's part in the first place, made in the earnest belief that the US had wised up about the negative impact of sanctions have on Iran.

"That may have been one of the mistakes. But the problem was that we felt that the United States had learned that, at least as far as Iran is concerned, sanctions do produce economic hardship, but do not produce the political outcomes that they intended them to produce. I thought the Americans had learned that lesson. Unfortunately, I was wrong." The Iranian foreign minister was speaking on the 65th anniversary of a US-orchestrated coup that overthrew Iran's democratically elected prime minister in favour of a Shah's monarchic rule.

Just days before the anniversary, US Secretary of State Mike Pompeo announced the creation of the Iran Action Group to counter the Iranian government's "malign activity." The move was seen by many as a clear indication of intent to repeat the 1953 regime change.

Foreign Minister Zarif seems to be emboldened to directly accuse the US of being “addicted to sanctions” after the State department greenlit the creation of the “Iran Action Group”. On Monday, Iran's Supreme Leader Ayatollah Ali Khamenei, who has the final say in the country's most important political decisions, ruled out negotiations with the Trump administration. The prospect of negotiations in the near future looks bleak with the recent developments.

The US  has also stepped up criticism of Iran’s human rights record and is working with other nations to curb their imports of Iranian oil. The administration is warning Iran's oil customers that they will face U.S. sanctions in November unless they significantly reduce their imports with an eye on eliminating them entirely.

Our assessment is that Iran has effectively thrown down the gauntlet in the face of the latest round of sanctions. Foreign Minister Zarif’s latest tweet represents the frustrations of a minister in the face of crippling sanctions. The Iranian regime knows well these new sanctions will grind the country to a halt, and with the US threatening Iran’s oil customers, they are staring economic hardships in the face.