On May 8th, US President Donald Trump announced that the United States would be withdrawing from the 2015 Iran nuclear accord, and re-imposing sanctions on Tehran..

On May 8th, US President Donald Trump announced that the United States would be withdrawing from the 2015 Iran nuclear accord, and re-imposing sanctions on Tehran. These sanctions have the potential to affect a number of nations and companies dealing in Iran, including American-owned Boeing and France’s Airbus.

Iran’s nuclear program was first launched in the 1950s, with help from the United States. Iran signed the Nuclear Non-Proliferation Treaty in 1970. Support from the West continued until the Iranian Revolution and the ascent of Ayatollah Khomeini into power in 1979. Iran’s nuclear program has been a source of concern for the international community since then.

During the International Atomic Energy Agency’s (IAEA) investigations in the country, it was revealed that Iran had not declared a number of its nuclear activities and was not in compliance with the Non-Proliferation Treaty.  In 2006, the country also refused to suspend its uranium enrichment program. The United Nations consequently imposed a number of sanctions on the nation.

By 2015, the nation had lost billions of dollars due to these sanctions; an estimated $100 billion in oil revenue alone. It had also lost out on Foreign Direct Investment. In July 2015, Iran agreed to sign a nuclear agreement (the Joint Comprehensive Plan of Action or JCPOA) with major powers Britain, China, France, Germany, Russia, and the United States (the P5+1). According to the JCPOA, Iran would limit its nuclear ambitions in return for relief from a number of sanctions for at least 10 years. The IAEA declared that Iran had complied with the terms of the provisional agreement and sanctions were lifted in 2016.

There has been increasing criticism of the deal. US President Trump refused to certify Iran’s compliance with the deal in October 2017. Critics have cited three key defects in the JCPOA. The first is that the JCPOA does not address ballistic missiles. The second has to do with restrictions on the inspection of nuclear sites. The third is the “sunset clause”, which places a time limit of 10 years on the nuclear restrictions, after which they may begin to expire. While EU nations such as France and Germany have expressed support for the JCPOA, they have spoken in favour of curbing Iran’s ballistic missile program. 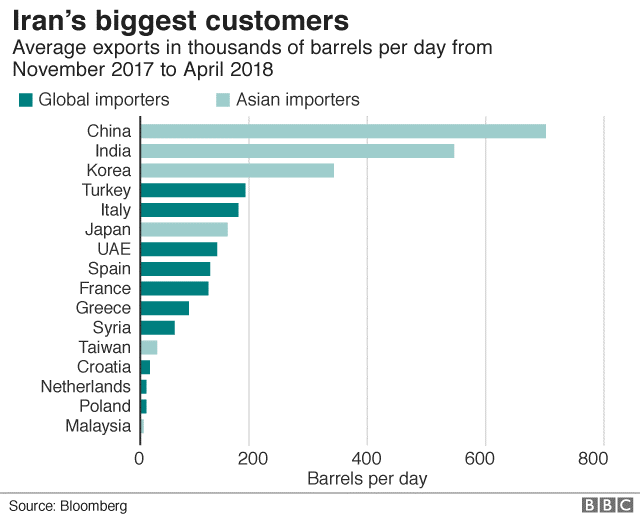 United States President Donald Trump announced that the US would be withdrawing from the JCPOA on May 8th. President Trump said that the deal was “decaying and rotten”. This move was taken against the advice of US allies such as France and Germany, whose leaders lobbied for the Trump administration to preserve the deal.

Iran has warned that it would not “remain in a deal that has no benefit”, and threatened to resume its uranium enrichment projects. Analysts have noted that US withdrawal from the JCPOA could have serious implications on domestic politics, undermining the moderate Rouhani regime and giving anti-West hardliners substantial leverage. The sanctions will also hit the country’s oil exports, and could prevent big businesses from investing. The Iranian Rial has already lost more than 22% of its value over the past year.

Washington’s decision to re-impose sanctions could have serious implications for European companies as well. Since 2015, trade between the EU and Iran has increased. In 2017, EU exports to Iran were worth $12.9 billion. European companies with interests in Iran include Airbus and ATR, who have signed deals to sell planes to Iran Air. Germany’s Siemens and Italy’s FS rail have entered partnerships for rail projects, France’s Renault has entered joint ventures in the country, and Volkswagen has resumed exports to Iran. BP is part of a joint venture to develop the Rhum gas field, and French company Total has signed a $5bn deal to develop the South Pars gas field.

This is significant as US National Security Advisor John Bolton has said that it is “possible” that that Washington will impose sanctions on European firms with trade links to Iran. US has already fined Standard Chartered, HSBC and Lloyds for processing Iranian transactions. American companies that could also be affected include Boeing, which is part of a $20 billion deal to supply 80 airplanes to Iran Air. Schlumberger and General Electric, who have interests in Iran’s energy industry, could be hurt as well.

India has said that it is “closely monitoring” the developments in Iran and is “assessing the implications” on Indian interests. India is the second-largest importer of oil from Iran, however, officials have said that it is too early to determine how the sanctions could affect the country. One significant impact for India is that oil prices could go up. Iran and Saudi Arabia also account for 40-45 percent of India’s basmati rice exports, according to rating agency ICRA. However, industry leaders have noted that rice is an essential food item for Iran, and may be left out of the sanctions.

Iran has indicated that it is willing to stay in the deal as long the other signatories maintain its terms. "We hope that with this visit to China and other countries we will be able to construct a clear future design for the comprehensive agreement," Iranian Foreign Minister Zarif said during a recent diplomatic visit to Beijing. Zarif is scheduled to meet British, French and German foreign ministers on May 15.

EU leaders have said that they will continue to abide by the JCPOA. Some believe that the EU could cite the “blocking statute” it previously used to lift sanctions on Cuba in 1996. The statute “blocks the application of foreign legislation and its effects in order to protect the economic interest of the Community.”

Washington’s move has received limited support, largely from Saudi Arabia, Israel, the UAE, and Bahrain. It has been noted that Iran's main trade partners are the United Arab Emirates and China, (23.6% and 22.3% of total trade respectively). Some analysts believe that US withdrawal could leave space for Russia and China to step up their presence in the region. King’s College London security fellow Dina Esfandiary said, “The more the United States (overreaches), the more other countries are going to look for ways to set up longstanding systems that U.S. sanctions would no longer be able to affect.”

China has recently announced a new rail connection to Iran. Following Trump’s announcement, Chinese Foreign Ministry spokesperson said that “the Chinese government is opposed to the imposition of unilateral sanctions and the so-called long-arm jurisdiction by any country.” Trade between Iran and China has more than doubled since 2006 to $28 billion in 2017. With less ties to US markets, Chinese corporations could be in more of a position to act against sanctions.

Our assessment is that while re-imposed US sanctions will impact the Iranian economy, it is possible that the JCPOA will survive without Washington as long as all other signatories remain committed. As stated previously, we feel that Trump’s stance may be intended to signal to Pyongyang that the US is firm on denuclearisation. However, withdrawal from the JCPOA may also result in a rift between Brussels and Washington, and may damage the trust between US and its European allies. This damage will be exacerbated if US imposes sanctions on European companies operating in Iran.

We believe that long-term sanctions could not only risk an escalation of conflict in the Middle East, they would also allow players such as Russia and China to step up their economic influence in the region.