Iran to block Strait of Hormuz

Iranian forces are expected to launch a major exercise in the strategic Strait of Hormuz likely aimed at demonstrating an ability to close the key oil shipping lane. The Persian Gulf is a body of water bordering Iran, Iraq, Kuwait, Saudi Arabia, Bahrain, Qatar, United Arab Emirates, and Oman..

Iranian forces are expected to launch a major exercise in the strategic Strait of Hormuz likely aimed at demonstrating an ability to close the key oil shipping lane.

The Persian Gulf is a body of water bordering Iran, Iraq, Kuwait, Saudi Arabia, Bahrain, Qatar, United Arab Emirates, and Oman. The Gulf covers an area of approximately 87,000 square miles, with a maximum depth of 330 feet and an average depth of 115 feet. The only maritime outlet from the Persian Gulf to the rest of the world is through a narrow chokepoint: the Strait of Hormuz.

The Strait of Hormuz is crucial not just to regional security, but also to the global economy. Tankers carrying about 17 million barrels of oil a day move through the strait, accounting for about one-third of all oil traded by sea globally.

Maritime traffic, including the US Navy, which goes through the Strait of Hormuz is in contact with Iranian naval forces, predominantly composed of the Iranian Regular Force Navy and the Iranian Revolutionary Guard Navy. Vessels enter through Iranian waters and exit the strait through Oman’s territorial waters.

On 27 December 2011, Iranian VP Mohammad-Reza Rahimi threatened to cut off oil supply from the Strait of Hormuz if oil exports are sanctioned. The dispute heightened after the European Union imposed sanctions on Iran’s oil sector in January 2012 in an attempt to deter their nuclear program. The issue was not revisited in political rhetoric until US backed out of the Iran Nuclear Deal and re-imposed sanctions on crude oil imports. Last month, the commander of the Al Quds Force in the Revolutionary Guards said Iran will block oil shipments through the Hormuz Strait if US President Donald Trump stops Iranian oil sales. The statement came in response to US plans to reduce Iranian oil imports across the world to “zero.” 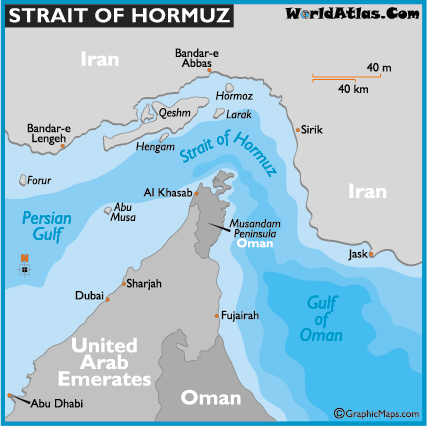 Iran's Islamic Revolutionary Guard is expected to soon begin a major naval exercise that could demonstrate its ability to shut down the Strait of Hormuz, a crucial conduit for global energy supplies, US officials say."We are aware of the increase in Iranian naval operations within the Arabian Gulf, Strait of Hormuz and Gulf of Oman. We are monitoring it closely, and will continue to work with our partners to ensure freedom of navigation and free flow of commerce in international waterways," said Capt. William Urban, chief spokesman for US Central Command.

While the US sees no immediate signs of hostile intent from Iran, the Islamic Revolutionary Guard's (IRGC) show of force has US military intelligence deeply concerned. They believe that the exercise in Persian Gulf could begin as soon the next two days. The cause of concern is due to three fundamental reasons. The timing is unusual as these types of IRGC exercises typically happen much later in the year. Moreover, the exercise that comes as rhetoric from the IRGC towards the US has accelerated in the recent past. It also appears the IRGC is ramping up for a larger exercise this year than similar efforts in the past.

Iran's latest warning follows signs that economic pressures are already taking their toll. The nation's currency, the rial, hit an all-time low against the U.S. dollar during the weekend. On Monday, U.S. President Trump said he'd be willing to talk to Rouhani without preconditions. Bahram Qasemi, a spokesman for the Iranian Foreign Ministry, said that was unlikely.

The US military has been trying to encourage other nations in the region, especially Saudi Arabia, to take a strong line on keeping the Gulf open in the face of rising Iranian rhetoric. They have also expressed concern about keeping open the waterways off Yemen where Iranian-backed rebels attacked oil tankers.

Abu Dhabi Crude Oil Pipeline is being fostered by the UAE to bypass the maritime route in the Persian Gulf. Along with the construction of this pipeline, the erection of a strategic oil reservoir at Fujairah was also envisaged to also maintain the flow of oil to the international market should the Persian Gulf be closed off.

Our assessment is that, the IRGC drill in the Hormuz Strait follows a new surge in tensions between the US and Iran. It comes amid efforts on the part of Iranian-backed Houthi rebels to block the equally vital Bab Al Mandeb Strait. We feel that oil prices can be expected to rise significantly in case there is a threat to the Strait of Hormuz. We believe that even though Iran has threatened to close the Strait multiple times in the past, these latest drills indicate Iran’s ability to make it unnavigable.