As the Russian invasion of Ukraine enters its third week, there are no signs of President Putin calling a halt, despite the escalatory nature of sanctions threatening an economic ruin for Russia. Similarly, the information war shows no sign of letting up.

The West has a definite edge in the information war as most popular media outlets are owned by American corporates, especially the Big Tech. Russia's only option is to block these portals for its citizens and bank upon overseas supporters and journalists on its payroll to continue the information battle on its behalf.

The first shot was fired, as expected, by the global social media giant Meta. It removed a network of about 40 pages, with followers on Instagram and Facebook, supporting the Russians. The reason quoted by Meta was that the network had be1en pushing fake news about the Russia-Ukraine invasion. The Russians allegedly run this network using AI-generated headshots as profile pictures and impersonating news editors, engineers, and authors. 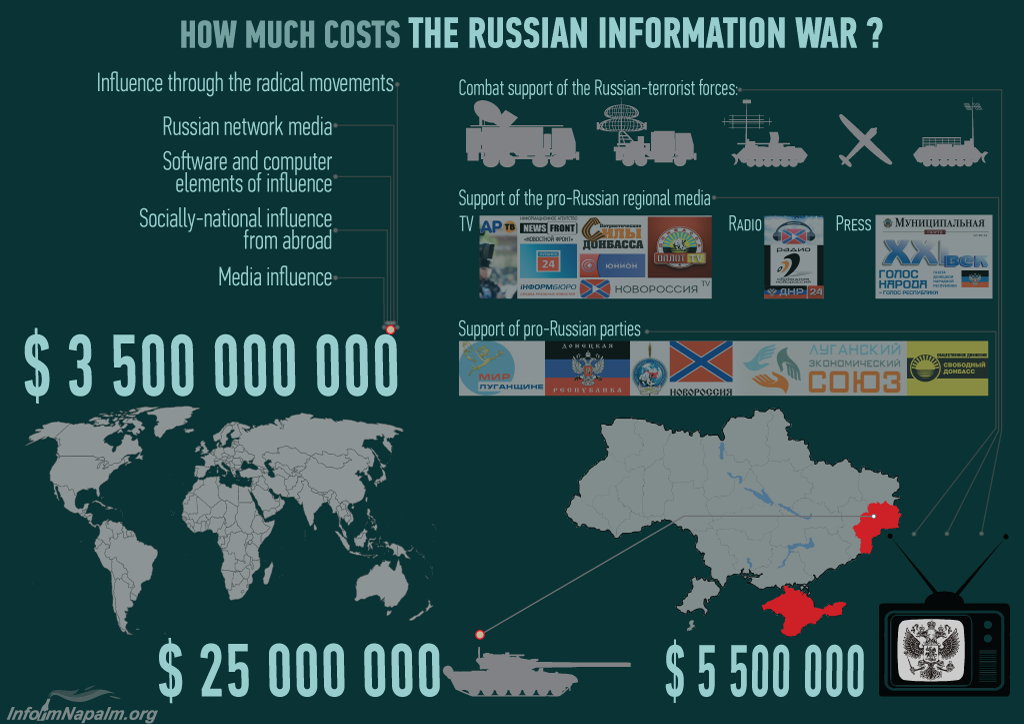 It is well established that social media is a powerful tool in distributing news and information. Its greatest strength is that individuals can go online and place their videos, thoughts and even news for global consumption. It gives people the power to capture and spread information in real-time.

Such a powerful medium can quickly be converted for spreading misinformation and disinformation by rival nations and their respective supporters in times of conflict to win the battle of perceptions. We have already witnessed how social media is used during more peaceful times, like elections, to influence opinions and win voters. While authoritarian states use social media as a propaganda weapon par excellence, even democracies like the U.S., UK and India are not above harnessing the incredible power of social media for furthering national interests even if it means 'manipulating' the truth. Not surprisingly, when the U.S. was being cajoled by the entente powers to join them in 1917, Senator Hiram Johnson, a staunch opponent of the U.S. joining the war, said, “The first casualty when war comes is Truth.”

Facebook, Twitter, Instagram, and Tik Tok are all platforms where people can get real-time information. Controlled by U.S. based/owned companies, they play a significant role in disseminating information, hopefully responsibly and correctly. However, companies like Facebook at times refuse to take responsibility for the authenticity of the information on their networks, leaving it to the viewers' discretion to separate the chaff from the wheat.

The ongoing conflict in Ukraine is a perfect example of this battle for thoughts and minds. As a classical ‘David vs Goliath’ struggle, the common man in the street, from Hong Kong to Honolulu, is riveted in the struggle of the Ukrainians against the mighty ‘Red Army.’ Social media is being bombarded with a constant stream of misinformation and disinformation from both sides. Ukrainian supporters have been accused of using video clips from Syria and other hot spots to showcase Russian excesses. The 'Snake Island" face-off between 13 Ukrainian soldiers and a Russian warship was the perfect example. It was claimed on social media that the Ukrainian soldiers had all sacrificed their lives rather than surrendered to overwhelming forces. Later, Russian social media retaliated by showing 81 surrendered Ukrainian soldiers from Snake Island enjoying their 'hospitality and friendship'.

On its part, Russia, too, has used social media extensively to further its national interests. According to Imran Ahmed, chief executive of the Centre for Countering Digital Hate, the entire justification for Russia to go to war with Ukraine was popularised on Facebook. Dr Boichak, lecturer in digital cultures at the University of Sydney, has claimed that Putin’s primary goal is to spread the notion that Ukraine is not a legitimate nation; his idea about Ukraine and Russia being one is a vast oversimplification of centuries of history. Putin is also trying to justify the war by claiming a genocide of ethnic Russian people in Ukraine without any evidence to back it up.

Not surprisingly, militarily weak but much more media savvy, Ukraine has been getting the better of a lumbering Russian bureaucratic propaganda machine. Nowhere is that dreaded Russian finesse to manipulate public opinion, as was being so loudly spoken about during the last two American presidential elections, visible in the current situation. Mr Mykhailo Fedorov, the Ukrainian minister of digital transformation, is on record claiming, "In 2022, modern technology is perhaps the best answer to tanks, multiple rocket launchers and missiles.” Ukraine has the support of the entire West and even their Asian partners to blank out Russia from social media very effectively, which has been achieved by getting social media giants Google, Facebook and Twitter on the same page. In fact, demands are being raised in the U.S. to sanction tech companies who continue to do business with Russia.

According to First draft, a non-profit group investigating misinformation and disinformation, some of the most inaccurate information about the war is being shared on Telegram and Twitter. Telegram proves to be extra challenging because of its closed nature. Interestingly, the conflict is being used to push all kinds of anti-establishment narratives. Russia has found itself a new ally in the U.S., the right-wing media. Most recently, the popular American news TV host - Tucker Carlson had claimed that the Democrats brainwashed the American public into thinking that Putin was a bad person. Similarly, Candace Ownes, a right-wing social media star, has told her viewers that this war is not Russia's fault.