Puerto Rico has reported at least 76 cases of suspected and confirmed leptospirosis, including many deaths, in the month after Hurricane Maria. Although dozens of..

Puerto Rico has reported at least 76 cases of suspected and confirmed leptospirosis, including many deaths, in the month after Hurricane Maria.

Although dozens of people are may be suffering from the bacterial disease, officials have denied to call it an epidemic or a confirmed outbreak. The disease is the result of contact with water that has been contaminated by animal urine. Puerto Rico averages 60 reported cases of leptospirosis each year. The 74 suspected cases have transpired since Hurricane Maria hit the island.

More than a month after Hurricane Maria tore through Puerto Rico on a path of destruction that spared no region, race or class, residents of the island have found their creativity stretched to the limit as they try to function without many amenities of the modern world.

Hurricane Maria is regarded as the worst natural disaster on record in Dominica, and caused catastrophic damage and a major humanitarian crisis in Puerto Rico. The tenth-most intense Atlantic hurricane on record. Maria was the thirteenth named storm, seventh consecutive hurricane, fourth major hurricane, and the second Category 5 hurricane of the unusually active 2017 Atlantic hurricane season.

At its peak, the hurricane caused catastrophic damage and numerous fatalities across the north-eastern Caribbean, compounding recovery efforts in the areas of the Leeward Islands already struck by Hurricane Irma just two weeks prior.

Maria was the third consecutive major hurricane to threaten the Leeward Islands in two weeks, after Irma made landfall in several of the islands two weeks prior and Hurricane Jose passed dangerously close bringing tropical storm force winds to Barbuda.

Leptospirosis is an infection caused by corkscrew-shaped bacteria called Leptospira. Signs and symptoms can range from none to mild such as headaches, muscle pains, and fevers; to severe with bleeding from the lungs or meningitis. If the infection causes the person to turn yellow, have kidney failure and bleeding, it is then known as Weil's disease. If it causes a lot of bleeding into the lungs then it is known as severe pulmonary haemorrhage syndrome.

Up to 13 different genetic types of Leptospira may cause disease in humans. It is transmitted by both wild and domestic animals. The most common animals that spread the disease are rodents. It is often transmitted by animal urine or by water or soil containing animal urine coming into contact with breaks in the skin, eyes, mouth, or nose. 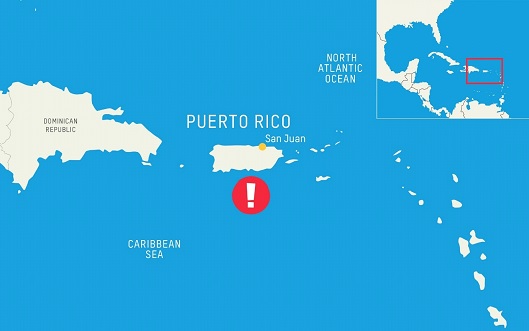 Spiral-shaped Leptospira bacteria, which are found in the urine of rodents and other animals, tend to spread after floods through drinking water or infection of open wounds. In serious cases, infection causes organ failure and can be fatal.

"This bacteria, like any other bacteria, can kill you," Dr. Deseda said.

According to the CDC, symptoms of leptospirosis are wide and varied but can include high fever, jaundice, red eyes and body pain. The CDC also states that some infected people may have no symptoms at all, a worrisome thought for those in Puerto Rico that have resorted to drinking contaminated water.

The time between a person’s exposure to contaminated water and becoming sick can range from two days to four weeks, leaving plenty of time for more cases to be reported over the next month or more.

The CDC states that leptospirosis can last for a few days or several months depending on treatment, yet people in Puerto Rico are dying from the infection.

The disease can be treated with penicillin or other antibiotics and through rehydration. A medical diagnosis is required to treat the disease effectively as many symptoms of leptospirosis are common in other illnesses.

Our assessment is that the water and electrical situations have compounded what’s being called a “slow-motion medical disaster.” Puerto Ricans now face a much higher risk of health problems related to a lack of access to electricity and clean water from dehydration to leptospirosis. People should try to avoid certain risks such as contact with animal urine or other body fluids, swimming or wading in waters contaminated with animal urine and avoid walking barefoot to reduce the exposure to contaminated soil and water.

Hurricane Maria on a warpath