PepsiCo Inc announced on Monday that Indra Nooyi would step down as CEO in October after a 12-year long tenure. The company has confirmed that the current President Ramon Laguarta will take the role of CEO. PepsiCo, Inc. is an American multinational food, snack, and beverage corporation..

PepsiCo Inc announced on Monday that Indra Nooyi would step down as CEO in October after a 12-year long tenure. The company has confirmed that the current President Ramon Laguarta will take the role of CEO.

PepsiCo, Inc. is an American multinational food, snack, and beverage corporation headquartered in New York. PepsiCo was formed in 1965 with the merger of the Pepsi-Cola Company and Frito-Lay, Inc. PepsiCo has since expanded from its namesake product Pepsi to a broader range of food and beverage brands. As of January 2012, 22 of PepsiCo's brands generated retail sales of more than $1 billion apiece, and the company's products were distributed across more than 200 countries. This resulted in annual net revenues of $43.3 billion. Based on net revenue, PepsiCo is the second largest food and beverage business in the world.

Indra Nooyi is an Indian American business executive and the Chairwoman and CEO of PepsiCo, the second largest food and beverage business in the world by net revenue. She has consistently ranked among the world's 100 most powerful women. In 2014, she was ranked at number 13 on the Forbes list of The World's 100 Most Powerful Women and was ranked the 2nd most powerful woman on the Fortune list in 2015.

Nooyi joined PepsiCo in 1994 and was named CFO in 2001. She was named President and CEO in 2006, replacing Steven Reinemund. Nooyi has directed the company's global strategy for more than a decade and led PepsiCo's restructuring, including the 1997 divestiture of Tricon, now known as Yum! Brands. Nooyi also took the lead in the acquisition of Tropicana in 1998, and the merger with Quaker Oats Company, which also brought Gatorade to PepsiCo. 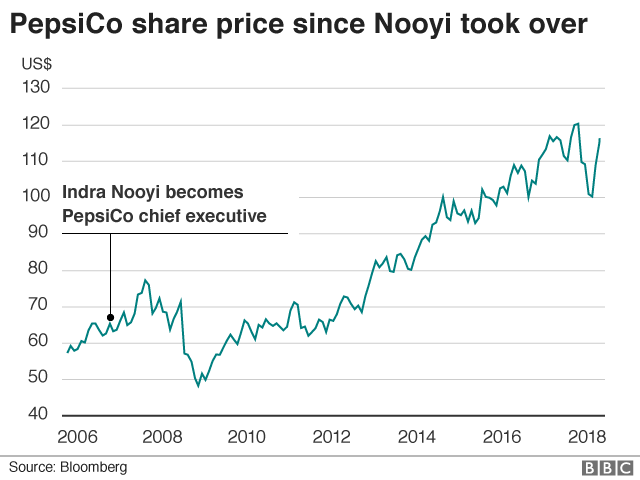 Indira Nooyi is stepping down as the CEO of PepsiCo in October, after 24 years with the company. "Leading PepsiCo has truly been the honour of my lifetime, and I'm incredibly proud of all we have done over the past 12 years to advance the interests not only of shareholders but all our stakeholders in the communities we serve," Nooyi said in a statement. The company has appointed Mr.Ramon Laguarta to take over as CEO.

Ms. Nooyi’s exit continues a recent trend of management turnover among major US food and beverage groups. Several companies including Coca-Cola, General Mills, Kellogg, Mondelez International, Hershey and Starbucks have all replaced their chief executives since the start of 2017.

As CEO for 12 years, Nooyi has boosted sales of the Mountain Dew and Gatorade maker to $63.5 billion, up by 80% from when she started. The company’s share price has risen 78% in the same period. During her tenure, Nooyi also saw off activist Nelson Peltz, who called for the company to be split into its beverage division and its successful snack arm, which includes Doritos and Lays chips. Thus, analysts believe that Nooyi’s departure from the company could invite calls for a separation once again. However, the company’s recent financial reports have been encouraging, indicating that changes in consumer tastes are here to stay.

Nooyi’s story has been an inspiration for business women around the globe. Sadly, her stepping down leaves the S&P 500 on track to have just 23 female CEOs, making it less than 5% of the total. It's not just that progress has stalled in getting more women into the top spot, it's regressing. Last year, there were 27 female CEOs in the index. With Nooyi’s exit, efforts to accommodate more women in the top jobs of the business world seem to be distressingly inadequate.

Following the announcement on Monday, Ms. Nooyi said, “Growing up in India, I never imagined I’d have the opportunity to lead an extraordinary company like PepsiCo.” Her success in the global stage has been ardently followed in India. “She was an absolute role model,” said Madhu Kannan, Uber’s chief business officer in India and former head of the BSE. “We looked up to her because she wore her Indianess with pride while running a global company. That was very inspirational.”

Roman Laguarta, who will take over from Nooyi, will be PepsiCo’s sixth CEO in its 53-year history. “Ramon Laguarta is exactly the right person to help build on @PepsiCo’s strong position and success. He has been a critical partner and friend and I am positive that he will take PepsiCo to new and greater heights in the years to come,” Nooyi tweeted on Monday. A 22-year veteran of PepsiCo, Laguarta oversaw global operations, corporate strategy, public policy and government affairs in his role as president.

Our assessment is that Indira Nooyi’s long-lasting impact as a global icon will be an inspirational example for women and entrepreneurs from the developing world. We believe that Mr. Laguarta is well-placed to continue executing on PepsiCo’s current strategy. We feel that his deep understanding of PepsiCo’s international operations, and a broader understanding of the total company portfolio in his role as president, will help him build on Nooyi’s legacy.