Indian economy and beyond

TheSynergia Foundation in collaboration with the Harvard Business School organized a round-table discussion on the topic ‘Budget & Beyond: What Next for Indian Economy?’ on March 16th 2018. The event was attended by luminaries who provided their expert insights on the subject. The objective was to bring together CEOs, businessmen, policymakers, economists and experts from various fields and get deeper insights on the Indian economy in the near future.

On February 1st 2018, Finance Minister Arun Jaitley presented India’s budget for the year 2018/2019. The focus of the budget this year was primarily agriculture, infrastructure and healthcare. The government has stated that it hopes to double farmer incomes by 2022 – the 75th year of India’s independence. In addition, it has also unveiled an ambitious new healthcare programme that aims to provide healthcare for around 500 million poor.

One of the key highlights of the budget was the new healthcare programme or “Modicare” as it has been dubbed. The government has stated that this will be the world’s largest state funded healthcare programme and that it will cover hospital expenses up to Rs. 5 lakh a year per family. The government will also establish 1.5 lakh Health and Wellness Centres under the Ayushman Bharat program.

India is a developing economy, the world's seventh-largest economy by nominal Gross Domestic Product. It is also the third largest economy in terms of Purchasing Power Parity (PPP). However, it ranks at 141 in per capita GDP (nominal). In June 2017, it was revealed that India’s economic growth had slowed to 6.1% in the fourth quarter ending March 2017 as compared with 7.1% in the previous quarter. 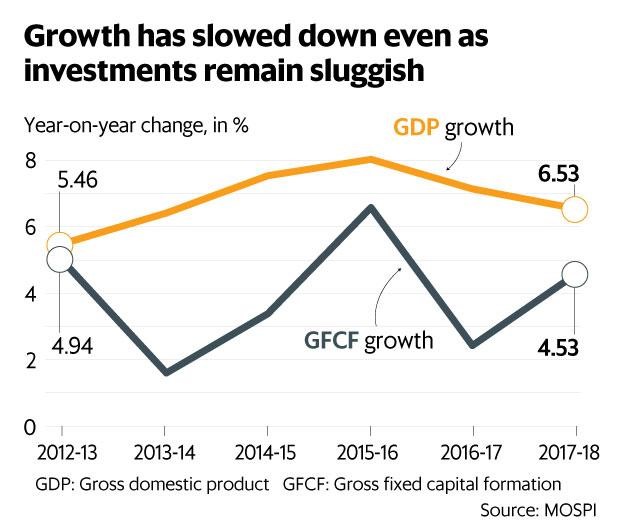 Some of the speakers for the discussion were: Dr. Charan Singh, RBI Chair, Professor of Economics, IIM Bangalore; Dr. Govinda Rao, Former Economic Advisory Council to the PM of India and Dr. Rajat Kathuria, Director and Chief Executive, Indian Council for Research on International Economic Relations.

The discussion brought to the fore key issues concerning India’s economic growth and its prospects for the future. Even though the Indian economy has stabilised since the twin policy shocks of demonetisation and GST, concerns remain regarding broader economic management. The volatility of oil prices, agricultural growth, the stock market bubble and hyper globalization are all factors that could affect the Indian economy.

Dr. Rajat Kathuria spoke about the rapid and robust growth of the Indian economy. He said that even though there was some evidence of “bottoming out”, largely the economy is slated to continue expanding. However, he warned that the growth also presented challenges. He pointed out that the growth that has taken place in the past few years has happened without creating job opportunities for the labour force especially with regards to “productive jobs.” He also noted that the rapid urbanization of India meant that many of its big cities were plagued by problems. People living in these cities have to deal with issues such as pollution and infrastructure as city management is lacking.

Dr. Govinda Rao sounded the alarm regarding Non-Performing Assets in India. He said NPAs have the power to paralyze the system of lending and borrowing, and yet the 2018 budget does little to address these problems. He also stated that there were concerns surrounding the funds allocated by the government for education and healthcare. He pointed out that healthcare is a state issue and wondered if the Union government discussed the healthcare rollout with state governments before presenting the budget. Ultimately, he argued that for India to develop, it will have to cater to its youth and focus on education and healthcare.

Dr. Charan Singh said that going “beyond the budget” meant that India has to come to terms with some of its vulnerabilities especially with relation to China. He hypothesized that India would have to develop foresight to map out an agenda for the future at least 20 years ahead. He also stated that while moving forward, India will have to consider four key questions: 1) What are we going to do about the growing labor force? 2) Where will we get resources to address problems like security. How can a nation like India compete with nations like China when it comes to areas like defense and economy? 3) What about technology? Defense technology will play a powerful role in days to come and we should be prepared for that. 4) What are we going to be with our neighbours? He noted that progress cannot happen in isolation and India’s ties with its neighbours will play a key role in its own development.

During the discussion, attendees also spoke about politics and wondered if politicians are more concerned about the elections rather than governance. Dr. Singh proposed three key solutions for some of the problems discussed. He wondered if the nation should do away with the Indian Institute of Management bodies and replace it with Indian Institute of Entrepreneurship. He also stated that agricultural universities should be replaced with micro enterprise universities with a high focus on research. He also noted that governing leaders should consider the kind of treaties signed by India and the role it would play in the nation’s development.

Our assessment is that the onus is on the government to ensure that the budgeted amount is spent so that the less fortunate are benefitted. We also believe that the government has to define a clear execution roadmap for the goals it has highlighted in the budget. It also has to be realistic about the resources at its disposal to kickstart some of the more ambitious projects.

With regards to the Indian economy, the nation must address urgent concerns like the NPAs and have the vision to plan ahead for the future.