In the first week of this month, the Indian Department of Telecom (DoT) released permissions for 5G trials. The selected network providers such as Sweden’s Ericsson, Finland’s Nokia, South Koreas Samsung, and State-owned C-DOT were asked to work with Indian mobile operators. Reliance Jio was accorded permission to conduct trials with its own 5G technology.

Conspicuous by their absence from the list were Chinese telecom giants Huawei and ZTE. Coming in the wake of the ban on Chinese apps imposed during the Ladakh border faceoff and growing allegations of cyber-attacks on Indian systems by Chinese hackers, the news did not come as a surprise. It only further substantiated the Indian government’s policy to reduce the Chinese footprint in developing its critical cybersphere. 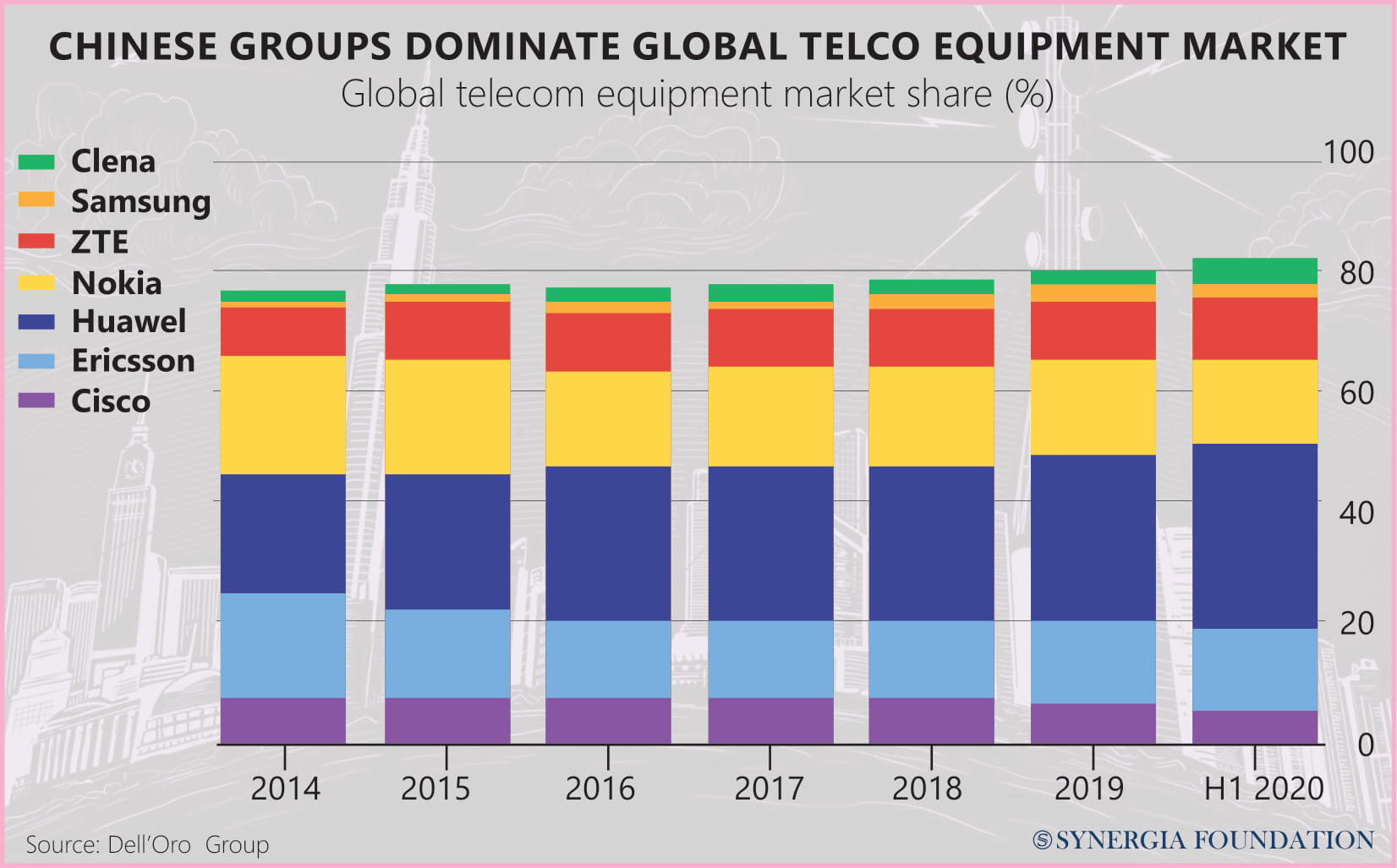 In this context, the Telecom infrastructure on which most of our digital atmosphere exists, has come under the intense scrutiny of the Indian government. 5G technology or fifth-generation mobile network is going to revolutionise the digital landscape as we know it. With a speed of almost 100 times that of existing 3G/4G technology, it will facilitate much larger data transfers, cyber intelligence, A.I., financial transactions, etc. It will also be much more efficient in connecting autonomous cars, smart cities, and smart industry. It is set to completely change and re-shape our economies, societies, defence mechanisms, and much more. Thus, it becomes imperative who and what interests are defining and controlling this game-changing technology.

With Huawei leading 5G technology, China aims to make almost 13 trillion dollars in new value globally by 2035. The only other companies which are in the same league are Nokia and Ericsson. China’s long-term thinking has given them an upper hand and a lead to market such disruptive technologies.

The common concern is that through these technologies, Beijing seeks strategic control of global supply chains. They range from critical raw materials up to semi-finalised products and, finally, worldwide installation and application of these new technologies. The Chinese fusion model of integrating civilian and military efforts for technological innovation makes sure that the government controls how the technology is used and sold.

With 5G technology, China and Huawei have proposed new standards for core network technology (called ‘I.P.’) at the U.N.’s International Telecommunication Union (ITU). They claim that current global networks are “unstable” and would be “vastly insufficient” for the future digital world they hope to build by 2030. These proposals have been perceived as a move by Beijing to seek control over the use of the internet on its citizens and also globally via U.N. institutions with the support of other like-minded nations.

Huawei is already viewed with suspicion. It has had accusations of breaching data privacy and thus threatening national security levied against it. In 2019, the U.S. Department of Commerce put Huawei on its ‘Entities List’ which identifies companies and individuals that the U.S. government deems a threat to national security. Since then, it has continued imposing sanctions on technological exports and imports to and from China, such as semiconductor chips, to halt and hamper its growth within the larger global economy. The U.S. is also coercing its allies to withhold technology or outright ban Huawei and its related services, citing a lack of data privacy and its ambiguous connection with the CPC (Communist Party of China). The EU has also expressed concern in enrolling Huawei for its 5G rollout. The UK government excluded Huawei from its 5G rollout in 2020 and has asked the company to remove existing equipment from the country by 2027. It seems that India has taken a leaf out of their book and taken the first step in the Indo-Pacific region by adopting a hard-line stance against China, at least in the technological dimension.

While a potential ‘digital de- coupling’ from China is desirable from a cybersecurity point of view, it begs the question of whether it would be economically viable. India’s cyberspace is relatively open, fluid and largely dependent on foreign funds and investments. The internet app-based start-up industry depends on a heavy influx of Chinese venture capital.

Even if the GOI bans another 100 China-based apps, it might not be enough to counter Chinese presence in the Indian Internet space. The heavy influx of Chinese funding, technology, and equipment needs to be regulated. Alibaba and Tencent were the major companies leading the way in flowing Chinese venture capital to India, totalling $4.3 billion between 2017 and 2020. Following the crackdown on China-based apps, the Indian government seeks to regulate Chinese and other foreign investment in the country. The introduction of a new law known as the ‘Consolidated FDI Policy’, announced in October 2020, forces countries that share a land border with India, such as China, to invest in India solely through government channels. Therefore, investments from China will be examined on a case-by-case basis by government agencies. This move may severely restrict the free flow of venture and other forms of capital into the Indian economy from China.

While this may be a huge step towards regulating Chinese money and income into its domestic economy, it is a devasting blow to the Indian start-up industry, which is heavily dependent upon FDIs. With hundreds of new start-ups being rolled out, there is a survival rate of less than a per cent, those being able to withstand the withering competition and make a profit.

Venture capital investments are extremely risky and need a continuous flow of capital and cheap equipment to sustain themselves. China provides both. In contrast, the western flow of capital into India’s domestic economy has always been towards established companies and private entities that ensure profit. Western investors tend to invest less as venture capital and target areas and business, generating high profit or royalties.

WAY OUT OF STALEMATE

One of the main reasons most free-market entities and states are irked with China is that it does not offer a reciprocal market. The fundamental principle of a global free market is the idea that one should have the freedom to mutually invest in each other’s domestic economies. Using their hold over private players and companies, the CPC government channelises the profit made from other markets towards their internal domestic infrastructure, thus ensuring that it sustains itself without foreign capital.

Considering the heavy pushback against Huawei technology in its most profitable markets, will the CPC offer levy in these restrictions? Or will they hand over more control over the technology to the buyers? Or can they incorporate cybersecurity mechanisms of other governments to build trust and ensure transparency? These are some questions which CPC need to answer.

Despite the LAC de-escalation announced by India and China, it is unlikely that diplomatic engagements will return to the 2019-2020 levels. However, India will continue to seek an interaction that rebalances a large trade deficit with China.

Limiting and regulating its investment, and presence, should also not be read as a complete rejection of Chinese financing in India. Such an outright distancing is not possible for the present situation. India’s existing 4G networks itself have trouble earning a profit, and even then, it relies heavily on Chinese equipment to sustain itself.