India, China and Russia have emerged as three nations whose geopolitical strengths are to be reckoned with in the global power structure. International theoreticians..

India, China and Russia have emerged as three nations whose geopolitical strengths are to be reckoned with in the global power structure.

International theoreticians sometimes note that triangular interactions between nations are quite simple. They would argue that the ancient adage – Enemy of my enemy is my friend. However, in the international reality of the triangle in question (India, China and Russia), everything is much more complicated and involves many nuanced factors.

Russia and India have shared strategic, military, economic and diplomatic relations for years. The Indo-Russian Intergovernmental Commission is one of the largest comprehensive governmental mechanisms that India has with any country. However, the 1960s was a testing time for the two, as Russia started getting closer to Pakistan. After the 1965 India-Pakistan war, Russia reduced its support to India on the Kashmir issue. Moreover, Russia's recent military exercises in Pakistan at the Khyber Pass in spite of the terrorist attack in Uri caused major dismay to India.

India’s contemporary relationship with China began in 1950. Between 1960 and 1987, India and China have been involved in three major military conflicts. A bilateral relationship has since been established yet both nations have often been pitted against one another as they are two of the fastest growing economies in the world. The two countries have never completely resolved their border problems and Chinese troops have reportedly infringed upon the Indian territory over the years.

China and Russia share a long land border demarcated in 1991, and they signed a Treaty of Good-Neighborliness and Friendly Cooperation in 2001. The two countries enjoy close partnerships in terms of military, economics and politics. They also support one another in numerous global issues. 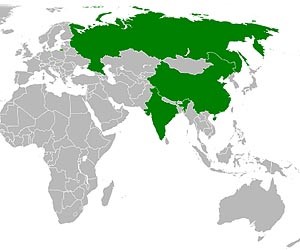 Mr. R.K Radhakrishnan shared his thoughts on the topic by stating that there is a consistency in foreign policy in that Russia has not been seen for a long time. He also reflected upon the changes we have been seeing due to recent political developments in the US. Mr. Radhakrishnan pointed out that on the Chinese front, the country has been making advancements to expand in new ways – citing the Doklam issue, and the Hambantota airport takeover by China in Sri Lanka. Commenting on what seems to be the strategic focus by China, the senior journalist pointed out that India would need to rethink their agenda in these circumstances. “You obviously need a different architecture to look at the Indo-Japan corridor”, he said, adding that it was good that Prime Minister Modi is attending the Shangri La Dialogue.

Alexander Nagorny began by stating that there is nothing more important than China- American relations because of reasons like ideologies, totalitarian state and so on tend to penetrate into political areas. China’s military policy to encircle China from different positions – would probably make the US explore relations between India and China to their advantage.

Coming to the triangular situation, he said that this situation developed in the 30s and 40s. He said that the Chinese Politburo is not unified and added that it was clear after the 19th Congress in China that there were two big groups striking a balance in China – one is of the Prime Minister who is America oriented and the other of the maritime provinces. However, Xi Jinping, he said, is thinking of longer perspectives. Speaking about the strategy of the One Belt One Road, Nagorny pointed out that this was China making a global proposal, not focusing on all the countries in the world, but at the countries which are situated on their borders. He stated that China does understand the importance of India and they should come to India again to talk about this issue.

Ambassador P.S. Raghavan admitted that the subject was vast, and proceeded to touch upon a few elements of the topic. He said the nature of the relationship between India and China would oscillate since both sides continued to play the games that seem advantageous to them. If you look at what is causing a certain degree of restraint in China, it is the element of unpredictability of the US economy, he said. He said since the annexation or accession of Crimea by Russia, there has been acrimony between Western countries and Russia. This has resulted in the strengthening of the Russia – China partnership; something of great concern to India is the level of military technology transfer that has taken place between these two countries, particularly over the last three years. “I think Europe and Asia need to ponder more about this Russia-China strategic axis,” said Mr. Raghavan. He said we are heading to an unimaginable situation in the region, because of the US – Russia standoff.

Our assessment is that the US-dominated unipolar world has rapidly eroded with its protracted and unproductive military adventures in Iraq and Afghanistan. In the emerging new world order, India, China, and Russia will play pivotal roles in global geopolitics. The relationship shared by these three nations with each other will also determine on how the global power structure will exist in the 21st century.