Tensions between India and Pakistan have continued to escalate since the Pulwama suicide bombing by a Kashmiri youth in Jammu and Kashmir, that killed 42 CRPF soldiers on February 14.

India and Pakistan have fought three wars since the countries were formed in 1947, after being granted independence from the British Empire. At the heart of the conflicts has been the disputed territory of Kashmir, which borders both nations and is divided into an Indian and Pakistani section. Both believe the region should be theirs completely. Pakistan's claim is based on the fact that the majority of the area's population is Muslim, while New Delhi claims ownership because, on partition, the region's then-ruler chose to join India. The sections are separated by one of the most heavily militarised borders in the world, known as the line of control (LoC), where there are frequent exchanges of artillery and small arms fire.

The population of the Indian-administered state of Jammu and Kashmir is more than 60% Muslim, making it the only state within India where Muslims are in the majority. Many people in the territory do not want it to be governed by India, preferring instead either independence or union with Pakistan. 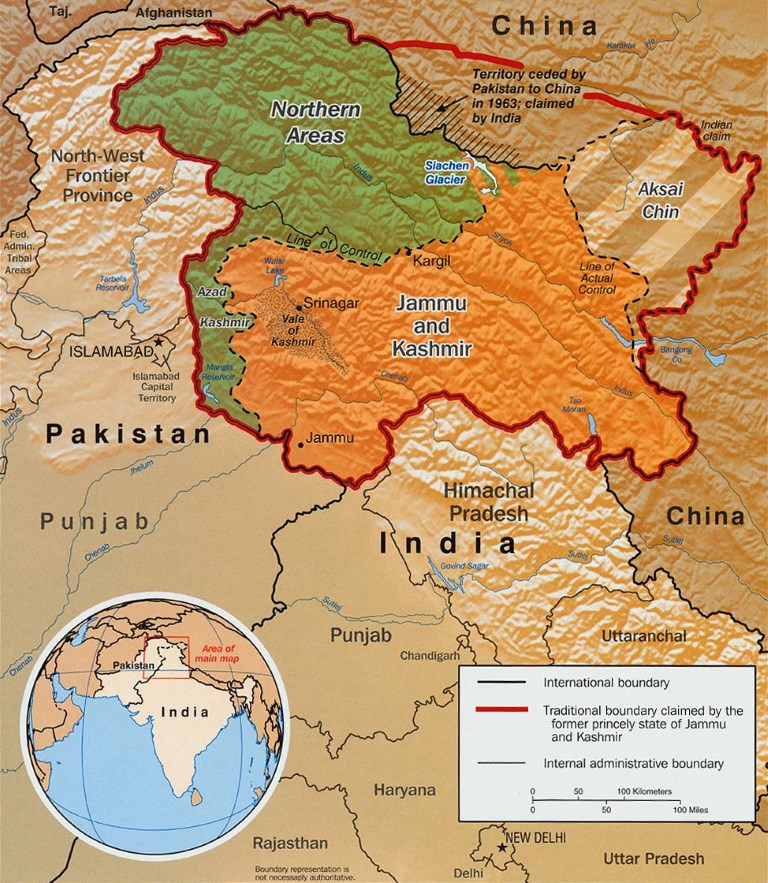 Two weeks after a Kashmiri carried out a suicide attack on a convoy of Indian security forces, killing 40 soldiers, the two countries have taken more aggressive action against each other. New Delhi, blaming Pakistan for the bombing, dispatched the Indian air force to strike what it believed was a terrorist training camp in Pakistan. Soon after, Islamabad said it had shot down two Indian jets and captured a pilot.

India's foreign secretary said the "non-military pre-emptive action" targeted a training camp for armed group Jaish-e-Mohammed (JeM), which had claimed responsibility for the deadly Kashmir attack. India accuses Pakistan of supporting JeM, one of a host of rebel groups fighting the Indian presence in Kashmir. Islamabad, which banned the JeM in 2002, denies the charge.  Founded in 2000, JeM is an armed group that has launched several high-profile attacks against Indian security and government targets, mostly in the disputed region of Kashmir.

"You accused the Pakistani government without providing any evidence, or saying what Pakistan stands to gain from this," Pakistan PM Imran Khan said in a recorded statement, adding that Islamabad was ready to cooperate with New Delhi on the Kashmir attack investigation. "If you have any actionable intelligence, give it to us, I guarantee that we will take action. And we will take action not because of [external] pressure, but because these people would be enemies of Pakistan. If anyone is acting from Pakistani soil, they are harming us."  Since taking office in August 2018, Pakistani Prime Minister Imran Khan has signalled a willingness to hold talks with Indian Prime Minister Narendra Modi to improve relations and resolve core issues including Kashmir.

Pakistan has blamed India for trying to weaken its international standing and isolate it, ahead of the Afghan peace talks, the FATF meeting and Kulbhushan Jadhav’s case hearing at the International Court of Justice, as well as the visit of the Saudi crown prince.

The Pentagon added to U.S. pressure for restraint by the foes, issuing a statement that said Acting U.S. Defence Secretary Patrick Shanahan is focused "on de-escalating tensions and urging both of the nations to avoid further military action. Chinese Foreign Ministry spokesman Lu Kang said "We hope that both India and Pakistan can exercise restraint, take initiatives that are conducive to promoting dialogue, meet halfway and make active efforts for lasting peace and stability in South Asia,"

In India, the dominant media sentiment appears to be that Pakistan needs to be taught a lesson for its support of terrorist groups. The government in New Delhi, facing an anxious public and an upcoming election next month, is compelled to act. BJP President Amit Shah said at the Ghazipur gathering that the prime minister has sent a “message to the world” that the current government would “go to any extent” to protect the country.

He added that the IAF strike was a measure of “self-defence. BJP’s Karnataka unit chief BS Yeddyurappa that the pre-emptive strikes launched by India against Jaish-e-Mohammed camp would help net his party more than 22 of the 28 Lok Sabha seats in the state in the upcoming general election. Political observers suggest that escalation suits BJP’s election prospects.

Our assessment is that the tensions have escalated xenophobic nationalism on either side of the border. Deception has become a shared objective. It can be noted that Pakistan has stated that it wants to resolve the problems with India through negotiations. We feel that adopting the path of warmongering is not in the interest of India or Pakistan.