India has jumped 30 spots and has been ranked 100 in World Ease of Doing Business index for 2018. This has been attributed to a series of reforms improving the..

India has jumped 30 spots and has been ranked 100 in World Ease of Doing Business index for 2018.

This has been attributed to a series of reforms improving the access to credit, power supplies and protection of minority investors.

India’s economy can be described as a developing economy. It is the world's seventh-largest economy by nominal Gross Domestic Product. It is also the third largest economy in terms of Purchasing Power Parity (PPP). However, it ranks at 141 in per capita GDP (nominal).

The Indian economy experienced a huge spurt in its growth rate in the 1990s. This has been attributed to abolishment of the License Raj system that had been in place from 1947 to 1990. Thus, India was able to achieve a growth rate of 6-7% annually. It became one of the fastest growing major economies in the world.  In June 2017, it was revealed that India’s economic growth had slowed to 6.1% in the fourth quarter ending March 2017 as compared with  7.1% in the previous quarter.

The economic slowdown has been attributed to the effects from demonetization and the roll out of GST. Between the months of April and June, it grew by 5.7%. This is a three-year low. 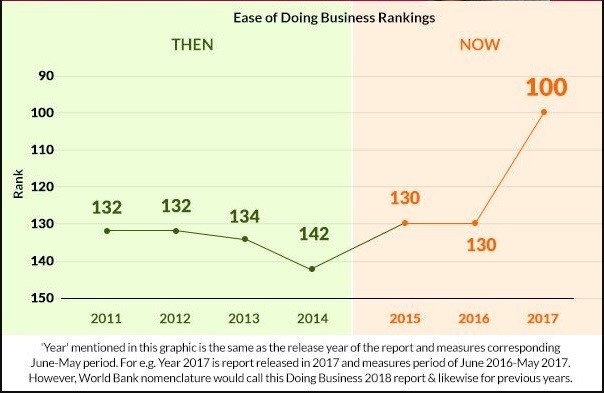 Every year, the World Bank releases its ranking in a report called Ease of Doing Business. The financial body uses various metrices and compares different economies. It analyzes how business friendly these nations are in terms of the kind of rules and regulations they have in place.  In its 2017 edition, the World bank placed India at 130th position out of 190 countries ranked. In the 2016 edition, India had been ranked 131.

The World Bank has placed India in the 100th position in the Ease of Doing Business 2018. India has jumped 30 spots. This is the best ranking it has received in this index thus far. The World Bank stated that India’s improvement in its ranking is a result of reforms in access to credit, power supplies and protection of minority investors.

“Today’s result is a very clear signal from India to the rest of the world that not only has the country been ready and open for business, as it has been for many decades, it is now competing as the preferred place to do business globally,” Annette Dixon, World Bank’s vice president for South Asia. Dixon said that the nation has strengthened its credit system and it now easier to secure construction permits. She added, ““Starting a business is now faster. This year’s remarkable results are the culmination of efforts that have taken place over the past three years, so you can extrapolate forward and see that steps that are taken this year may take 2-3 years to show up in the results,” Dixon said. 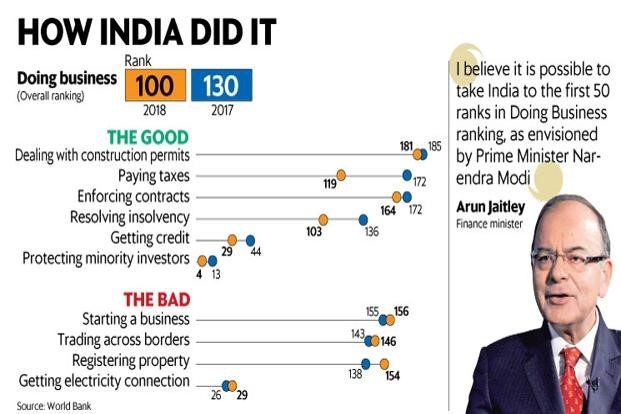 In 2017, the Indian government relaxed tax rules in connection to medium and small businesses. Finance Minister Arun Jaitley addressed the results of the index and said that the GST rollout will ultimately help India climb up the rankings stating, “Indirect tax reform (goods and services tax) had become law by June, but was implemented from July. We will get credit for it in future rankings. Evaluation for the ease of doing business ranking is very tough. The ranking does not reflect the reform measures unless the outcome is visible on the ground. In parameters such as doing business, dealing with construction permits, enforcing contracts and registering property where India is still lagging behind, there is reason to believe that we can improve our position significantly.”

India authorities have signalled that the nation will be introducing new reforms to ensure it is ranked in the 30th position by 2020.

Our assessment is that the improved ranking will bolster more investors and organizations to invest in India. There are, however, more reforms that need to be introduced to make it more business friendly. This includes improving the ease of trading across borders as well as land reforms.