In the latest Global Hunger Index (GHI) report, India was ranked 101 out of 116 countries. With a score of 27.5, it was one of the 31 countries in which hunger was identified as “serious”. What is of more significant concern is that there seems to be a downward trend in India’s rank since 2016. However, there have been debates over the latest GHI. Many experts note that India is not a “hungry” country, but instead, it is malnourished.

The Global Hunger Index (GHI) is a tool used to measure and track hunger on a global, national, and regional scale. The GHI report is published every year by Concern Worldwide and Welthungerhilfe. The GHI is split into three dimensions: inadequate food supply, child mortality, and child undernutrition and calculated using four indicators: undernourishment, child wasting, child stunting, and child mortality. 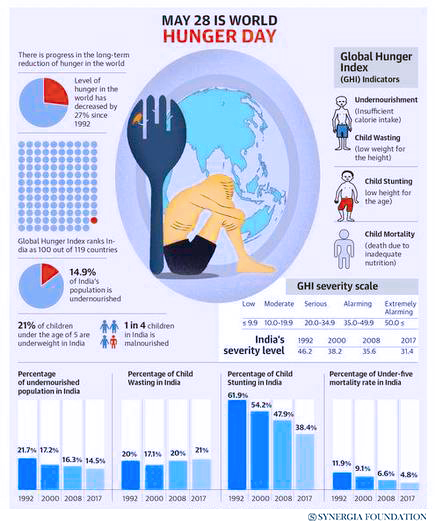 In 2020, India was ranked 94th out of 107 countries on the GHI scale. Now it has slipped to 101, triggering a political controversy. The central government has termed the methodology used by the GHI as ‘unscientific’ and claims that it does not accurately represent the ground reality.

Firstly, it is important to distinguish between hunger and malnutrition. According to the UN Food and Agriculture Organisation (UNFAO), hunger is defined as the “consumption of too few calories, to provide the minimum amount of dietary energy that a person requires to live a healthy life.” Malnutrition looks beyond calories; it looks at deficiencies in proteins, minerals, vitamins. It can occur due to a lack in quantity of food or a poor-quality diet.

According to the report, India’s numbers are 15.3 per cent undernourished, 17.3 per cent child wasting, 34.7 per cent child stunting, and child mortality of 3.4 per cent. These numbers reflect that malnutrition among children is a serious issue. However, what is stunning is the claim that over 15 per cent of our population is not even receiving the required calories.

The government has contested the report on four aspects. Firstly, the basic data itself is questionable as the undernourishment data that the UNFAO has provided was based on a telephonic poll. This claim was immediately disputed. “FAO's telephone-based indicator that includes information from a poll taken by Gallup – the Food Insecurity Experience Scale (FIES) – is NOT used in the GHI.”

Lastly, the Ministry has also stated that according to real-time data from POSHAN (Prime Minister's Overarching Scheme for Holistic Nourishment) portals, only 3.9 per cent of children served by government programs are undernourished. The publishers of the report have referred to the following sources for child undernourishment: 2021 edition of UNICEF, WHO, and World Bank Joint Child Malnutrition Estimates, which includes data from India’s Comprehensive National Nutrition Survey 2016–2018 (CNNS) National Report (published 2019).

The GHI has stated that its reports should not be used to make comparisons over time because they make changes to their methodology and their data sources. In 2015, the GHI had revised its methodology to include data and standardised the values of child wasting and stunting; this caused significant shifts in GHI scores for nations all around the globe.

The GHI also does not investigate the type of nutrients required, the levels at which they are consumed, environmental factors and water quality, all of which impact wasting, stunting, and child mortality.