India’s contemporary relationship with China began in 1950. Between 1960 and 1987, India and China have been involved in three major military conflicts. A bilateral relationship has since been established but both nations have often been pitted against one another as they are two of the fastest growing economies in the world. The two countries have never completely resolved their border problems and Chinese troops have reportedly infringed upon the Indian Territory over the years.

In June 2017, a skirmish broke out between Indian and Chinese troops at the Doklam plateau. Indian soldiers had intervened in the construction work being conducted by China in the region. The area is a disputed territory between Bhutan (an Indian ally) and China. For nearly three months both nations were engaged in a military stand-off. Another scuffle between Indian and Chinese troops broke out in August 2017. The two sides took to throwing stones at one another at Pangong Lake in Ladakh. Reportedly 15 Chinese soldiers had crossed into Indian territory and did not turn back despite repeated warnings.

By the end of August 2017, both sides announced that the stand-off had been called off. The Indian statement noted that both sides would withdraw troops but China had declared that its troops would continue to patrol the area. However, China has pulled back road construction equipment and bulldozers it had brought to the area.

In November 2017, China forcefully condemned Indian Defence Minister Nirmala Sitharaman’s visit to the Line of Actual Control in Arunachal Pradesh. China officially registered its concerns stating, “An Indian official going to a disputed region on the China- India border will perhaps make the issue even more complex and is not beneficial to efforts by both parties to maintain peace and tranquillity on the border.” 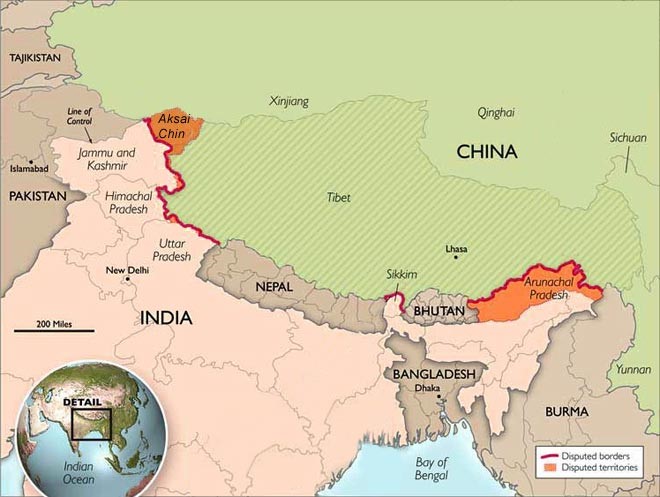 After months of tense ties between the two regions, Chinese President Xi Jinping and Indian Prime Minister Narendra Modi have agreed to improve relations. Indian authorities have confirmed that during a phone call, the two world leaders agreed to consult each other on regional and international issues.

“Prime Minister Narendra Modi made a telephone call today to Xi Jinping, President of the People’s Republic of China, to congratulate him on his re-election as the president,” a statement from the Indian foreign ministry said.

“The two leaders agreed that as two major powers growing rapidly, bilateral relations between India and China are vital for the realization of the 21st century as an ‘Asian Century’,” the statement said. “The two leaders also agreed to continue their close consultations on regional and international issues of mutual interest,” it added.

PM Modi has already indicated that he hopes to improve ties with China. In his message posted on his account on the Chinese social media platform Weibo, had said: "Dear President Xi Jinping, congratulations on getting re-elected as the President of the People's Republic of China. I look forward to working with you for further development of our bilateral relations.”

China’s state news agency Xinhua has also revealed that the country is open to a better relationship with India. The newspaper, which is considered a mouthpiece for the Chinese government, has noted that Beijing was willing to maintain a better two way cooperation between the two countries.

In recent weeks, India has taken specific steps to not disturb its balance with China. Recently, the country cancelled a rally that was being hosted by Tibetans. The rally was being organized in part by the Dalai Lama.

Our assessment is that this was largely a customary call between two leaders of neighbouring nations. However, it seems unlikely that India and China will be able to drastically improve upon their ties in the near future. China has been aggressive in trying to increase its global footprint and has repeatedly warned India regarding its borders.