Hurricane Maria on a warpath

Hurricane Maria, a Category 5 hurricane, has caused widespread devastation in Dominica. Is climate change to blame for the hurricanes hitting the Caribbean and US territories? ..

Is climate change to blame for the hurricanes hitting the Caribbean and US territories?

In the recent weeks, there have been two major hurricanes to hit America and the Caribbean region. The first one was 'Hurricane Harvey' which landed in costal Texas as a Category 4 hurricane on August 26, 2017. Thousands had to be evacuated as a result of the flooding. At least 70 people died due to the Hurricane Harvey.

On August 30th, one of the most powerful tropical cyclones to have been recorded over the Atlantic, Hurricane Irma made the landfall. By September 5, due to favorable conditions, the hurricane picked up steam and had become a Category 5 hurricane. Irma was able to sustain 185 mph (285 kmph) winds for more than 24 hours as a Category 5 hurricane. Irma has caused widespread devastation in the Caribbean with many of the Islands nearly destroyed as a result. The Associate Press has reported that at least 24 people died as the storm hit last week. 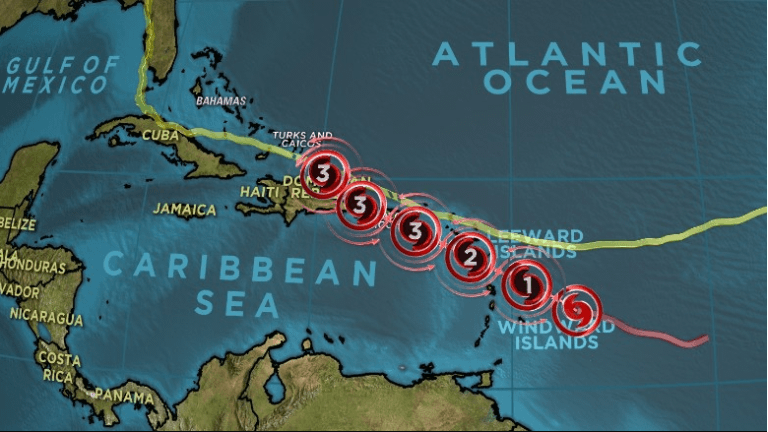 National Hurricane Center (NHC) has said that the wind speeds caused by the hurricane have reached a record of 160 miles per hour. The NHC said, “On the forecast track, the eye of Maria will move over the northeastern Caribbean Sea today, and approach the Virgin Islands and Puerto Rico tonight and Wednesday. It added that this hurricane would be "an extremely dangerous category 4 or 5 hurricane" as it bears down on the Virgin Islands and Puerto Rico.

According to Dominica authorities, the hurricane has caused devastating destruction across the region. Dominica Prime Minister Roosevelt Skerrit wrote on Facebook, “Initial reports are of widespread devastation. So far we have lost all what money can buy and replace. My greatest fear for the morning is that we will wake to news of serious physical injury and possible deaths as a result of likely landslides triggered by persistent rains."

Our assessment is that the unusual activity across the Atlantic proves that climate change is no longer a threat in the future. It poses a clear and present danger to millions of lives. The Paris Climate Agreement is more important than ever. Additionally, there is an urgent need for studies to decipher how the warming of the planet may have impacted Harvey, Irma, Jose and Maria.