Increased terror activity as well as the prevailing problem of hunger will soon push Burkina Faso into a full-fledged “humanitarian crisis.” Just weeks earlier, coordinated twin attacks resulted in the death of eight people in the region.

Burkina Faso is a country in West Africa. Previously a French colony, it gained independence in 1960. Despite having large reserves of gold, the region is extremely poor. It is bordered by six countries: Mali to the north, Niger to the east, Benin to the southeast, Togo and Ghana to the south, and the Ivory Coast to the southwest. Burkina Faso has a population of approximately 20 million, of which 90% is engaged in subsistence farming. Cotton is the main cash crop. Agriculture is highly dependent on rainfall and there are frequent droughts in the nation. However, the country has seen an increase in growth in recent years, due to improving gold production. In 2017, the GDP grew 6.4%.

An unstable region, Burkina Faso has witnessed numerous military coups. Previously called “Republic of Upper Volta”, the nation was renamed "Burkina Faso" in 1984 by then-President Thomas Sankara. Blaise Compaoré seized power from Sankara but was also ousted in 2014 through to an uprising. The country saw a failed coup in September 2015. The current President Roch Marc Christian Kabore was elected in October.

There has been an uptake in terror attacks by Islamist militants. In January 2016, militants targeted a hotel, resulting in the death of over 30 people; in December, 12 soldiers were killed in another attack. In March 2017, two separate incidents were carried out by Islamist militants. In August 2017, assailants opened fire on a restaurant popular with tourists, wounding 8 and killing 20. Kidnappings are common. According to UNICEF, militants have an ongoing campaign against schools and teachers in the region.

The two key groups thought to be responsible for terrorist activity in Burkina Faso are al-Mulathamun Battalion, and al-Quaida in the Islamic Maghreb (AQIM). Movement for Oneness and Jihad in West Africa (MOJWA), and Boko Haram are active in neighbouring countries. Burkina Faso also faces some issues with its neighbours over illicit cross-border activities, particularly Mali. Burkina Faso is adversely affected by the political instability of its neighbours. 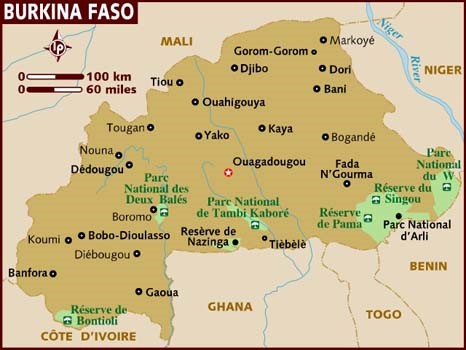 On the 2nd of March, the West African country witnessed gunmen opening fire in the capital city Ouagadougou. The attackers targeted the French Embassy, and army headquarters, where a regional anti-terrorism meeting was scheduled to take place. The French foreign minister, Jean-Yves Le Drian confirmed that the French embassy was a target. However, there were no French casualties. He expressed France’s “determination to fight unforgivingly against these terrorists who want to destabilize the Sahel”. “They targeted France, which is linked to Burkina Faso in its fight against terrorism,” he added.  The French Ministry of Justice has reportedly commenced an investigation into the issue.

The twin attacks resulted in the death of at least eight people and left many injured. This was the third major assault on Ouagadougou in the past two years. Previous attacks have been carried out by al Qaeda allies in the region. France has a military presence in Burkina Faso as part of Operation Barkhane, which was launched in 2014 to combat jihadist activity across the Sahel region.

Aid agencies have now signalled a warning, stating that hunger as well as increased violence in the region is pushing Burkina Faso into a humanitarian crisis. “There is no optimistic scenario,” Christian Munezero, head of mission for the International Committee of the Red Cross (ICRC), told the Thomson Reuters Foundation. According to estimates, at least one million people in the region will require food aid to sustain themselves in the coming months.

“I think this population has a pretty strong capacity for resilience, which would have allowed them in one way or another to cope with the climate shock, if there weren’t this additional factor of insecurity,” said Munezero.

Thousands of citizens from the region have fled in hopes of leaving behind the violence and the instability. In addition, Munezero has confirmed that multiple clinics have also shut down as a result of the exodus.

Our assessment is that Burkina Faso is quickly imploding into an unstable region as terror activities continue to escalate. Up until now, the country was considered a key ally against the al Qaeda by the French government. Meanwhile, millions living in the country will have to deal with dwindling resources and poor healthcare as the crisis continues. The French government has to work with the regional government to address these problems before another humanitarian crisis crops up in Africa.