A new study published in the Proceedings of the National Academy of Sciences has revealed that the plague infamously dubbed as Black Death was not spread primarily by rodents..

A new study published in the Proceedings of the National Academy of Sciences has revealed that the plague infamously dubbed as Black Death was not spread primarily by rodents but rather due to human parasites such as fleas and lice.

The Black Death is one of the most devastating pandemics in human history. It spread around 14th century and resulted in the deaths of millions in Europe.

Plague is an infectious disease caused by the bacterium Yersinia pestis. Symptoms include fever, weakness and headache. Usually this begins one to seven days after exposure. The common types of plague are: Bubonic plague, septicemic plague, pneumonic plague.

The Black Death arrived in Europe by sea in October 1347 when 12 Genoese trading ships docked at the Sicilian port of Messina after a long journey through the Black Sea. Even today it is considered one of the most devastating pandemics in human history. It is said to have originated in Central Asia and travelled through the Silk Road and reached Crimea by 1334. Historians then have assumed that from here, the plague virus was carried by Oriental rat fleas and thus spread it across the Mediterranean and Europe when they boarded in merchant ships.

Overall, the Black Death, is said to have been responsible for the deaths of 30-60% of human population in Europe during this period. Some estimates note that somewhere between 75 to 200 million people fell victim to this plague. The world population as a whole did not recover to pre-plague levels until the 17th century. The plague did not completely die out for a few centuries. There have been accounts of outbreaks occurring in Europe until the 19th century.

The plague was so devastating that it created a series of religious, social, and economic upheavals, which had profound effects on the course of European history. In total, the plague may have reduced the world population from an estimated 450 million down to 350–375 million in the 14th century.

In modern times, the spreading of any type of plague is tightly controlled through government intervention and medical breakthroughs. Globally about 600 cases are reported a year. In 2017 the countries with the most cases include the Democratic Republic of the Congo, Madagascar and Peru. In the United States infections usually occur in rural areas. The World Health Organization notes that between 2010 to 2015 there were 3,248 cases reported worldwide. In that same period 584 died from these reported cases. 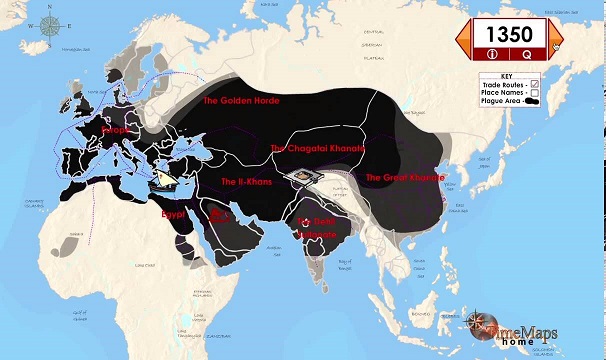 For long rats and their fleas have been identified as the main carriers of the Black Death and were said to be responsible for its spread especially in Europe. However, a new study has revealed that rodents are not to blame for one of the most devastating pandemics in history. In fact, according to a study published recently in the Proceedings of the National Academy of Sciences, the reason is due to lice and fleas and not rodents.

The research was led by a team from the universities of Oslo and Ferrara. Researchers have stated that the spread can be "largely ascribed to human fleas and body lice". "We have good mortality data from outbreaks in nine cities in Europe," Prof Nils Stenseth, from the University of Oslo, told BBC News. "So, we could construct models of the disease dynamics [there]."

The scientists generated a list of plague characteristics based upon contemporary field observations, experimental data or best estimates. The team then simulated disease outbreaks in the cities of Europe and created three specific models. One model checked in what way the disease was spread by rats; the second model checked for airborne transmission and the third model revolved around human parasites (fleas and lice).

Professor Stenseth and his team thus concluded, “"The conclusion was very clear. The lice model fits best. It would be unlikely to spread as fast as it did if it was transmitted by rats. It would have to go through this extra loop of the rats, rather than being spread from person to person.” Stenseth adding that "understanding as much as possible about what goes on during an epidemic is always good if you are to reduce mortality [in the future]".

Our assessment is that there are key lessons to be learnt from the past. In this case, a better understanding on the real cause for the spread of Black Death would help mankind from such a pandemic from ever taking place. The plague, while controlled, has still not been entirely eradicated. The current research proves that better hygienic conditions should be promoted among human beings, after all it was human parasites that resulted in the plague spreading in the first place.