Holding All the Cards

As the world continues to reel from a dearth of semiconductors, it has become extremely vital to secure supply chains from geopolitical risks and natural disasters. While the Covid-19 pandemic may have exacerbated the demand-supply imbalance in chips, the signs of an impending crisis had appeared long before the pandemic. Apart from negative variables like the U.S.-China trade war, the concentration of advanced manufacturing capabilities in the hands of a few players had significantly constricted the entire value chain.

To build resilience in the future, it will be important to identify and mitigate potential disruptions to the semiconductor industry. More broadly, there is a pressing need to look beyond microchips and anticipate threat factors for the electronics industry and other allied sectors.

Meanwhile, the Netherlands-based ASML Holding enjoys a virtual monopoly on advanced photolithography equipment, which is used to print chips onto a semiconductor substrate. Similarly, American companies like Synopsis and Cadence Design Systems reign supreme in electronic design automation software. Unless these existing supply chains are diversified across multiple players, they will remain vulnerable to single-point failures.

Acknowledging this, industries around the world have urged their respective governments to build capacity in strategic sectors like semiconductor chips, photovoltaic cells, and lithium-ion batteries. Owing to their sophisticated nature, however, this will not happen overnight. It will require substantial planning and investment, apart from a well-coordinated rollout. In the meantime, identifying potential disruptors and evolving mitigating strategies can be the first step in countering supply chain bottlenecks. 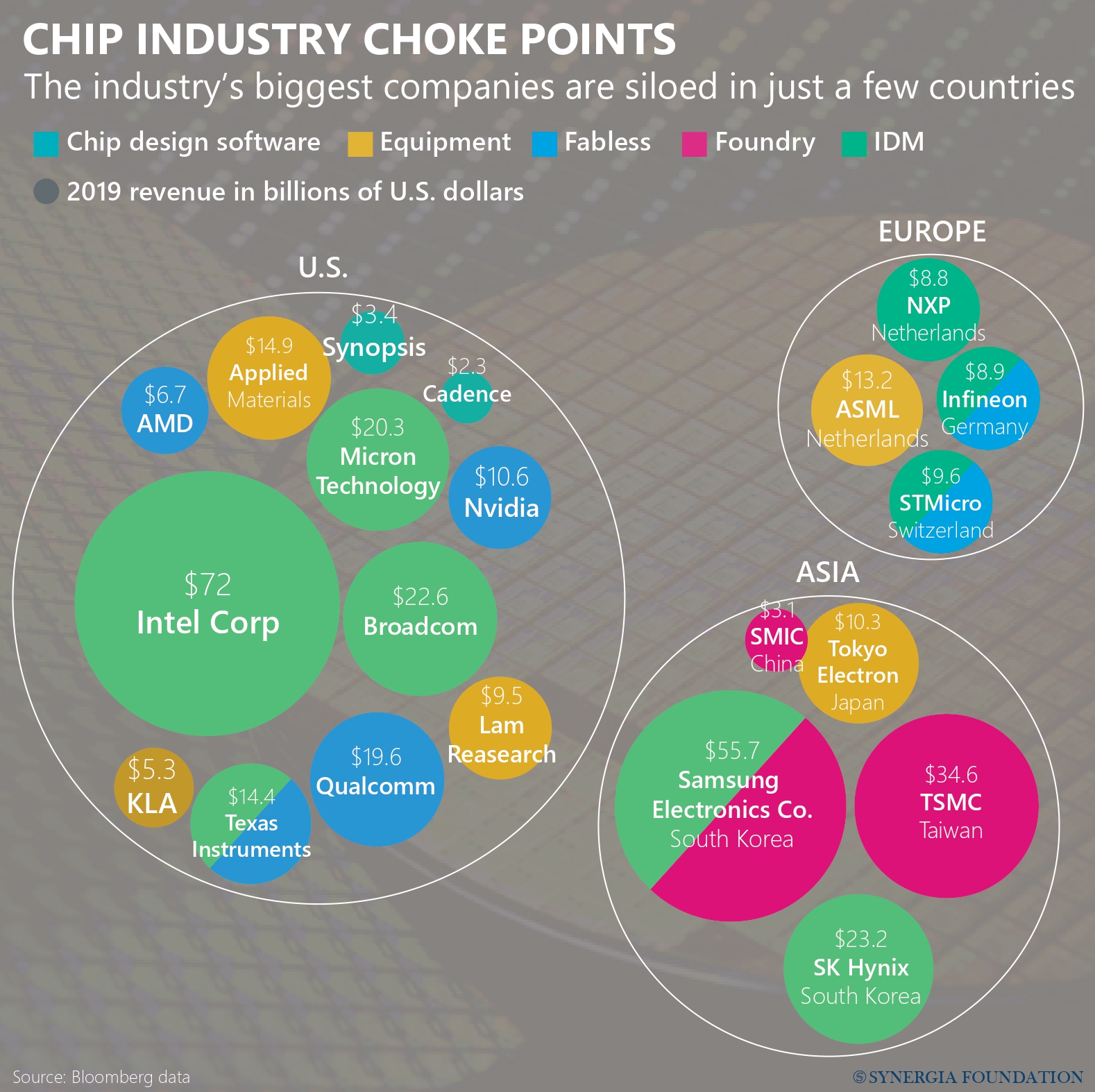 Silicon is an integral part of several electronic applications, including integrated circuits or microchips. This metallically lustrous metalloid element is used to manufacture wafers that are eventually deployed in smartphones, notebooks, desktops, industrial products and other electronic equipment.

Currently, China dominates the supply of silicon, with a production volume estimated at 5.4 million metric tons in 2020. The Xinjiang-based Hoshine Silicon IndustryXinjiang-based Hoshine Silicon Industry and its subsidiaries are the world’s largest producer of silicon metal. There is also intense competition among various silicon production zones in the country, which is actively encouraged by the government to amplify the national output of this strategic metal.

As the global demand for wafers escalates at an unprecedented rate, China’s pre-eminence in silicon production puts it in a strategically enviable position. It can stockpile essential raw materials for its own semiconductor industry, putting international manufacturers at a significant disadvantage. Supplies can also be squeezed at an opportune moment to extract geostrategic concessions.

During the Trump Presidency, the U.S. had finally woken up to this threat. It promptly imposed tariffs on silicon and other raw materials imported from China to encourage domestic production. More recently, the Biden administration banned silica-based products from the Hoshine Silicon Industry. Although this was officially justified as a measure to counter the use of forced labour practices by the company, it had the added advantage of discouraging American companies from relying on raw material sources in China.

Such incidents hold a valuable lesson for India, as it aspires to build commercial fab capacity in the future. To ensure robust supply chains, the country will need to diversify its procurement of electronic-grade silicon.

Besides semiconductors, China's strategic hold over the supply of silicon can have implications for renewables, especially in the solar sector. As can be recalled, polycrystalline silicon is most commonly employed in the production of photovoltaic cells that convert solar energy into electricity. In fact, a report by the Sheffield Hallam University claims that 95 per cent of solar modules rely on polysilicon as their primary material.

With ‘net-zero’ deadlines spurring the installation of solar panels globally, there will be a proportionate increase in the demand for such polysilicon. Here again, the Dragon has stolen a march on other countries by substantially investing in polysilicon research and production. Local governments have also wooed start-ups by offering free land and no-tax incentives.

As a result, four of the world’s five largest polysilicon manufacturers today are based in China, as per a study by the German firm Bernreuter Research. This near-singular dependence on China can render the solar industry vulnerable to supply chain bottlenecks and price variations. This was amply demonstrated in 2017, when polysilicon prices spiked by almost 35 per cent after environmental regulators shut down factories in China.

Given that the country accounts for nearly 70% of the global production capacity today, similar disruptions can be expected in the future. Beijing also dominates other aspects of photovoltaic technology, including the supply of components. In this context, it is important for countries around the world to expand their sources of polysilicon and other raw materials, as they embark on their clean energy missions.

Building resilience in sectors like semiconductors or solar energy will have little meaning if energy storage devices are constrained by supply chain disruptions. As industries and transport infrastructure transition to an ‘electric future’, batteries will play a critical role in their success. In this veritable milieu, lithium-ion (Li-ion) batteries have emerged as a primary power source for portable electronics. With global automakers rapidly adding electric vehicles to their portfolio, the demand for such lithium-ion batteries is expected to surge to as much as 5.9 terawatt-hours a year by 2030.

As far as raw materials are concerned, the country controls the processing of almost all critical minerals, whether it is lithium, cobalt, rare earth, or graphite. In fact, it produces more than 60 per cent of the world’s graphite, allowing it to dictate world prices. Although the country does not have natural reserves of cobalt, it has secured exclusive access to mines in countries like the Democratic Republic of Congo(DRC).

In fact, a working paper published by the Organisation for Economic Co-operation and Development(OECD) suggests that eight of the 14 largest cobalt mines in the DRC are owned by the Chinese, accounting for almost half of the country’s output. Similarly, the country has bought stakes in mining operations across Australia and South America to supplement its own reserves of lithium.

Mary Kavita Dominic is a Policy Research Associate with the Synergia Foundation.