Smt Draupadi Murmu, 64, became the first President to be born in an independent India and the first from the tribal community. She is additionally the second woman to carry the nation's highest post.

After a day-long counting of the MPs' and MLAs' ballots, which form the electoral college, Smt Murmu defeated her rival, Shri Yashwant Sinha, by a landslide winning over 64 per cent of legitimate votes. Smt Murmu will succeed the current incumbent, President Ram Nath Kovind as the republic’s 15th president.

Smt Murmu is a member of the Santhal community, one of the most important tribal groups in India. She was born in the tiny hamlet of Baidaposi of the backward Mayurbhanj district in 1958. Being the daughter of the local council president, she attended the Ramadevi Women's College within the metropolis of Bhubaneswar.

While visiting the neighbouring town of Rairangpur to attend a meeting in honour of then Odisha executive director Kartik Majhi, young Draupadi boldly walked up to the stage, holding her diploma, and told the minister that she wished to attend Bhubaneswar University. Moved by her enthusiasm, the minister asked his staff to help the child in enrolling at a government school within the state's capital.

Ms. Murmu began her career as a clerk within the irrigation and energy division of the Odisha government, where she worked as a junior assistant from 1979 to 1983.

She returned to Rairangpur to care for her in-laws after resigning from her government job, working as an educator at the local Sri Aurobindo Integral School.

Her political career got a boost when she was chosen as a counsellor in the Rairangpur local elections in 1997. During her tenure, she took up the task of improving the town's sanitation, standing in the sun and personally supervising the local contractors cleaning the garbage and soil clogged drains. So, it was no surprise that she won the Rairangpur seat within the state assembly twice as a BJP member in 2000 and 2009 and served as a minister from 2000 until 2004.

She has been fighting for tribal rights throughout her political career and was the President of BJPs, the state branch for scheduled tribes, from 2006 to 2009. Despite twice suffering personal tragedies, in which she lost her spouse and two children, she has continued to strive in the demanding political arena, being rewarded with the constitutional appointment of the Governor of Jharkhand in 2015, a state with a significant tribal population. 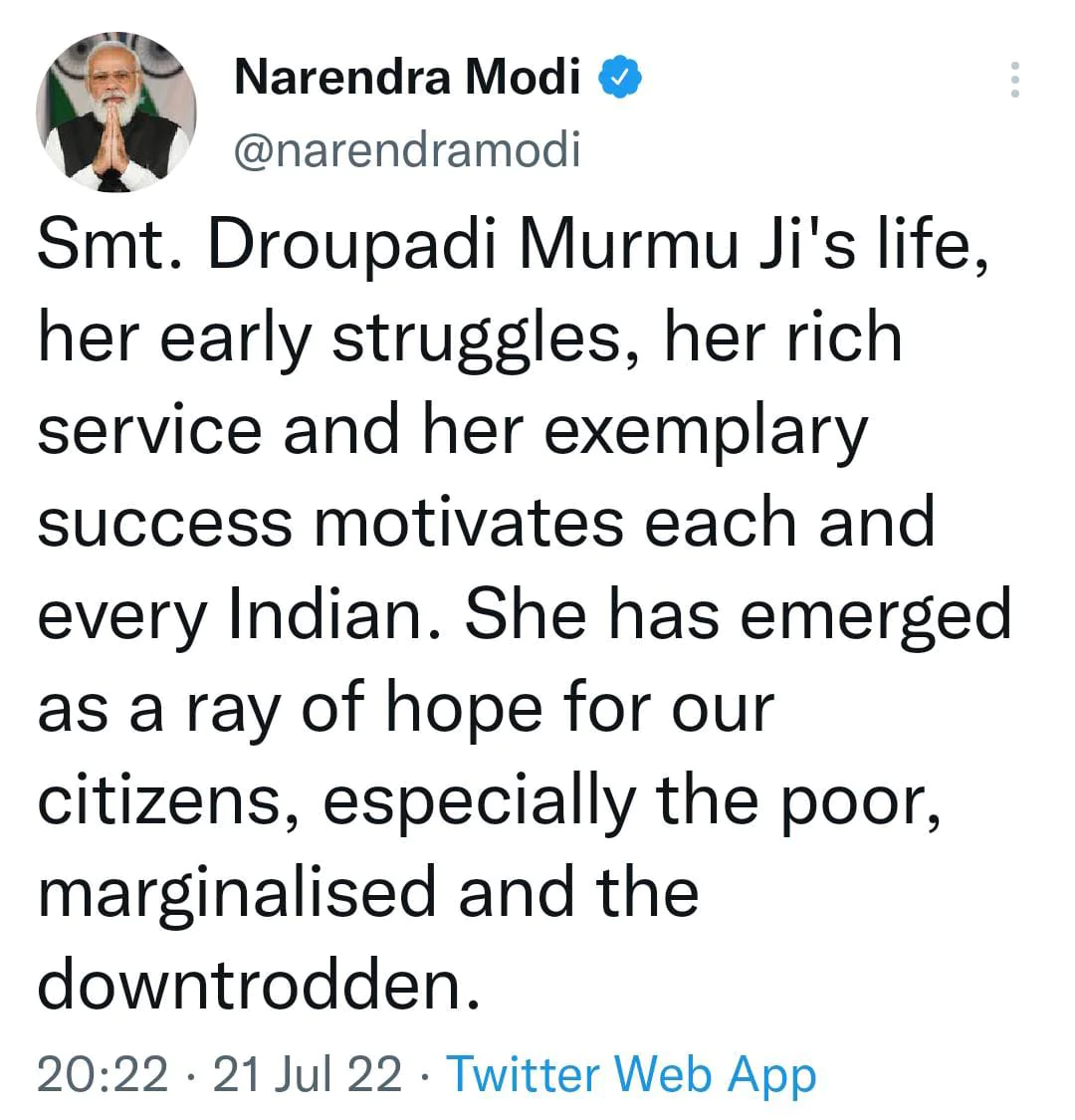 "The incontrovertible fact that I became President isn't an accomplishment; it's the accomplishment of each underprivileged Indian. After being sworn in by the Chief Justice of India, in the impressive Central Hall of the Parliament, Madam President declared, "My election is proof that the poor in India may aspire and fulfil them too.”

The resilience of democracy is demonstrated by the fact that a poor girl from a far-off tribal area can wield India's highest constitutional post. In her speech, she noted that her trip from Mayurbhanj, one of the least developed districts in India in Odisha, to the Rashtrapati Bhavan was "not my achievement; it's the achievement of each unfortunate in India."