Maj. Gen. Ajay Sah is the Chief Information Officer at the Synergia Foundation.

On September 15th, Prime Minister Scott Morrison of Australia, Prime Minister Boris Johnson of U.K. and President Joe Biden of the U.S. jointly announced the formation of the AUKUS Defence and Security Partnership. The joint statement left no doubts that the focus was entirely on defence cooperation - "Through AUKUS, our governments will strengthen the ability of each to support our security and defence interests, building on our longstanding and ongoing bilateral ties. We will promote deeper information and technology sharing. We will foster deeper integration of security and defence-related science, technology, industrial bases, and supply chains. And, we will significantly deepen cooperation on a range of security and defence capabilities.”

While China was not named, the inference was quite clear in the opening paragraph of the joint statement, which states, “we resolve to deepen diplomatic, security and defence cooperation in the Indo-Pacific region.” Artificial Intelligence, quantum technology, cyber warfare, long-range strike capabilities and a nuclear component are primary areas covered by the pact. It may be noted that in all these areas, there is direct competition between China and the U.S. for supremacy.

The icing on the cake for Australia was the arming of the Royal Australian Navy with at least eight nuclear-powered (not nuclear-armed) submarines, “to bring an Australian capability into service at the earliest achievable date.” Australia would be the second country, after UK, with whom the U.S. will be sharing its closely guarded nuclear submarine technology.

France, which was left out of the partnership, was further humiliated as Australians promptly cancelled a $ 66 billion deal for French conventional submarines. Petulantly, it recalled its ambassadors from the U.S. and Australia in protest.

The Chinese were not pleased, and their Washington embassy released a statement urging the three countries not to use nuclear exports to “play geopolitical games” at the cost of third countries. The timing of such a declaration was not surprising as tensions with China see no signs of abating, and after the muddled American exit from Kabul, the Chinese lead the pack in making conciliatory manoeuvres towards the Taliban.

With a powerful UK carrier group venturing into the South China Sea and Australia at odds with China on several counts, the partnership further reinforces the strong military ties that bind these three nations. 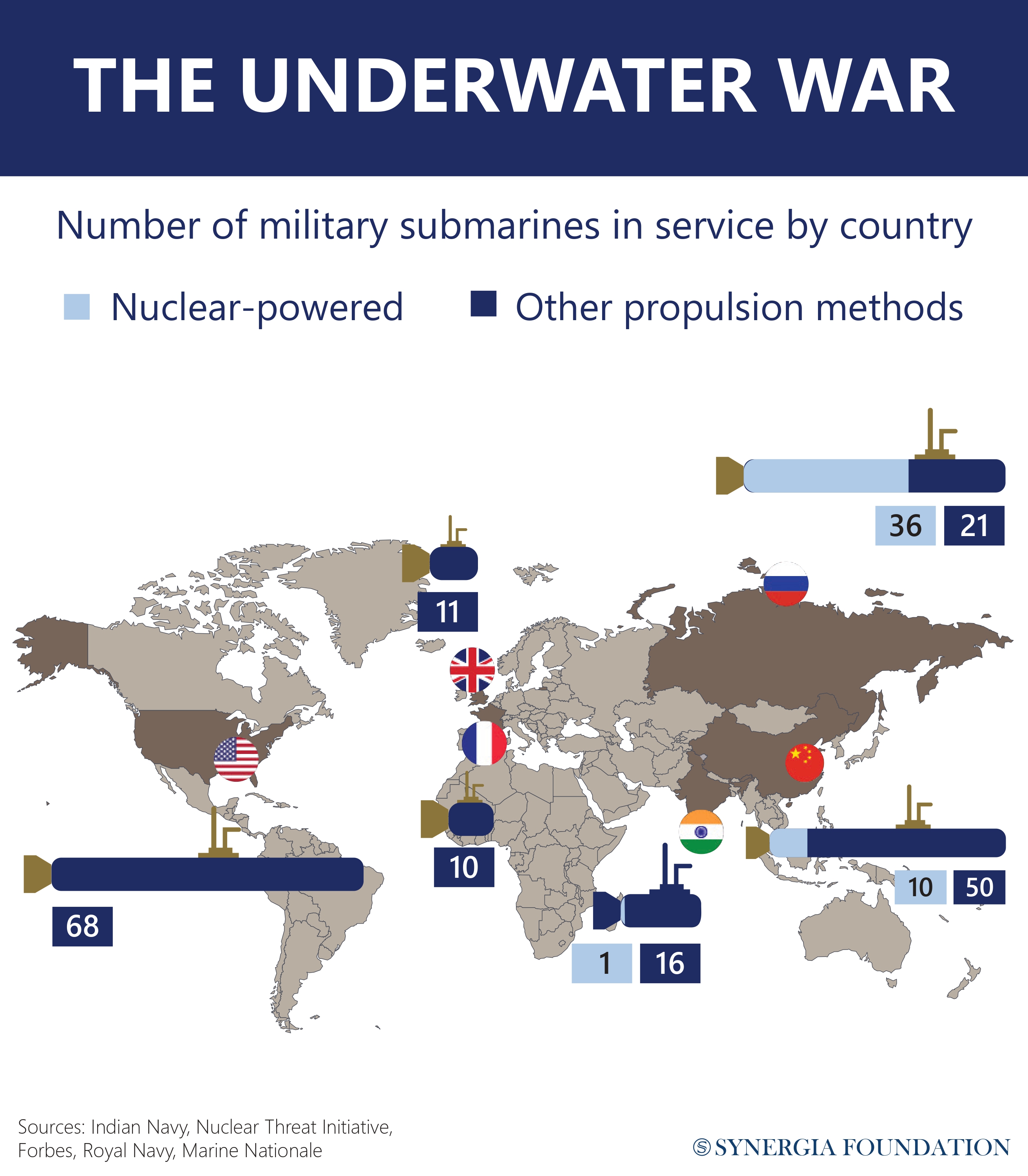 A PARTNERSHIP STEEPED IN BLOOD

While critics may derogatorily call this an exclusive ‘Anglo Saxon Club’, the linkages between the three allies go deep into history. The AUKUS may be a brand-new acronym, but the strong military partnership between these three nations goes back very far. Both the U.S. and Australia are “Anglosphere nations” sharing a common pedigree, having been British colonies that banded together in various Western alliances.

During the early part of the Pacific campaign in World War II, Imperial Japan had knocked on the doors of Australia, having conquered New Guinea and the Solomon Islands. It was the U.S. armed forces who, along with ANZAC forces (Australian and New Zealand), evicted the Japanese forces from these threatening deployments in the Pacific at the cost of thousands of lives.

After the war, as the power of Great Britain subsided and Pax Americana reigned supreme, especially in the southwest Pacific, the ANZUS treaty of 1951 was signed between the U.S., Australia, and New Zealand. Under this pact, the Australians fought shoulder-to-shoulder with their American allies in Korea, Vietnam, Gulf War and Iraq. After 9/11, the pact was invoked for the hunt for Osama bin Laden in Afghanistan. Since 2011, American Marines and Air force units have been regularly rotated in bases within Australia for joint training, despite strong protests by China and Indonesia.

It is apparent that the alliance aims to face up to the growing maritime strength of the People’s Liberation Army in the Indo-Pacific region. The emphasis on nuclear submarines is significant as it highlights China’s lack of capacity to deal with this deadly and stealthy weapons system. Aircraft carriers, the backbone of American hard power, are increasingly becoming vulnerable to growing Chinese capability in stand-off attacks on these behemoths.

The Eurasian Times (17 September), has quoted an American military expert, Douglas Macgregor, who highlights this vulnerability, "The unified effort of the expanding submarine fleets is a profoundly important development. China’s missile defences can cope with any challenge on the surface, but they are powerless to cope with modern nuclear-powered subs in deep water. This raises yet again the spectre of a truly effective blockade at sea.”

Nuclear submarines will enable the Australian Navy to supplement American (and Indian} naval capacity in the Indo Pacific in a significant manner, allowing Australian platforms to roam freely over the larger Pacific region, including the hotly contested South China Sea. This would definitely act as a dampener on Chinese assertiveness.

Chinese observers feel that the growing success of the Chinese Maritime Silk Route through the region is the ultimate target as the western countries feel threatened by its economic success and potential. However, unless China provokes an incident or gives cause, the pact will have no reason to interfere with Chinese trade within RCEP or with its Asian trading partners. This is important, as it will allow China to continue to increase its comprehensive national power, which is largely based on its economic strength, allowing it to continue to progress towards its ultimate goal of overcoming the U.S. as the No 1 economic power in the world.

Having been kept out of the loop, France has been seething throughout the process. It also stands to incur severe financial loss due to the cancellation of the submarine deal. This could be because of the independent line that Paris has always maintained vis à vis Washington, unlike London, which has always toed the line of its larger partner. Clement Beaune, the Secretary of State for European Affairs, was scathing in his criticism of UK, calling it "vassalisation".

France is in possession of a chain of territories in the Indo Pacific with a military presence in many of these areas. There is a genuine belief in the country and elsewhere that France could have contributed in a meaningful manner to any joint defence in the region. The Opposition in France has asked the government to quit NATO in protest, an extreme step that appears a bit far-fetched at this juncture when Russia is on the rise in Eastern Europe.

Vietnam, and the Philippines, and to some extent, even Indonesia, may gain confidence if the AUKUS makes a visible presence in the Indo Pacific in general, and the South China Sea in particular. The littorals of the South China Sea would hope that the renewed interest of powerful western countries towards this region would help in curbing Chinese belligerence. Japan and South Korea, deeply enmeshed with China for economic reasons, have kept a low profile and are unlikely to openly take sides at this juncture.

For India, the coming together of this powerful combination with a focus on the Indo Pacific would be good news as it increases the military pressure on Chinese ambitions. At some point in time, India too, with its fast-increasing maritime capabilities, could find itself joining forces with AUKUS in a credible manner.

The Quad (Australia, India, Japan, and the US.) pales in comparison, considering the unambiguous military content of the AUKUS and the clear determination to resort to military means. Sadly, the QUAD lacks this robust response mechanism, as all the participating nations are not confident of each other’s ability to respond militarily in support of any beleaguered member. However, the U.S. has assured that the AUKUS will have no negative impact on the QUAD, something which has been reiterated by the U.S. Deputy Secretary of State Wendy Sherman in her recent visit to India.